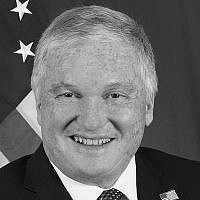 The Blogs
Adrian Zuckerman
US Ambassador to Romania (2019-2021)
Apply for a Blog
Advertisement
Please note that the posts on The Blogs are contributed by third parties. The opinions, facts and any media content in them are presented solely by the authors, and neither The Times of Israel nor its partners assume any responsibility for them. Please contact us in case of abuse. In case of abuse,
Report this post. 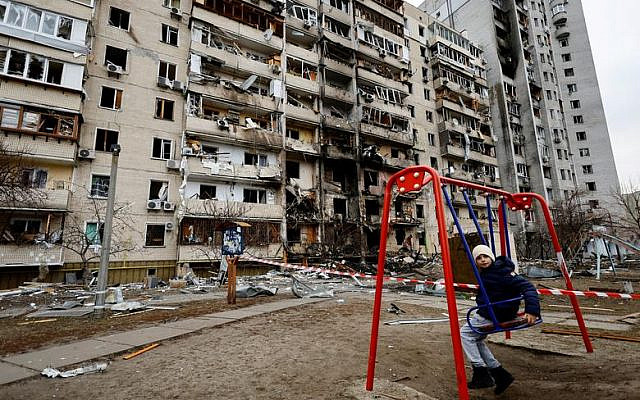 A child sits on a swing in front of a damaged residential building in Kyiv, Ukraine February 25, 2022. REUTERS/Umit Bektas
We are now some three weeks into the unprovoked invasion of Ukraine by Russia and its criminal leader Vladimir Putin. The Russians have embarked on a course to intentionally  kill innocent civilians, men, women and children. Russian troops have unabashedly continued razing Ukrainian cities one by one and targeting civilian escape corridors, trains, buses, schools, hospitals, residential buildings and children’s playgrounds. The EU and the US continue to send mixed messages despite tough talk, supplying various military supplies and imposing sanctions.  The military equipment and supplies sent are still not in sufficient quantities for a decisive Ukrainian victory and the economic sanctions against Russia still have numerous carve outs and exceptions. The Western allies have failed to take all the available steps necessary to stop the genocide and the destruction of a democratic country begging for help.

World War III. No one wishes to have a war with Russia or start World War III.  However, let us look realistically at the current state of affairs. The US and the EU have caused substantial if not critical damage to the Russian economy and supplied sufficient arms to Ukraine to stay in the fight , but not win decisively.  It may be argued that we are already at war with the Russian criminal dictator. The failure to acknowledge this reality, however only emboldens the criminal and allows him to continue killing innocent civilians.

Only an unequivocal and resolute response will stop this war and the rising civilian death toll. All possible and available military aid and equipment, including aircraft, should be given to Ukraine. The EU and the US must stop being ambivalent. The US should not tell Putin what the US is not going to do militarily.  Putin should be told in unequivocal terms that the US and its allies will do everything necessary to stop him – everything should be on the table and that as a matter of fact the US  and its Allies are getting a bigger table!
Mixed and equivocal statements by the US and EU are counterproductive. Flip flops by the US with regard to the delivery of  MiGs by Poland and the failure to impose some form of no fly zones are incomprehensible. The US and NATO have supplied thousands of Stingers, Javelins, Mpads and various other military systems and munitions. Why not the planes that Ukraine so desperately needs? Why not allow Ukraine to protect its citizens and end this Russian invasion more decisively?
The US and the EU can not check its humanity in at the door and continue to watch, day after day, the continuing crimes against humanity – innocent civilians being targeted and exterminated. Putin is engaging in genocide! It has to be stopped – now!
Sanctions against Russia and its oligarchs must not have any exceptions or carve outs. The oligarchs with assets in the US, or elsewhere in the world, should not be able to transfer such assets to their relatives, friends or entities controlled by them. The banking sanctions must be against all Russian banks not just some and all transactions with Russia banned – no exceptions for oil and gas transactions. Not having unequivocal sanctions gives hope of survival to the genocidal criminal. He should have no hope!
All sanctions should stay in place so long as Putin and the other criminals perpetuating crimes against humanity are in control in Russia. Sanctions should only be lifted when Putin, Lavrov and the rest of the Russian criminals are in the dock in The Hague on trial for war crimes and crimes against humanity.
A no fly zone is immediately needed to prevent the further slaughter of innocent civilians. NATO can not be held hostage by a criminal blackmailer. The primary purpose of NATO was to protect Europe against exactly this type of Russian expansionist terrorism. The people of the world are watching NATO’s response. NATO’s failure to act decisively to stop Russian expansionism and genocide will not be forgotten and will fracture NATO. The Baltic states and other smaller countries are watching with their hearts in their throats. If NATO folds or continues with ambivalence in the face of Russian nuclear threats now, what are the chances that NATO will step up and help countries that are smaller than the state of Delaware when they are overrun by the Putin? The very same nuclear threats will be made again by Putin.
NATO’s promises of protecting such countries pursuant to Article 5 are not particularly compelling given recent history.  What will the US, the EU and NATO do when one of the Baltic states, Moldova or other country in Europe is invaded by the Russians?  Putin will again claim that he is saving such country and its people from Nazis, locusts  or some other similar nonsense and the western allies will decide that such conflict is an internal issue and not risk the threat of war with Russia. History already has proven this to be so with the Russian invasion of Donbas and Crimea in 2014 and again  some two weeks ago. The tripartite agreement in 1994 between the US, UK, and Russia with Ukraine to guarantee Ukraine’s territorial integrity if it surrendered its nuclear weapons is not even mentioned anymore. It is but a forgotten piece of paper and just another breached agreement by a dictator with nuclear weapons. Article 5 should not be another forgotten piece of paper, but history has shown that it may in fact be otherwise. The US and the EU can not afford not to act unequivocally now.  The future of the alliance is at stake as confidence in the alliance wanes.
The time for the US and its allies to act decisively and lead from the front, like President Zelensky,  is long overdue. The US and NATO must have a proactive plan and strategy. Putin must be told unequivocally to stop killing civilians now! Putin should be told that all Russian troops in all of Ukraine need to be withdrawn starting immediately and if not completed within 48 hours NATO and the US will use all available resources on the table!
The lack of resolve in the face of continued crimes against humanity is a shameful abdication of moral, political and military leadership.
The benefits of ridding the world of Putin now would be enormous. Not only would Europe be a better place, but so would many other places around the world. The people of Cuba, Venezuela, Syria as well as  many other countries around the world would be able to join the modern world and share the benefits of peace, freedom and democracy. Russian expansionism, authoritarianism, violence and war would no longer be a global threat.
This is the time for the US to step up and lead its NATO allies in ending Putin’s genocide and reign of terror.
About the Author
Adrian Zuckerman is a Romanian-born American lawyer and is currently Of Counsel to DLA Piper. He was the United States Ambassador to Romania from 2019 to 2021, when Romania signed a 10-year defense cooperation agreement with the U.S. In January 2021, President Iohannis awarded him with Romania’s highest civilian award, the Star of Romania, Order of the Grand Cross.
Related Topics
Related Posts
Comments