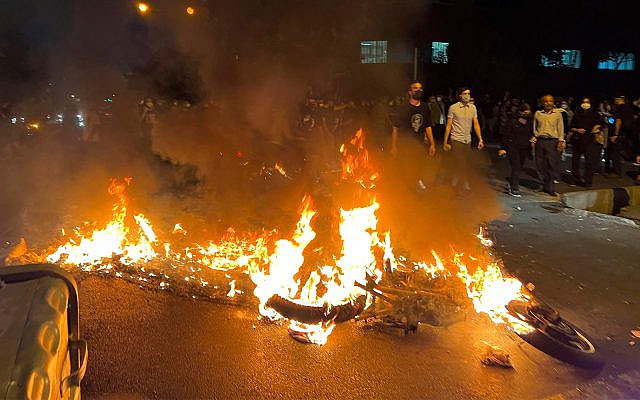 Iranian demonstrators take to the streets of the capital Tehran during a protest for Mahsa Amini, days after she died in police custody, on September 21, 2022. (AFP).

The people, especially the women of Iran who are standing up to the ayatollahs and their morality police, have deservedly won our admiration for their courage in standing up to the face of tyranny. The Ayatollahs and their police have responded to the protesters with horrible vengeance, an action which has been condemned by the entire civilized world. Still, before we get carried away in our admiration, we should consider some sobering facts.

What the media do NOT report. The media objectively report the number of protesters killed in the revolt as being between 75 and 100. The media does NOT report that according to the Tehran Times, between March 21, 2021, and March 16, 2022, 3,904 people were killed in Iran in traffic accidents. In other words, it is more dangerous to drive in Iran than it is to protest.

The media objectively report that there is widespread support among the Iranian people for the protests. One Israeli newspaper, without any factual support, even claimed that a “majority” of Iranians support the protesters. What the media do NOT report is how many people are actually protesting. The largest number I have seen estimated is “thousands”. Yet, Iran is a huge country with a population in excess of 84,000,000 people. Even if there are 100,000 protesters (which I doubt) that would still be 1/840th of the population of Iran.

While we do not know how widespread the support for the protesters within Iran is, we do know that the focus of the protests is the morality police enforcing the Iranian law which requires women to wear hijab properly. I live in Israel, a country where Muslim women have the absolute right to chose whether or not to wear hijab. While many Muslim women do not, the great majority do. I see them daily. I suspect that the overwhelming number of Iranian women do not support the protesters on this issue at all.

It has been widely reported that Iran has a huge number of educated people. While that is true, it is educated people who have brought Iran so close to having nuclear weapons. Iran is justly proud of having been a great nation, at least since Cyrus the Great, who lived in the sixth century BCE. The Ayatollahs may be horrible, but they have a long,  proud tradition and are not stupid.

There is no reason to believe that if the revolt is successful, Iran’s policy towards either the United States or Israel will change. Iranians have viewed the United States as “The Great Satan” for over 40 years and with good reason. In 1952, Iran democratically elected a Prime Minister who Washington thought was too far to the left. The CIA led a revolt and he was replaced by the Shah of Iran, one of the most brutal dictators in the world, whose secret police, SAVAK (an organization established by the CIA), arbitrarily arrested, tortured, and murdered thousands of people. The Shah remained in power until the people, led by the Ayatollahs, overthrew him in 1979. In October, 1979, Jimmy Carter, the President of the United States, gave the Shah permission to come to the United States for medical treatment. The Iranian people were outraged and in November, 1979 took over the American Embassy with 52 Americans still inside. That occupation continued for the rest of Carter’s term of office, which ended in January, 1981.

Emotionally, like everyone else, I hope that the protesters prevail; it would be wonderfully romantic. Yet when I try to evaluate the situation objectively, I doubt that they will.  As happens too often in the world, evil, this time in the form of the Ayatollahs, is too strong. Even if the protesters seem like the good guys now, I wonder how the people of Israel and the United States will feel about them, if there is a war between Iran and Israel.