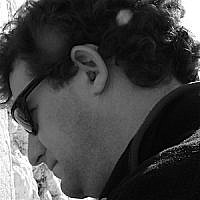 The Blogs
Neal Gold
Apply for a Blog
Advertisement
Please note that the posts on The Blogs are contributed by third parties. The opinions, facts and any media content in them are presented solely by the authors, and neither The Times of Israel nor its partners assume any responsibility for them. Please contact us in case of abuse. In case of abuse,
Report this post.

Wednesday afternoon, I looked across the table at my Jewish studies classmate, her eyes puffy from bouts of spontaneous crying. She looked like she might dart from the classroom at any moment.

Her tears were not just an expression of disappointment that her candidate lost the election the night before. The tears were from fear. In the election of Donald Trump, she saw the national validation of a sexual predator, and it terrifies her.

And she wasn’t alone. The campaign is over, after unprecedented months of vitriol and hate speech — but the scapegoating and fear-mongering will linger.

In the fallout from Tuesday’s election, I’ve seen dozens of letters of “support” — from the university where I study, from the progressive Jewish day schools my kids attend, and from lots of rabbis. But most of the “Messages to Our Community” I’ve read have been a bit tone-deaf.

There are recurring themes in these community messages:
(1) We are dismayed, but are careful to toe a non-partisan line;
(2) We acknowledge that many of you are upset;
(3) Our democracy is strong, and we should come together in unity;
(4) Our political process is valid, and we should support President-elect Trump;
(5) I’m here for you if you need a sympathetic hug.

I hear well-intentioned and empathetic voices acknowledging the “grieving” of members of their communities. But there’s a big disconnect between their genteel and politically prudent words (“After all, there are Trump supporters in our community…”) and the reason why their constituents feel as they do.

The anger, fear, and sorrow are not the sour grapes of people whose candidate lost the election. If that were the case, we would say: Grow up! This is democracy, and on occasion your candidate loses. Sometimes Republicans win, sometimes Democrats win, and it’s a civically healthy thing to be punted periodically into the loyal opposition.

It’s about real fears that exist in red-state America that Democrats fail to grapple with. But it’s also about a Trump campaign that stoked that fear and anger with anti-Semitism, racism, and sexism in terms both coarse and subtle. It’s about embracing hate as a path to power.

Well-meaning community leaders should remind themselves that there are many people who are genuinely afraid about what the election means. The uptick in violence against Muslims, the validation of so-called “locker room” verbal violence against women, and legitimization of hate against non-whites (including Jews) and immigrants is not going to end tomorrow. In all likelihood, God preserve us, it will be emboldened.

It is far too simplistic simply to post on Facebook, “I don’t have the words…” Nonsense. If ever there were a time for words, it’s now.

This is an interfaith moment; a time to make sure that victims of hate speech know that we will not let anything happen to them. It’s a time to reach out to neighbors who may be feeling genuinely scared by the validation of hate and say: We are with you, and we will continue to be with you. The Jewish community needs to reach out to Muslim neighbors, African-Americans, Latinos, the LGBT community, and others and say, “This must be terrifying for you. As a Jew, my community too has been targeted these past few weeks—but not quite as directly as yours has been. I recommit today to be your partner. An attack against you is an attack against me.”

Are there real fears permeating vast swaths of white America that the left has ignored for too long? God knows there are. But responsible political leaders know how to address those fears without scapegoating, race-baiting, and inciting hate and violence.

Responsible community leaders now need to remind us: Sometimes bullies win the battle in the short term, but people of good faith can work together to ensure that those victories are short-lived.

About the Author
Rabbi Neal Gold is a teacher, student, and writer based in Massachusetts. In 2015 he was a delegate for ARZENU, the international Reform Jewish movement, at the 37th World Zionist Congress. He has led congregations in New Jersey and Massachusetts, and loves teaching about Torah, Israel, and offbeat ways in which people do the work of World-Repair. He is active in interfaith projects, especially Jewish-Muslim dialogue.
Related Topics
Related Posts
Comments