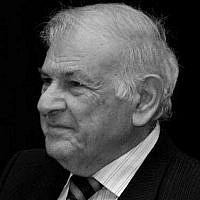 The Blogs
Abraham Sion
Apply for a Blog
Advertisement
Please note that the posts on The Blogs are contributed by third parties. The opinions, facts and any media content in them are presented solely by the authors, and neither The Times of Israel nor its partners assume any responsibility for them. Please contact us in case of abuse. In case of abuse,
Report this post.

A few weeks ago, a woman who was bringing her young children to school, was stabbed in the back, allegedly a terror attack. The perpetrator fled the scene, but was known to live in Sheikh Jarrah, in Jerusalem. Humans with any semblance of decency and compassion can imagine how sick and brainwashed a person must be to violate a young woman, who is simply escorting her children to school. Yet the world sees that it has happened to a Jew in what is considered “occupied Jerusalem,” and disregards it.

For decades, Arab families have rented property in this neighborhood. And over and over again, there are outbreaks of violence purportedly over these same rented houses. Just this past May, the issue of Sheikh Jarrah was even used as an excuse by Hamas to start launching rockets once again at Israel… as if some apartment buildings in a small Jerusalem neighborhood would justify such behavior.

As a former deputy state attorney of Israel, I can say clearly: Do not be confused by the ongoing legal battles. By law, this land rightfully belongs to its Jewish owners. The tenants may live there according to their rental contracts, but the buildings rightfully sit in the State of Israel. Allow me to explain, with some historical background.

The contested houses in the Sheikh Jarrah (or its Hebrew name: Shimon HaTzadik) neighborhood were purchased back in 1875 by Jewish immigrants who had to abandon them when Israel’s War of Independence broke out. When Trans-Jordan invaded the western part of Palestine in 1948, it had the avowed object of annihilating the Jewish state. The neighboring army captured the eastern part of Jerusalem, together with Judea and Samaria, which was later annexed, and renamed the “West Bank,” ostensibly to detach it from its Jewish heritage, and connect it to Trans-Jordan. The army then took hold of Jewish-owned buildings and allowed Arab families to occupy them.

When Israel liberated East Jerusalem from the Jordanian illegal occupation in 1967, the administrator general of Israel took hold of Jewish owned property in Sheikh Jarrah. In 1972, these properties were returned to their Jewish owners, who in turn agreed to allow the Arab residents to remain there as tenants. I believe this to be the very crux of the issue, but it is slightly more complex than this.

As I explain in my book, To Whom Was the Promised Land Promised? the Jordanian annexation of the West Bank was not recognized by any other country except Britain and Pakistan. It wasn’t even recognized by the Arab League or by any other Arab country. Therefore Jordan could not transfer ownership rights that it never had! Consequently, the annexation did not alter the original legal position of East Jerusalem or any of the West Bank.

Unfortunately, much of the rhetoric we see these days focuses on a very specific time period, and neglects to recognize the historical fact that these properties were indeed owned by Jewish families prior to the annexation. All of these Jewish families fled their homes once they were occupied by Jordanians, but by law, they do still hold the legal titles to this land and these contested properties. Presumably the voices who deny these facts are likely those same voices who use terms like “West Bank” and consider East Jerusalem as Occupied Palestinian Territory. Unfortunately many of these voices come from the Jewish people, including from its own Knesset members.

Like the concept of Groundhog Day (the movie), we continue to experience the same thing over and over again when it comes to these issues. We see the mainstream media and international organizations ignoring history. They disregard the original treaties and resolutions that make up this region, namely, the Balfour Declaration, the San Remo Resolution and particularly the British Mandate for Palestine, all of which form an integral part of international law and are still binding. We even hear Israeli leaders, politicians, lawmakers, and leaders of the Jewish community buying into this revisionist version of history, where only a small bubble on the continuum of history is taken into consideration.

Until we learn the facts and remind ourselves of the foundations of this country, we will continue to experience “Groundhog Day” in areas like Sheikh Jarrah. We have had enough stabbings, missiles, and violence and must not stand for it.

It is incumbent upon all those who love peace and pursue justice to go back to the books, see the larger picture, and start speaking up against such acts of terror in the name of “Palestine.”

About the Author
Abraham A. Sion, Ll.B., Ph.D. (Cantab) is a professor emeritus at Ariel University, where for over a decade he chaired the Center for Law and Mass Media, former deputy state attorney of Israel, and author of the book, To Whom Was the Promised Land Promised? He earned his expertise in the Arab-Israeli conflict through intensive research, international and local conferences, lectures, articles, think tanks, and debates in TV and radio shows for over 30 years. Simultaneously, Prof. Sion practiced law in civil and administrative matters.
Related Topics
Related Posts
Comments