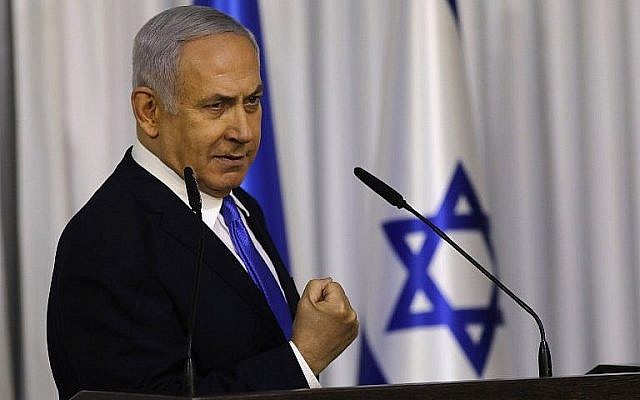 Prime Minister Benjamin Netanyahu gives a televised statement after a meeting of his ruling Likud party in Ramat Gan on February 21, 2019. (Menahem Kahana/AFP)

Israel’s upcoming general elections, especially after the Attorney-General’s announcement that he plans to indict the Prime Minister on charges of bribery, fraud and breach of trust (pending a hearing), are being framed around one issue: the personal fate of Binyamin Netanyahu. The rare consensus on this depiction is sweeping: it encompasses politicians, journalists, commentators and the public at large. Everything else – security, foreign affairs, the economy, social relations, religion and state – is being shunted aside as all involved on the various sides of the political spectrum focus almost obsessively on every possible factor that may affect whether Bibi will remain in power or not.

Such an approach is simplistic in the extreme. It fails to take into account the fact that critical issues cannot be ignored: some are too immediate to be put on hold; others serve the interests of the contestants. How these are brought into play, by whom and for what end, will have a direct impact on the results of the elections and their aftermath.

Nobody knows this better than Mr. Netanyahu. He understands full well that no substantive topic is irrelevant and has already shown how he can use the power of his office to manipulate these questions to his advantage. And – given the personal stakes involved – he may proceed to throw caution to the wind in the process. The implications of this strategy go far beyond the specific outcome of these elections and affect fundamental questions of Israel’s identity and, ultimately, legitimacy. His rivals would do well to grasp this dynamic and adjust their campaign to deal with what really matters to Israel and its future.

The first major concrete subject on the agenda, obviously, relates to security broadly conceived. It has been relatively easy to gear the political conversation to focus on who is most capable of handling Israel’s defense in these uncertain times. Netanyahu’s response to the Blue and White Party’s triumvirate of former commanders-in-chief has been to belittle their records and challenge their experience while emphasizing the close connection between his leadership and stability. This may turn out to be a greater battle than the heretofore unchallenged “Mr. Security” thought.

While the debate continues along these lines, Netanyahu has been able to highlight his supposed superiority in the area of foreign affairs and to begin to introduce specific issues into the campaign. The first relates to the proposed “deal of the century” with the Palestinians. How to respond to President Trump’s initiative (whose formal unveiling has been postponed to after the elections) allows the Likud under Netanyahu to simultaneously underline the close relationship between the Prime Minister and the American President and the extremism of some elements within his own camp (not to speak of the potential danger of his opponents who are ready to entertain concrete possibilities for reaching a lasting agreement with the Palestinians).

Much more important, however, are the election-time policies of the present coalition regarding the deteriorating situation on the ground both in Gaza and the West Bank. The decision to freeze the transfer of funds to the Palestinian Authority further undercuts its authority and foments unrest. Gaza continues to be on the verge of implosion, which cannot but spill over to Israel. Growing uncertainty around concrete security questions (much more than hypothetical threats emanating from Iran’s possible nuclearization) just before a vote clearly favors the incumbents – as does the constant hint that it may be necessary to use military means to quell Palestinian discontent during the next few months.

The ability to separate these threats from the vagaries of the campaign cannot but boost the current government’s position and diminish the appeal of those bent on replacing it. The tendency of Benny Gantz, Moshe Ya’alon and Gaby Ashkenazy to echo Netanyahu’s positions on many of these issues will make it even more difficult for them to claim that their run for office is something more than personal. Only very recently did Benny Gantz begin to point to an alternative when he stated that “Israel should not rule over another people.” Without further efforts to expound on this differentiation, Netanyahu can continue to invite fear and justify escalation on the Palestinian front. A much more pointed treatment of this critical issue is already overdue.

The same dynamic is also visible in the economic sphere. Netanyahu has gone out of his way to present himself as the guru of Israel’s economic leap forward during the past 15 years. In the process, he has been able to minimize the contributions of his successors in the Ministry of Finance and to point his verbal darts directly at Yair Lapid, who served in this post in his previous government. By accusing Lapid of being “a terrible Finance Minister” and jumping on his new partner in the leadership of the Blue and White party, Avi Nissenkorn (the powerful Secretary-General of the Histadrut trade union umbrella organization), for his championship of the rights of the veteran unions at the expense of the struggling disadvantaged, he is, once again, touting his own horn and giving himself another boost in what is still a highly personal and undoubtedly emotional campaign.

But Netanyahu is hard-pressed to hide some worrying economic trends. Growth rates are down to 2.2% – a serious reduction in comparison to previous years. The government’s deficit has grown enormously in the past year, mortgaging the country’s economic future for political expediency. Netanyahu’s Likud can easily blame the current Finance Minister, Moshe Kahlon, for some of these problems, thus also helping to eradicate him politically. It can also caution against the Labor party’s ongoing quest to rehabilitate Israel’s welfare state – suggesting that this is nothing short of socialism. But it will be difficult for him to sustain this line given the palpable rise in the cost of living (the price of most basic products has risen since the beginning of the year and people are beginning to feel even more strapped than usual).

The key rivals of the Prime Minister have still to shift from the defensive to the offensive on these issues. They have yet to challenge Netanyahu’s recent policies and to suggest ways to stabilize the economy, promote greater socioeconomic equity and alleviate the rising cost of daily life in the country. If they don’t do so quickly, they will allow the Prime Minister to escape any responsibility for the current economic situation and suppress the much-needed debate on these matters.

This is also true for any serious discussion of social issues in the country. As an integral part of the quest for survival, Netanyahu has magnified and elaborated the social divisions that helped him win three elections during the past decade. He has further jacked up his attacks on Arab society in Israel. He has gone out of his way to taunt the old, primarily Ashkenazi elites (who have not been in office – with brief exceptions – for over four decades). He has created a social category, “the Left” (composed of anyone who doesn’t agree with him), at which he directs his purposefully incendiary barbs (Netanyahu’s fear-mongering rhetoric has been honed to new heights in recent weeks). All these are tools of the trade, sharpened to bolster the community of Netanyahu loyalists.

Social divisions, however, continue to fester. Netanyahu may have gone one step too far by urging the far-right electoral alliance of the National Union and Jewish Home to incorporate the openly racist Otzma Yehudit party which continues the Kahanist tradition. The backlash in opposition circles at home and the Jewish community abroad has been vigorous and predictable. The discomfort within the right is, perhaps less so. The attempt to suggest that this is but “a technical” arrangement is distinctly feeble and largely unconvincing.

It is as yet unclear whether the tactic of denouncing those who disagree with the Netanyahu camp and depicting them as enemies of the state will work this time. Many Israelis are looking for commonalities, not differences – sentiments which have yet to be amplified and put more squarely at the core of the campaign by those seeking to replace the (too) long-serving Prime Minister.

Issues do matter in what is turning out to be an ugly, vicious, campaign. Since those in power can play with the context in which they are introduced and how they are parlayed, those who are striving to put an end to the Netanyahu era – instead of just banking on their integrity and the hope they offer for a semblance of normality – should take the lead in raising the issues proactively in order to differentiate what could be from what has been. These are more important to the outcome of the elections than one can imagine and will ultimately determine Israel’s trajectory in the years ahead.