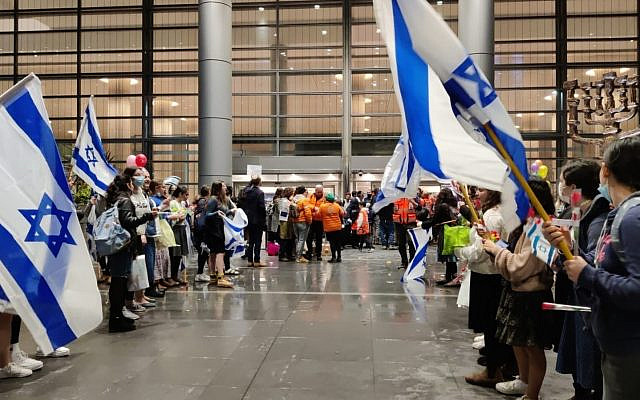 The invasion of Ukraine challenges us to ask questions about ourselves. What is the role and place of Jewish people in the broader story of humanity? What is the role of the state of Israel in a global society? What type of world do we want to be part of, and what are we willing to do to make it that way?

Two years ago, we discovered that global pandemics are not relics of history. Last week the Russian invasion of Ukraine demonstrates that major land wars did not end in the first half of the 20th century. The passage of time itself does not remedy problems; it is human endeavor that can overcome them.

Global efforts have combated COVID, leading to its retreat. The world’s response to the invasion of Ukraine will determine whether this type of aggression can be successful in our day and age. For the sake of the world, the answer must be a resounding no. The invasion must fail.

Whether Israel chooses to be an active partner in these efforts is a statement about the nature and role of the Jewish state.

Certainly, the primary role of the Jewish state is to be a haven for the Jewish people in our homeland, for us to be free to guide our destiny and allow it to unfold. But the prophetic vision of the Jewish people’s return to their homeland was not merely one of security and comfort, but also one of global leadership and national responsibility. The prophets envisioned Israel as a beacon for humanity and a light unto the nations, “from Zion the Torah shall for forth and the word of God will resound from Jerusalem” (Isaiah 2:3).

The prophetic vision of Israel as a moral center was not lost on the state’s founders. Israel’s state symbol, the menorah, was chosen in part as a recognition of the biblical vision of Israel being as a light unto the nations, and Israel’s declaration of independence establishes the state on the values of “freedom, justice and peace as envisaged by the prophets of Israel.” Part of Jewish nationhood is a sense of responsibility for the world. In the current crisis this means taking a strong stand and not dragging our feet or remaining ambivalent.

The Regression of our National Idealism

The call for moral conduct on a national level is not blind to the needs of realpolitik. A balance must be found between promoting values and ideals on the global arena and protecting our national interests, which is a moral imperative in its own right.

But seventy-four years after the birth of Israel, we must raise the question: have we found that proper balance? Are we even searching for it? Do ethical concerns factor into our international relations, or is the parochial interest alone guiding our relations with the world?

One might hope and assume that as Israel has grown and become a regional superpower both economically and militarily, we would be more able to realize our broader values on the global stage and allow ethical concerns to take a larger role in guiding our decision-making on a national level. However, in many areas it appears that we have gone in the opposite direction.

In the 1950’s and 60’s, when Israel was frail economically and politically, we stood out as a superpower in humanitarian foreign aid, ranking second in the world for the percentage of GNP devoted to humanitarian causes. Today, we are second to last on this list among OECD countries – beating out only Latvia.  (source: Foreign Aid and Humanitarian Aid: Favorable Policies for Israel, by Sarel Weinberger).

Israel has also regressed in its willingness to absorb refugees from crisis-struck areas. True, it would be unrealistic to expect small, densely populated Israel, with our demographic need to maintain a Jewish majority, to throw open the doors of immigration to the “huddled masses yearning to breathe free,” as Emma Lazarus’s poem on the Statue of Liberty puts it. But Israel could at least abide to the specific criterion of the 1951 Geneva Refugee Convention, instituted in part as a response to the Holocaust. Israel has been decidedly draconian in its refusal to implement the convention with regard to refugees that have crossed our borders.

But it wasn’t always so. One of the first decisions prime minister Menachem Begin made after entering office in 1977 was to give asylum to hundreds of Vietnamese refugees, explaining: “We never have forgotten the boat with 900 Jews, the St. Louis, having left Germany in the last weeks before the Second World War… traveling from harbor to harbor, from country to country, crying out for refuge. They were refused… Therefore it was natural… to give those people a haven in the Land of Israel.” By all accounts a practically-minded politician, Begin understood that our history as a people calls on us to live up to a higher standard of political morality.

Israel’s arms industry is another unfortunate example of a failure to practice even minimal ethical oversight in the pursuit of profit and national interest. While the industry itself is an existential necessity for defense, economics and international relations, there is a moral imperative to refuse to sell weapons to certain actors. Israel sells weapons to countries engaged in egregious crimes against humanity, such as the repressive military regime of Myanmar. Attempts in the Knesset to pass even the most anemic laws reviewing weapons sales to such countries (for instance, legislation initiated in 2016 by MK Yehuda Glick or in 2018 by MK Hilik Bar) have failed to pass.

Even tactically, approaches that focus exclusively on self-interest often have long term consequences. Israel had perhaps no choice but to support the Shah of Iran, but Israel’s well known aid for the Shah’s brutal and hated secret police, SAVAK, planted seeds of hatred among the oppressed Iranian people, the consequences of which we feel until this day.

With regard to Russia, it is true that Israel and Russia share an interest in preventing Iranian entrenchment in Syria, and that Israel has relied on Russia’s tacit permission to carry out its missions in Russia-controlled Syrian airspace. This is one of the main explanations for why Israel has remained cautious about taking a clear stance regarding the invasion of Ukraine. But regimes and regional problems come and go, while making decisions based on what is right shows strength and determination and can earn friends and allies that may ultimately change the balance of national interest as well. The democratic world order, led by the United States and Europe, is rapidly rediscovering its voice and purpose as it unifies behind Ukraine and against Russia. Israel wants to place itself firmly in that camp.

Why should we care about Ukraine? Some have argued that given their long history of brutal antisemitism (the current Jewish leader notwithstanding), Israel owes nothing to the beleaguered country. Others consider the prophecy of the pagan biblical magician Bilaam, who called the people of Israel “a nation that shall dwell alone,” to be an inevitable fate, or even an ideal. But as Rabbi Jonathan Sacks of blessed memory argued poignantly in “Future Tense,” Bilaam is an enemy of the Jewish people, and throughout the Bible, isolation is not a quality to be sanctified but a challenge to be overcome. A cynical fatalism about our place in the world can become a self-fulfilling prophecy.

Our response to the war in Ukraine, along with our policies regarding humanitarian aid, refugees and foreign weapons sales, are litmus tests about the nature and meaning of the Jewish State. It behooves us to take a clear and unequivocal ethical stance regarding the Russian invasion of Ukraine, as Natan Sharansky has argued since the first day of the invasion https://www.timesofisrael.com/sharansky-israel-must-take-a-clear-moral-stand-against-putin-over-ukraine/. After two thousand years of exile, we must strive to build a nation worthy of our painful and heroic journey through history. We must transcend our satisfaction with our own survival and success, and realize the broader ethical role the Jewish people must play in the world. Our prophets would expect no less.