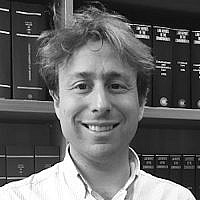 The Blogs
Adam Wagner
Apply for a Blog
Please note that the posts on The Blogs are contributed by third parties. The opinions, facts and any media content in them are presented solely by the authors, and neither The Times of Israel nor its partners assume any responsibility for them. Please contact us in case of abuse. In case of abuse,
Report this post.

In a week in which the leader of the Labour Party has again been accused of being incapable of understanding the concerns of the Jewish community, it was reassuring to see a High Court ruling that shows sensitivity and respect for Jewish rituals.

Coroners hold an ancient judicial role and it comes with significant responsibility. They investigate deaths when the cause is unclear or suspicious. Their investigations can delay burials and this has important implications for Jewish and Muslim communities, whose customs require burial within 24 hours.

Most coroners across the UK have good working relationships with Jewish and Muslim communities. Not Mary Hassell, the senior coroner for north London. Last year, she decided to implement a ‘cab-rank’ policy,
stating that “no death will be prioritised in any way over any other because of the religion of the deceased or family”.

The policy was challenged by a local Jewish woman, Ita Cymerman, and the Adath Yisroel Burial Society. They were successful.

Lord Justice Singh and Mrs Justice Whipple forensically deconstructed the senior coroner’s policy and at the same time highlighted how important human rights and equalities laws can be in protecting religious life in the UK.

There is a lot to admire in this detailed ruling but, ultimately, it came down to common sense. That’s no surprise as the European Convention on Human Rights was drafted by a Conservative Party lawyer, David Maxwell Fyfe, who said it was based on classic British values of “tolerance, decency, kindliness”.

The complaint against Ms Hassell was, fundamentally, that she failed to show the decency to respect the practices of Jewish and Muslim communities and the need to bury their dead within 24 hours.

The legal arguments were that she was acting irrationally, in breach of the human right to religious observance and in a discriminatory way.

The court was scathing. It found that her “rigid policy” prevented the coroner or her officers considering religious factors at all when deciding whether to prioritise burials. This meant the coroner had abdicated a key responsibility of any public authority in a liberal society: to balance the rights and interests of service users.

She had acted in a discriminatory way. She failed to respect the human rights of religious communities.

The senior coroner’s supporters argued that, in prioritising religious believers, this amounted to “queue jumping” because other members of the public would suffer delays. The court rightly rejected this.

The judges compared the coroners’ service to a court, which must prioritise when listing cases, or a hospital where some patients will require urgent treatment, meaning others may have to wait longer.

It is wrong to look at this as a ‘zero sum game’, where just because a public authority is sensitive to the needs of one group, others will miss out.

“Reasonable people in society”, the court anticipated “would not regard that as ‘queue jumping’”. It wasn’t about favouritism, “but that there should be a fair balance struck between the rights and interests of different people in society”.

Ultimately, human rights are about dignity, fairness and balance. The Jewish and Muslim communities’ dispute with Ms Hassell has lasted years, and she was, as the court made clear, “acutely aware of the impact her policy might have on certain minority religious communities”.

It is unfortunate that it took a court judgment to highlight the lack of basic fairness in the senior coroner’s policy.

One upside is that this judgement brings home how human rights laws can help protect religious communities. It is reassuring to know the courts ‘get’ religious rights.

As the judges said, it comes down to a matter of ordinary humanity.

About the Author
Adam Wagner is a barrister specialising in human rights. He is the founder of the award-winning human rights information project, RightsInfo
Related Topics
Related Posts
Comments