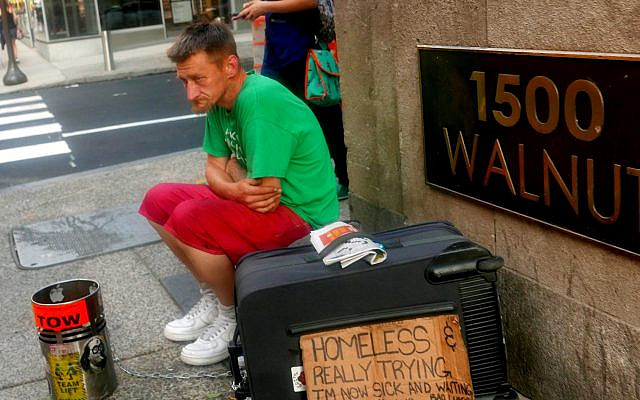 Not so sunny in Philadelphia (Dan Perry photo)

Some Americans love guns and some hate abortion rights. Some hate immigration and some love bashing Europeans. Some want lower taxes and some hate political correctness. In Israel you’ll find grateful dual citizens. These groups are impressive to be sure, but they overlap, and they’re not quite enough to reelect one Donald Trump.

If Trump is reelected, it will be because beyond all those issues there also is a narrative that says the economy is doing great. Trump claimed it in last week’s State of the Union Address. Despite his record with facts, all kinds of people believe it, and many Democrats are prepared to concede it, and as a result some people otherwise horrified by Trump may back him.

So let’s examine the proposition.

For starters, we are told that the economy is chugging along, as measured by GDP growth.

During the three years of Trump the average real GDP growth rate was 2.5%, according to government figures. During Obama’s eight years growth averaged 1.6%. But that is misleading. The economy declined by 2.5% in 2009, Obama’s first year, because of the Great Recession that started under George W. Bush. Obama turned it around immediately with a huge stimulus program, and factoring out that first year his average was 2.5%, same as Trump’s. Bush’s average was 2.2% per year, and Bill Clinton’s was a whopping 3.9%. 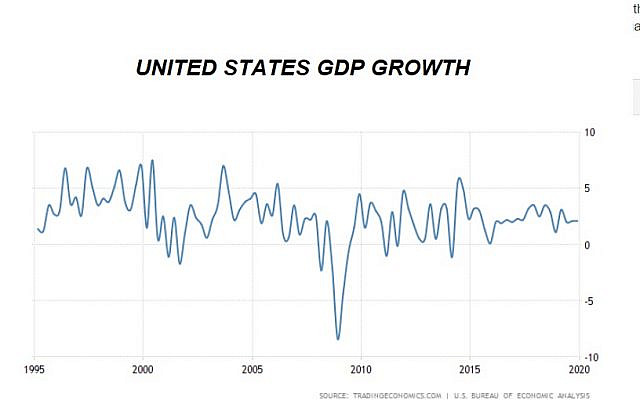 So Trump’s growth rate is decent, not great. It is widely credited for job creation which supposedly has Americans feeling good about their pocketbook. Let’s look at that next.

Unemployment is, at around 3.8%, indeed historically low, around the level that it was at the end of Clinton’s terms. Under Bush it spiked, reaching around 10% during the Great Recession. Since then it has been steadily declining, partly and probably mostly as a result of Obama’s stimulus. The graph below shows Trump continuing the decline but if anything at a slower rate. When Trump took over unemployment was just under 5% — and now it is just under 4%.

Furthermore, wage growth has been stagnant, in large part cancelled out by inflation, so some people are employed but broke. 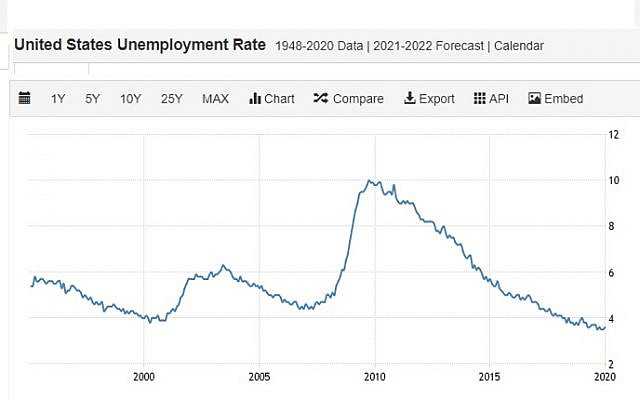 How was this modest success achieved?

Well, the federal budget is now $4.4 trillion – over 10% higher in real terms than the average under Obama. Defense spending alone rose from $767 billion at the end of 2016 to a record $989 billion today, a 29% bump. This means Trump has essentially seen the Obama stimulus and raised it.

But he has also passed tax cuts which were his signature legislative achievement (and which disproportionately benefited the very wealthy; see this report by the House Committee on the budget). That has reduced revenues.

Republicans used to be the party of fiscal responsibility. Can they really be raising spending while cutting income? That would be fiscally irresponsible! Let’s see what’s going on.

The budget deficit (spending by the federal government which Republicans falsely claim to detest, minus income which they really detest) stood at $585 billion in the last year of Obama, according to official figures. In 2018, that figure rose to $779 billion and in 2019, with the government shutdown thrown in, it scaled the heights of $1,092 billion, a level only exceeded at a brief high point of the post-meltdown stimulus, and then quickly reined in.

Every such deficit adds to the national debt, which predictably now is in the red zone. According to government figures, the national debt at the end of the Obama years stood at $19.6 trillion. Today is has passed $23 trillion and it is estimated to reach $24 trillion by the end of Trump’s first term in 2020. That is a roughly 20% increase over the Obama deficit created largely in order to save the world economy, when there was basically no choice.

Since the increase exceeds the GDP growth we have just looked at, this means debt as a proportion of the economy has increased. Indeed, it is now estimated at over 100% of the economy, which no economist in the history of the world has ever recommended. If the US were a family, it would owe more than it earns.

The debt per citizen is over $70,000 and it is rising overall by about $10,000 per second (see this amazing debt clock). So the Republicans are borrowing from the future at a level unprecedented in human history to make the present look good. 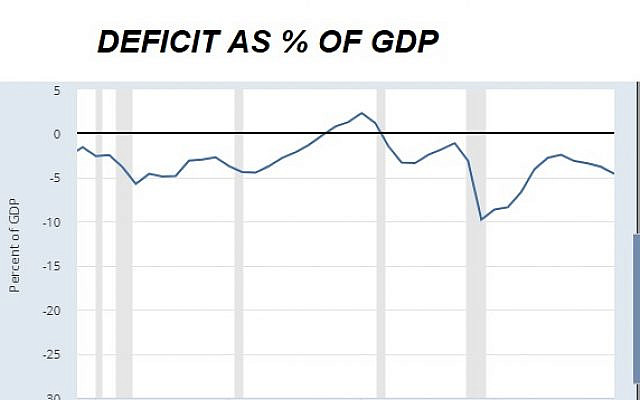 “Trump inherited a strong recovery, yet managed to further increase the deficit,” says James Gutman, a hedge fund trader and former economist at Goldman Sachs.  “Trump’s fail on the deficit is nothing short of colossal. It is textbook Third World country.”

Trump will say trade is a factor, and he is all about making America great again through cleverer trade deals. He would have a point: when a country runs a trade deficit it sometimes borrows money to pay for it, increasing its budget deficit. So how is America doing when it comes to trade? According to the Commerce Department, the United States in 2018 (the last year available) posted an $891.2 billion trade deficit, compared to $735 billion in 2016. Even trade with China reached a record $419 billion. That’s not so great. It’s definitely not too much winning.

Of course, the markets have gone through the roof. The Dow Jones Industrial Average has shot up from around 18800 on Election Day in 2016 to 29300 today – more than a 50% increase. This is generally understood to result mainly from the lowered corporate taxes which have bolstered corporate profits, meaning Trump does deserve credit for it.

Just over half of US households have any money in the stock market, according to polls, and much of that is in pension-related funds. But almost 85% of the stock market is owned by 10% of households, meaning its massive gains benefit primarily the rich and amount to a massive wealth transfer in the direction of the rich in the country that is already the developed world’s least egalitarian in terms of both income and wealth distribution. The stock market is great, but it goes up and down and it is not the economy. 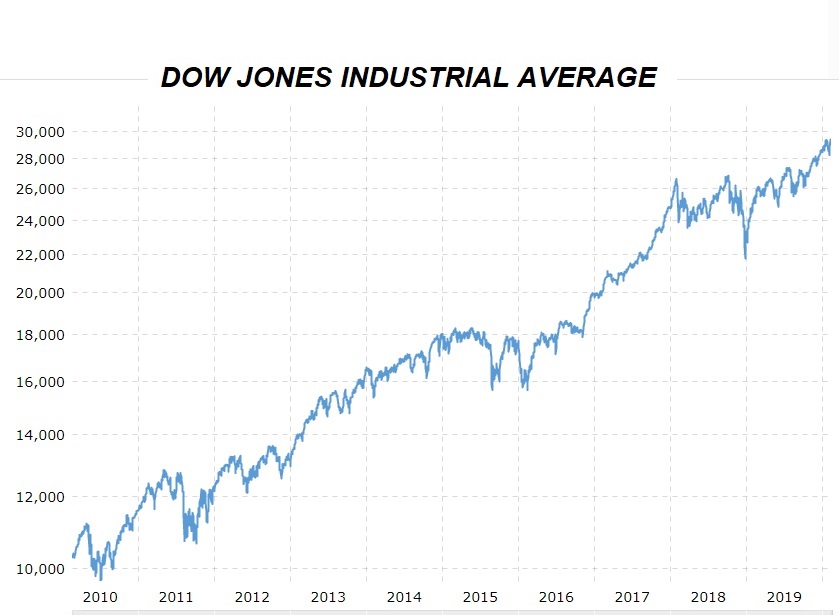 So let’s wrap it up with bow: What we have here is a partial continuation of the Obama stimulus combined with a tax cut to corporations which has inflated the stock market. This benefits many Americans at least a little but amounts to a massive borrowing from future generations who will have the greatest debt in human history weighing them down. If they finance it by printing money that will drive inflation and tank their economy.

None of this snake oil is all that new. Similar untax-and-spend shenanigans were seen under George W. Bush, and we know how that ended. In Israel, the government is similarly hoping that a misleading good-economy narrative largely based on an overvalued shekel will get voters to reelect a prime minister who is systematically undermining their brittle democracy and is about to spend years in court facing charges of bribery, fraud and breach of trust.

In the United States, the Republicans are obviously hoping that the masses will be blinded by the shiny toy of the surging stock market. They surely know you cannot fool all the people all of the time. But can you fool enough of the people at the right time in the right traumatized states to eke out another victory in the Electoral College?

I don’t think this election should be all about the economy – but if the Democrats don’t take a baseball bat to the good-economy narrative, quite possibly the answer is yes, you can.