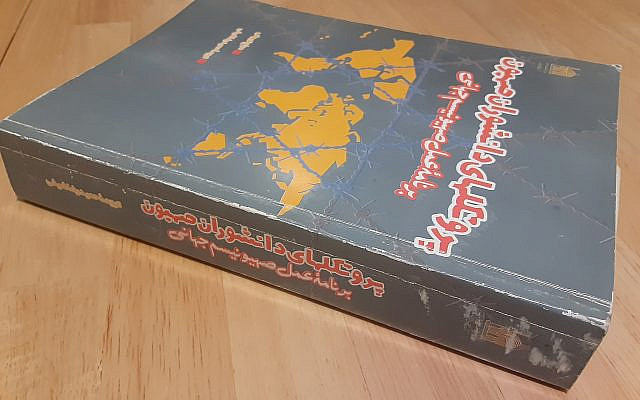 A 500-page Farsi language copy of the Iranian regime's anti-Semitic Protocols of the Elders of Zion, photo by Karmel Melamed

Late last month, the B’nai Brith Canada organization permitted me the special honor to discuss the plight of Jews who lived in and fled the Khomeini regime in Iran over the last four decades during an online program they held honoring Jewish refugees from the Arab land and Iran during the 20th century. I also had the unique opportunity to discuss the horrific story of the execution of my innocent Jewish relative, Ebrahim Berookhim at the hands of the Ayatollah’s regime 40 years ago.

Following the event, I received positive feedback from various friends and acquaintances, but curious questions from an Israeli scholar and a political analyst who asked me via email some difficult questions regarding America’s Iranian Jewish community and Iran. They asked; “Why don’t we hear more from Iranian Jews like yourself in America about the horrors they experienced at the hands of Iran’s Islamic regime? And why hasn’t the larger American Jewish community’s leadership shared more of the Iranian American Jewish experiences with this regime with the wider Americans when it comes to the Iran Deal?” My responses to these two gentlemen were not pleasant for them to hear but a painful reality that must be addressed if U.S. Jews are serious about facing the threats from the Islamic regime in Iran to the survival of world Jewry.

The vast majority of Iranian Jews in America do not openly or actively speak about the horrors they or their families experienced at the hands of Iran’s Islamic regime because of their fear of apathy. During the last 41, Iran’s once vibrant 80,000 strong Jewish population has steadily decreased and the community has resettled in Israel, Europe, New York and in its largest numbers in Southern California. Many of those who fled Iran, were forced to leave behind their homes, businesses, properties and assets which were collectively valued in the multi-millions of dollars and set up new lives from scratch in America.

For these four decades, the Iranian American Jewish community has fully integrated into the larger fabric of American society by working hard, educating its children and achieved success in the business world, academia, entertainment field and even politics. For a number of these Iranian American Jews, the hopes of returning to Iran have long faded and the old Iran that they left behind has died for them. They have little if no interest in Iran today nor do they wish to get politically involved in matters related to Iran as they’ve moved on with these new lives in America and are pursuing the American dream.

At the same time there are a number of Iranian Jews in America who still have friends and family members living in Iran who fear the Ayatollah regime will harm their loved ones if Iranian Jews in the U.S. speak ill of the regime. I hear from many of these Iranian Jews in my own community in Los Angeles from time to time who have a genuine fear of the regime and do not like my criticism of the Islamic regime when it comes to their mistreatment of Jews and other religious minorities living in Iran. These individuals prefer to remain silent when it comes to the on-going anti-Semitism and long history of terror the Ayatollah regime has unleashed on Iran’s Jews solely because of their fear of what they regime may do to those 5,000 to 8,000 Jews still living in Iran. All of this must change today!

Those Jews who have chosen to remain in Iran despite the severe persecution they face today in Iran, must not hold back the vibrant community Iranian Jews in the U.S. from sharing their experiences at the hands of this demonic Ayatollah regime. When the largest Jewish population in the world which is located in Israel today faces a potential nuclear Holocaust, all Jews–  especially Iranian Jews who were among the first to face the violent oppression of this Ayatollah regime have a responsibility to speak up about the horrors they encountered in Iran.

It’s Time to Speak Up!

We as Iranian Jews in America not only understand the Farsi language declarations of genocide repeated by Iran’s Ayatollahs, but the majority of our families have experienced the evils of the Iranian regime firsthand. The Iranian American Jewish community has never undertaken its own serious, comprehensive and relentless public advocacy campaign to educate the larger non-Iranian American community about the very real and emerging dangers of Iran’s fundamentalist Islamic regime to the Middle East and the entire world.

This education of the greater public about who the Iranian regime consists of and its objectives is essential in helping to transform the U.S. government’s approach to Iran’s threats against non-Muslims throughout the world. Who better than Iranian Jews, who experienced firsthand anti-Semitism, random arrests, unceasing tortures and imprisonments at the hands of this Iranian regime, to speak out today about the evil nature of the regime? Who else but Iranian Jews, who have had family members randomly executed by the Iranian regime, to educate the public about the regime’s unmerciful thugs?

Who else but Iranian Jews, who have witnessed their Christian, Baha’i, Zoroastrian, Sunni and other religious minority countrymen experience unspeakable abuse and murders at the hands of the Iranian regime’s secret police, to speak out? Who better than Iranian Jews to educate the larger American public about how Iran’s Supreme Leader Ali Khamenei and other regime strongmen that are very openly calling for the elimination of all people who do not follow their radical form of Shia Islam?

While in recent years, individual Iranian Jewish activists and some smaller groups in the Los Angeles community and New York have indeed spoken out about the cancerous spread of the Iranian regime’s evil among its own people in Iran and the entire Middle East, much more of this type of public advocacy must be done on a larger scale by Iranian Jews in the U.S. Additionally, while Iran’s President Rouhani and Foreign Minister Zarif attempt to put on a happy and nicer face for the Iranian regime with their public relations campaigns, we as Iranian Jews have a duty to remove the smiling mask from their faces in order to expose their true anti-Semitic nature and evil actions to the American public.

In 2015 and 2016 when the Obama administration’s officials and talking heads took to the media in America to “sell” the shameful Iran Deal to the American public, the larger Ashkenazi Jewish community’s leadership in many major organizations failed to include the voices of many activists in the Iranian Jewish community in order to push back against the flawed deal and the false narrative that the Ayatollahs in Iran could be trusted. Why weren’t the stories of Jews in Iran being imprisoned, tortured and executed by the Ayatollah regime shared by America’s Jewish leaders at that time? Why didn’t Jewish groups like AIPAC, AJC, ADL, the Conference of Presidents of Major American Organizations ever raise the case of Habib Elghanian, the Jewish leader of Iran who was wrongfully executed by the Ayatollahs in May 1979? In my humble opinion, this was a major failure on their part because the stories of what Jews experienced under this Ayatollah regime could have been effective in persuading American Jews, that this Islamic regime in Iran cannot be trusted because of its past failed record against the Jews.

And therefore today as a new U.S. administration is seeking to pursue a “new deal” with this demonic regime in Iran, the larger Ashkenazi Jewish leadership in the U.S. must include voices from the Iranian American Jewish community to discuss the true nature and serious dangers that this Ayatollah regime posses to Jews worldwide and to humanity. Just as American Jews proudly launched a very vocal and public campaign against the former Soviet Union for its mistreatment of Jews and human rights abuses in Russia during the 1970s and 1980s, so must they again today launch the same type of campaign against the Iranian regime. As this Ayatollah regime seeks nuclear weapons and constantly threatens a new Holocaust against the Jewish people, “Never Again” should not be a slogan, but we need to rather speak out more vocally against this regime. If we continue to remain silent about the human rights crimes carried out by the Iranian regime against all Iranians and the terrorism it sponsors, we have committed an even greater crime.