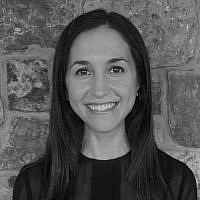 The Blogs
Sara Himeles
Apply for a Blog
Advertisement
Please note that the posts on The Blogs are contributed by third parties. The opinions, facts and any media content in them are presented solely by the authors, and neither The Times of Israel nor its partners assume any responsibility for them. Please contact us in case of abuse. In case of abuse,
Report this post. 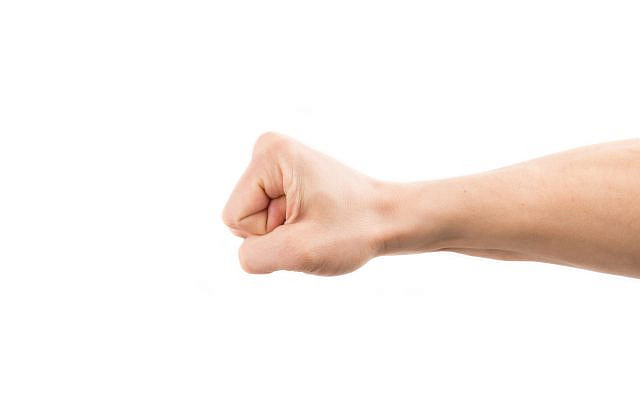 Menachem Begin's father told him: "Each and every finger of yours is very weak alone, but together they can make a fist to punch. This is how the Jews should act.”

Two weeks ago, I had a conversation that will always stick with me. I was at the ADL conference in New York City, chatting with two high school seniors named Ali and Mia.

I asked what brought them to the conference, and they explained that they were both leaders at their schools, educating their non-Jewish peers about antisemitism. They attended public schools in Brooklyn and New Jersey.

They told me about how antisemitism had gotten a lot worse at their schools in the past two years with more bullying of Jewish students, and how their schools’ Holocaust education was insufficient to teach people about what happened.

Ali and Mia said that many of their peers didn’t even know what the word “antisemitism” means. These two young women had taken it upon themselves to educate their peers to fill in the gaps in their public schools’ curriculum.

When I told them about where I worked, they asked me if I could show them Unpacked for Educators so that they could use our resources to teach their non-Jewish peers about antisemitism. I told them to stay strong and that they were incredible leaders.

There was something about this conversation that made me think on a visceral level: “We are really in a different place with antisemitism.”

It hit me in a way that felt close to home. I attended a public school in Ridgewood, New Jersey where I was often the only Jewish student in my class. Although I did not experience antisemitism, I was well aware of being different.

On one level, as I spoke with Ali and Mia, I could imagine what it would be like to be in high school and feel the responsibility of educating your non-Jewish peers about the Jewish people.

On another level, as an educator today, I realized that we are not only educating students to respond to antisemitism.

For those of us who teach in religious schools or youth groups (where our students attend public schools or secular private schools), we are educating our students to be educators themselves, and leaders in the fight against antisemitism. As antisemitism rises, it is often our students who are on the front lines.

This conversation, and all of the antisemitism recently, has made me (and many others) feel that we are in a different moment. The question that has been on my mind is: “Where is all of this headed and how can we stop it?”

With respect to antisemitism, I’m concerned that we as a Jewish community are not always responding in a way that is effective to counter the threat we face.

Let me explain, through something I learned from the documentary on former Israeli Prime Minister Menachem Begin, “Upheaval.” It was what Begin’s father told his son while growing up in Poland before the Holocaust.

Begin attended a Polish state-run high school and the University of Warsaw where he and other Jewish students experienced frequent antisemitism. According to historian Avi Shilon, Begin’s father said to him:

“Look at your fingers. Each and every finger of yours is very weak alone, but together they can make a fist to punch. This is how the Jews should act.”

This simple metaphor about Jewish unity is so relevant to us today to combat antisemitism. We will be stronger and better positioned to overcome this challenge if we respond in a united way rather than a politically divided one.

For example, this past September, when nine student groups at Berkeley Law School passed a bylaw that they would never invite any speaker who supports Zionism or Israel to campus, it prompted a polarized debate among Jewish thought leaders.

On one side of this debate were people who argued that Berkeley had now created “Jewish-free zones” similar to Nazi Germany.

On the other side were those who argued that this idea was preposterous, and only meant to stoke panic and fear. They downplayed the students’ petition, noting that only a small number of student groups signed it and that the Hillel and Chabad houses on campus were thriving.

As my colleague Noam Weissman and I wrote at the time, in the debate over whether Berkeley had “Jewish-free zones” or not, and whether this label was justified or not, something important was lost — and it was something the vast majority of the Jewish world could agree on.

The students’ petition to exclude anyone who supports Israel as a Jewish state was wrong. Judaism and Jewish identity cannot be separated from our ancient roots in the land of Israel. But this simple, important message got drowned out in the debate over the provocative label.

For the most part, we missed this opportunity after the Berkeley incident. When we fall into predictable political patterns in response to antisemitism, we are missing a critical opportunity to educate and tell our own story.

Why is it that we remain politically divided after antisemitism? Oftentimes, the source of our political division is the particular identity of whoever is perpetrating the antisemitism.

However, if the antisemitic incidents of the past few weeks (along with the history of antisemitism in general) have demonstrated anything, it’s that anti-Jewish hate comes from all political ideologies, races and religions.

In the past few weeks, we saw antisemitism from white supremacists, Black athletes and celebrities, and anti-Zionists. We heard antisemitic statements from U.S. politicians on both the right and the left. As FBI Director Christopher Wray recently put it, American Jews are under threat “from all sides.”

It is time for us to put to rest the idea that there is one community that drives antisemitism. Antisemitism is a threat no matter where it comes from. Throughout history, people of all ideologies, races, and religions have promoted it. We must call out all antisemitism regardless of the perpetrator’s political identity.

As a time when antisemitism has reached record levels, we must change the conversation. Instead of responding in a politicized way, let’s respond in moral, educational, and other constructive ways. Let’s call out antisemitism as wrong, and also explain why it is antisemitic and why it is wrong. Let’s remember that our battle is with antisemitism, not with each other.

Whether the story is about Kanye West, Kyrie Irving, Dave Chapelle, or Berkeley Law School, there is a “silver lining” to each one. Each antisemitic statement or action is an opportunity to educate others while the world (or some part of the world) is paying attention.

This is a huge opportunity. As anyone in the media industry knows, you want to create content that is optimized for SEO (trending keywords on Google and social media platforms). When you create SEO-driven content, it is more likely to reach a large audience.

At Unpacked, we joke that we should thank Kanye, Kyrie and Dave Chapelle for making Jewish keywords so popular, making it that much easier for us to reach millions of people with engaging, entertaining content about antisemitism and Judaism. From this perspective, as New York Times columnist Bret Stephens recently wrote, “Thank Ye very much!”

Jokes aside, as horrible and scary as the recent antisemitism is, each incident is an opportunity to educate a captive audience that is already paying attention. Let’s not waste one precious opportunity to provide desperately-needed education about antisemitism and to respond in a united, constructive way, rather than a politically-divisive one.

UCLA Professor Dov Waxman points out that “Most people do not know the long history of malicious myths and conspiracy theories about Jews that have circulated for centuries. Nearly half of Americans told pollsters they do not even know what the word antisemitism means.”

Each antisemitic incident is an invitation to us to fill the education gap. After Kanye and Kyrie’s antisemitism, we can educate about the Black Hebrew Israelite movement and the thoroughly-debunked theory that Black people rather than Jewish people today are “the real Jews.”

After Chapelle’s monologue on SNL, we can teach people about how Jews don’t “run” Hollywood (studios today are small units of giant corporations, run by all kinds of people). But Jewish-Americans, many of whom were recent immigrants, were some of the founders of key Hollywood studios along with others who were not Jewish.

In all of these cases, we should continue naming the classic, age-old antisemitic tropes that are being invoked today, explain how pushing these claims led to violence in the past, and share why they are still dangerous. If we call out antisemitism and explain why it is antisemitic and wrong, then we will be using our words in a way that actually pushes back against hate.

This begs the question: can education alone really end antisemitism once and for all? Brandeis professor Jonathan Sarna offers a compelling answer to this question.

Using the metaphor of the four sons from the Passover Haggadah, Sarna said that we must distinguish between the “Rasha” (the wicked son) who seeks the Jewish people’s destruction, and the “Tam” (the simple son) who is simply ignorant.

Education may not “cure” everyone of the world’s oldest hatred, but I still believe it remains the best way to combat antisemitism.

Jewish tradition underscores the power of words, the power of words to create worlds. Words can sow violence and division or they can promote love and understanding. For all of the inciteful, antisemitic rhetoric that is being spewed by some celebrities and politicians, we must respond with our own words of morality and education. If more of us speak out against antisemitism and help educate others, together, our words will have a powerful ripple effect. That is how we can best fight back against antisemitism.

If you’re looking for resources to educate others about antisemitism, check out the following relevant videos and articles:

How to deal with Kanye’s antisemitism (video)

The Jews who built Hollywood (video and resources)

Why is antisemitism still around? (video and resources)

Whose fault is antisemitism? (video and resources)

Do Jews cause antisemitism? (video and resources)

Is anti-Zionism the same as antisemitism? (article and resources)

The conspiracy of the origin of Ashkenazi Jews (video and resources)

The origins of antisemitic conspiracies (video and resources)

About the Author
Sara Himeles is an editor at Unpacked and OpenDor Media, a Jewish media and education company. Previously, she handled communications for Secretary of Homeland Security Janet Napolitano and presidential candidate Barack Obama. Sara received rabbinical ordination from Ziegler at American Jewish University in Los Angeles and her BA from the University of Pennsylvania.
Related Topics
Related Posts