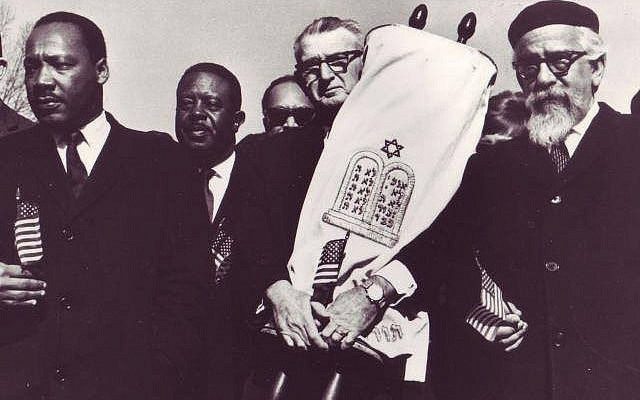 The nation’s response was palpable. Communities all over the US were hurting, but no community was hurting more than the black community, as many saw what happened to Eric Garner as a testament to how black Americans are viewed and valued by law enforcement, and by this country.

The Jewish community’s response to this tragedy was overwhelming solidarity. Leading rabbis in New York were arrested for protesting a grand jury’s final decision not to put Paltaleo on trial for killing Garner. Jewish groups in New York dedicated to racial justice sought to bring more awareness and action to this tragedy and others like it.

This isn’t a new thing. The Jewish community has always been there for us in times when we felt the most isolated. Many may know of the HBO documentary “Say Her Name – The Life and Death of Sandra Bland.” That film was made by a Jewish couple who used it to tell the story of Sandra Bland, and got it shown in schools, community centers and police academies as a part of de-escalation training.

In 1937, upon witnessing a picture of a black man being lynched in New York, Abel Meeropol wrote a poem that became one of the most popular jazz songs of the century, Strange Fruit. Made popular by jazz singer Billie Holiday’s chilling performance, Strange Fruit shined a spotlight on lynchings in America and moved hearts across the country. To this day, singers and activists perform this song as a commemoration of Holiday and a call for racial justice and harmony in the US. This is the pattern in the Jewish community; solidarity. Solidarity in the form of protests, articles, forums, and vigils. Arguably the most consistent ally of the black community has been the Jews.

In spite of this, however, the black community does not reciprocate in this allyship. Attacks against Jews are at an all time high, and have been rising for years – too many for us to pretend that we don’t see it. In Brooklyn, a rabbi was beaten with a stone. Just a few weeks ago, a group of Jewish men and boys were chased and attacked in a series of attacks in Brooklyn. And most recently, an Orthodox Jewish man was stabbed and slashed in upstate New York on his way to synagogue for prayer.

There are many more, from verbal harassment to other physical beatings, and these are not isolated incidents. As a matter of fact, the vast majority of the attacks of Jews in New York, and particularly in Brooklyn are by black men, and some are self-professed followers of Louis Farrakhan, the Nation of Islam leader who most recently referred to Jews as termites among other hateful rhetoric. Black Americans across the country should be speaking out against these types of attacks; and the reason many of us have not is threefold:

2. Many of those of us who are aware are silent.

This category is aware of the fact that anti-Jewish sentiment exists in academia and with some of the most popular thought leaders today, and are unwilling speak to it either for fear of standing out, or because they are closet Jew-haters themselves.

3. The mainstream media largely will not report on them unless the attackers are white supremacists.

Because of this, it’s become more incumbent on the smaller independent journalists and concerned citizens in this social media age to shine a light on what is lacking on our cable news networks. More specifically, it is incumbent on black Americans to stand up and denounce the violent Jew-hatred that is eating this country alive. We cannot stand idly by while members of our community demonize Jews on an intellectual level, delegitimize Jews on a religious level, and cause bodily harm to Jews on the streets. We must join our Jewish brothers and sisters in this fight against antisemitism, because we know all too well that if the Mississippi Burning murders of James Chaney, Andrew Goodman, and Michael Schwerner have taught us anything, it’s that antisemitism and anti-black racism are not too far from each other.

In America, the black and Jewish struggles have always been intertwined, and, of the two, the Jewish people seem to be more aware of this than many black Americans. Once upon a time, we fought for each other reciprocally; past articles I’ve written on this site will highlight that. But today, it all seems to be one-sided. It’s time for us as black people to take to the streets for our fellow Jewish communities. It’s time for us to lend our voices to fight Jew-hatred.

When Students for Justice in Palestine leaders like Ayah Ali harass a Holocaust survivor at Benedictine University, and take to social media to approve of a Jewish genocide, black students at Benedictine need to speak out and oppose her actions with vim and vigor. When Imam Ammar Shahin preaches sermons about annihilating Jews, black religious leaders should waste no time standing up to condemn him. And when Farrakhan stands at a podium and perpetuates Jewish conspiracy theories and hateful antisemitic rhetoric, black civil rights leaders and activists everywhere need to make our voices loud and clear in our disdain and disgust.

And when Jews are attacked in Brooklyn, especially when the attackers are from our community, we need to take a public stand in solidarity with our Jewish brothers and sisters. We have had the privilege of having someone stand side-by-side with us in our struggles; struggling with us, marching with us, and even dying with us. Much like BASIC back in 1975, it’s time for black people everywhere to stand up and make it known that we won’t take this or any kind of hatred against our Jewish family. It’s time for us to stand up and return the solidarity.

About the Author
Joshua is the Assistant Director of the Institute for Black Solidarity with Israel (IBSI). He’s a composition graduate of the University of Pacific’s Conservatory of Music. Joshua was formerly IBSI’s Director of Special Events, and planned music performances featuring The Hebrew Project Artists (THP) across the country. Joshua is also a graduate of CUFI’s 2016 Diversity Outreach Mentoring Endeavor (DOME), where he received training in Israel advocacy for diverse audiences. He was chosen to travel to Israel twice; once as part of CUFI’s millennial outreach, Israel Collective, and again as part of a music performance with Victor Styrsky’s Wild Branches & Friends. His other musical endeavors include writing for the Boston Pops, and music directing for other artists.
Related Topics
Related Posts
Comments