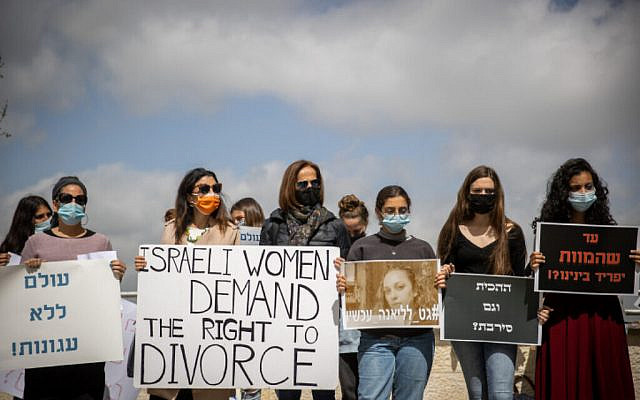 Illustration: Women's rights activists hold a rally outside the Jerusalem Rabbinical Court in protest of their inability to divorce. (Yonatan Sindel/Flash90)

The new policy implemented by Israel’s health ministry, artificial insemination for agunot, should be celebrated by all. The chains Get-refusing husbands place on their wives by not giving them a Jewish divorce (a get) are multifold: women find themselves bound in long legal proceedings in courts and Batei Din, unable to date again and remarry, and also unable to have children. This new policy will cut one of those chains and should be commended by all–especially those concerned most for halacha. It would also be a wise social norm to implement in countries outside Israel, where Batei Din does not have the power of a state, nor do they have the same resources to counter husbands abusing the get process to keep their wives from remarrying.

While Rabbi Moshe Feinstein famously permitted the use of a donor’s sperm to a married woman in a case of infertility in which the husband is infertile, two objections that have been brought up are: A) The child will not know who their true father is and might end up marrying their sibling, B) In case the husband dies, the halacha would require the woman to receive a chalitzah, as is done in every case where a husband dies without children. In the case of a child born from a donor’s sperm, people might assume the infertile husband did indeed have a viable offspring, will exempt his wife from doing chalitzah, and allow her to marry with no chalitzah against Torah law. While Rav Moshe’s ruling has become the mainstream practice across almost the entire spectrum of Orthodox poskim, it is important to note that the situation of an agunah should garner even broader support. In this case of an agunah seeking fertility treatments on the grounds of get refusal, there is no concern that people will assume it is the husband’s child as the couple is already very publicly separated.

As to concerns of a brother ending up marrying their own sister, the prevalence of sibling DNA test kits make for an easy solution to that concern. Siblings’ home test kits sell on Amazon for anywhere between $150-$250 and could be easily administered by those born in such situations before marriage with highly accurate results. In an age of increased fertility technologies, it would be a good idea to do more to normalize and raise awareness about taking this test before marriage.

Another obvious reason to praise and encourage the new policy of allowing agunot to seek IVF treatment is to disincentivize husbands abusing the get process. As the reality of hostile divorces sadly often results in people seeking to inflict pain and revenge on their spouse in the process, husbands knowing that get refusal will not prevent their wives from having children is likely to disincentivize get refusal. It will also address the injustice we see happen all too often in cases of get refusal where husbands depriving their wives of a get, go on to remarry and have children while their wives remain stitch without that ability.

Recently, a woman who was married for just 14 days in 1998 was finally given a get by her refusing husband. While many headlines celebrated the end of this 24-year saga, it is no happy end. Who knows the number of broken dreams she had, the children she might have wanted, and the years of abuse that have gone by. In another recent story, a man who refused his wife a get for 33 years finally gave his wife, a get. While alleviation of their bondage is unquestionably worth celebrating, it is in no way a happy end. Just because a get was given at some point does not mean profound damage is undone. Allowing women to get IVF treatments if they wish, focus on raising a child, and follow more of their dreams during this most difficult period is something we should all be championing.

Yet there is even more of a reason for rabbis and religious Jews to permit and even encourage this new policy of Israel’s health ministry. Until now, women who wanted to have a child might have done so in ways that are not halachically permitted and which might result in the complex and devastating issue of mamzerut (a child born to a married woman having a relationship with a man who is not her husband). The new reform will give a halachically permissible path for those seeking it, to have a child even while lingering in the painful and nerve-wracking period of being an agunah.

Finally, while I do personally believe that even if permitting agunot to have a child with IVF, I respect those who will raise very legitimate halachic and social concerns and objections to this position. Yet, for those with that opinion, harnessing the state’s power to prevent a woman in such a state of pain and limbo from having a child is unforgivable. It takes a great deal of certainty, halachic clarity, and interest to the Jewish people’s future to impose a halachic position in the form of public policy, something that is clearly lacking in this case.