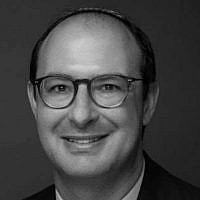 The Blogs
Jeremy Barras
Apply for a Blog
Advertisement
Please note that the posts on The Blogs are contributed by third parties. The opinions, facts and any media content in them are presented solely by the authors, and neither The Times of Israel nor its partners assume any responsibility for them. Please contact us in case of abuse. In case of abuse,
Report this post.

I read Rabbi Brian Strauss’ piece—J Street is honest about what it is, we just have to listen—from December 28 and J Street President Jeremy Ben Ami’s response from January 4.

I recognize Ben Ami’s passionate dismay about the new Israeli government. It reflects sentiments I have heard from countless colleagues, congregants and Israelis who are frustrated as well.

Like him, I don’t agree with everything the Israeli government does.

Like him, I don’t endorse every leader the Israeli public elects.

Challenges between America and Israel are not new. It’s a natural reality of two peoples in two different neighborhoods with two independent democracies.

The U.S.-Israel relationship is essential for Israel’s future, and for America’s. The foundation of the partnership must never be contingent on which party or individual is in office in Washington or Jerusalem.

Every Israeli parent knows that the terrorists firing rockets at schools or placing bombs at bus stops don’t differentiate between Israeli members of Labor or of Likud.

It is incumbent on pro-Israel Americans to ensure that the bonds are always stronger than any personality who inevitably will come and go.

Pro-Israel American leaders have a responsibility to shepherd our community through times of tension between the allies, not exacerbate them.

I am not familiar with any mainstream group, including AIPAC, that says the barometer of whether one is pro-Israel is absolute agreement with the Israeli government.

The barometer of whether one is pro-Israel is in the actions one pursues.

There are countless ways to express and channel displeasure about the government in a pro-Israel context.

Some community leaders have penned or signed letters to Israeli officials while others are organizing fundraising campaigns for Israeli organizations that counter certain policies. Many are bringing in Israeli election experts to educate the community and explore what is happening inside Israel that led a significant number of voters to cast their ballots for far-right parties. And more are recommitting to pro-Israel advocacy wanting to solve disagreements and build an even stronger connection between the two allies.

These are all constructive and affirmative pro-Israel actions that educate, engage and move our community forward.

Regrettably, J Street is taking the opposite approach, channeling frustration with the government toward fomenting division.

J Street is exploiting anger to undermine American government support for Israel, advocating for our elected officials to publicly pressure and punish Israel, and lobbying for the U.S. to use the vital security aid Israel receives as leverage.

Pro-Israel leaders are working through this challenging moment, while J Street is using this moment to celebrate and foster daylight in the U.S.-Israel relationship. That’s not pro-Israel. That’s a recipe for disaster that must be exposed and discarded.

This year we mark 75 years of modern Israeli independence, and 75 years since President Truman recognized the Jewish state. Through the decades there have been great moments and challenging ones, but the relationship is a man-made miracle.

Jewish leaders in America have a responsibility to manage this moment, providing valuable perspective and channeling passions for good. We should seek to emerge from this time with a stronger bond between American Jews and Israel, a deeper understanding of what motivates Israelis and Americans alike, and a renewed commitment to ensuring an even stronger U.S.-Israel relationship for the next 75 years.

About the Author
Rabbi Jeremy Barras is the Senior Rabbi of Temple Beth Am in Miami, FL. He serves as an Executive Board Member of the Greater Miami Jewish Federation Board of Rabbis, a JNF Rabbi for Israel, and as a board member for South Florida Chapter of the AJC. Rabbi Barras is married to the light of his life, Jodi. They have two children, Ella and Ethan.