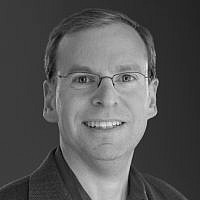 The Blogs
Jeremy Ben-Ami
Apply for a Blog
Advertisement
Please note that the posts on The Blogs are contributed by third parties. The opinions, facts and any media content in them are presented solely by the authors, and neither The Times of Israel nor its partners assume any responsibility for them. Please contact us in case of abuse. In case of abuse,
Report this post. 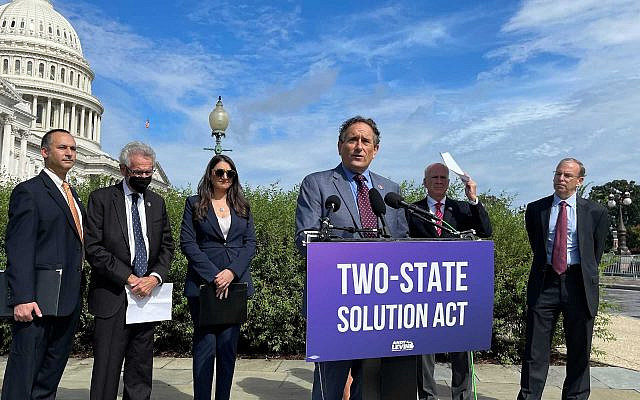 You and I have not met, but I’m writing to offer an opportunity to meet and discuss publicly our differing views of the US-Israel relationship, the future of the State of Israel and the nature of the organization I lead, J Street.

I have noted in recent months an increase in the flow of misinformation regarding J Street. I tend not to engage in point-by-point rebuttals as that only results in the repetition of misleading or incorrect claims.

What I do welcome, however, is the chance to have a thoughtful and open conversation about what it means to be pro-Israel. I just wrote a column in the Forward on this very topic and would welcome your thoughts on it.

For me — as the son of an Israeli who was a leader in the struggle for Israel’s independence in the camp of the current prime minister’s forebears, Ze’ev Jabotinsky and Menahem Begin — being pro-Israel means supporting Israel’s ongoing quest for security, and, as importantly, to be a just country, at peace with its neighbors and acting in a way that accords with the best of Jewish ethics and morals.

J Street lobbies every year for US security assistance to Israel to the tune of $3.8 billion, including support for Iron Dome and other missile defense programs. We support that aid because it assists Israel in remaining safe and secure against the very real external threats it faces. We believe that US security assistance should not be used, however, to promote or support actions – such as settlement expansion, home demolitions and settler violence – that undermine Israel’s security. We do not advocate cutting or conditioning aid to Israel – simply ensuring, as the US does by law for all other countries – that the aid we provide is used as intended, to enhance the recipient’s security.

I have the greatest admiration for an Israeli organization called Commanders for Israel’s Security. This organization connects hundreds of retired Israeli officers, brigadier general level and up, and has produced volumes of information that make one clear point: the ongoing occupation by Israel of territory won in 1967 (in a just war, I would add) threatens the security, democracy, and Jewish character of the State of Israel. Many of them agree with former prime ministers Barak and Olmert that the ever-deepening occupation and the slide toward de facto annexation is the greatest threat facing Israel long-term and that separating into two states between the Jordan River and the Mediterranean Sea is an existential need for Israel, if it hopes to remain secure, Jewish, and democratic in character.

Unfortunately, at the moment, the prospects of achieving a two-state resolution to the conflict with the Palestinians are near zero, and frankly they have been for nearly a decade now since the failure of John Kerry’s efforts in then-president Obama’s second term. The failures of leadership on the Palestinian side combined with a total lack of interest on the Israeli government side mean that the Israeli-Palestinian conflict is settling into a near-permanent “one-state reality,” which raises serious questions about the millions of Palestinians who live under Israeli control without voting rights and under a separate legal system. I’d love to hear your thoughts on what Israel can and should do to prevent the situation from becoming a permanent undemocratic one-state reality.

I’d also love to hear your thoughts on what pro-Israel Americans should do in the face of the new Israeli government that is radically right-wing and whose views are sharply at odds with the American Jewish majority. Among my questions are:

If you answer “no” to any of the questions above, I would of course wholeheartedly agree with you. One thing I wouldn’t do, regardless of your response, is question your “pro-Israel” credentials or your love and support for the state.

I know there are positions J Street takes that you disagree with — but these are issues that we should debate as supporters of Israel who disagree on important issues. Surely we can have these policy disagreements without questioning each other’s intentions.

As a pro-Israel, pro-peace, pro-democracy organization primarily made up of American Jews, J Street believes that it is our imperative to discuss these issues with our US elected officials, and to advocate for policies and actions that can help defend Israeli democracy and security, while also advancing our own interests and values as Americans.

We believe that if a company is willing to sell its products in Israel (say, ice cream) but is not willing to sell them in settlements in occupied territory – that decision does not align one with the BDS movement which boycotts Israel itself. We also believe that the First Amendment protects the free speech rights of boycotters – even those we disagree with – and we don’t advocate criminalizing supporters of the BDS movement with whom we disagree.

We believe that if a journalist who is an American citizen appears to have been killed by another country’s military, it is completely appropriate for the US to pursue an independent investigation into the circumstances surrounding the killing. That is what many members of Congress and senators have called for, regarding the apparent killing of Shireen Abu-Akleh by the Israeli military. J Street agrees that there should be an independent investigation. Don’t you?

The fact that Iran is now advancing its nuclear program is very much a crisis and alarming for Israel’s security interest. While the Iran nuclear agreement was in place, Iran’s nuclear program was permanently restrained. Only when Donald Trump broke the agreement — with AIPAC’s encouragement — did Iran’s program again begin racing forward. J Street supported the JCPOA – along with a 70-percent supermajority of Jewish Americans. Did you?

J Street believes US support for Israel is vital and should be rooted in shared interests and values. We support candidates for federal office who align with us on that and who also share our belief in the American democratic system. J Street refuses to endorse or fund any candidate who voted to overturn the 2020 election or has supported Donald Trump’s lies about election fraud. AIPAC, by contrast, endorsed over 100 election-deniers and insurrection-enablers in 2022. They said nothing matters in winning their support other than supporting Israel. We think that’s a highly misguided approach. What do you think?

The overwhelming majority of Jewish Americans agree with the positions that J Street takes. But too often those who disagree with us simply attack our pro-Israel bona fides rather than addressing the core issues at stake.

Based on your article outlining your issues with J Street, I’m guessing we don’t agree on a lot of the issues I’ve raised. As you are a respected rabbi leading an important community, I’d welcome the chance to discuss our disagreements publicly and civilly. I think that would be healthy for our community as a whole. AIPAC itself has never once in 15 years agreed to appear publicly to discuss these issues with J Street. I think our community would benefit greatly if we did. Please let me know if you’d be open to a dialogue about what it really means to be pro-Israel.

With warm wishes to you and your community for 2023,