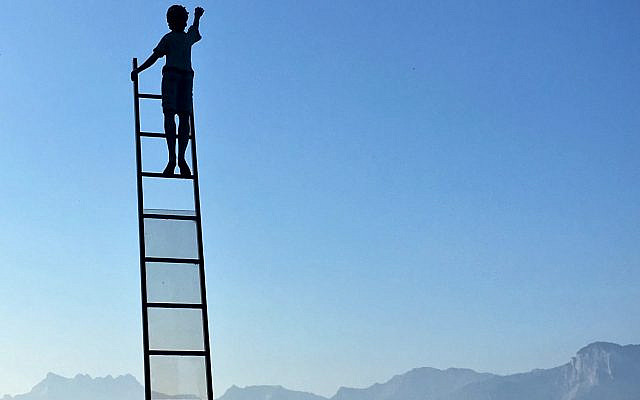 Photo by Armand Khoury on Unsplash

Jacob’s ladder is one of the most renowned images in Torah. It originates in this week’s parsha, Vayeitzei. Sleeping on the mountain that would later house the Temple, Jacob dreams of a ladder that rests on the ground and climbs into the heavens with angels ascending and descending (Genesis 28:12). The Zohar interprets the dream to be a reference to the service of prayer which connects the heavens and the earth and enables us to climb out of our mundane existence to experience deeper and more ethereal levels of reality. The Midrash (Megaleh Amukot 1) specifies that Jacob’s ladder had four rungs, and that these correspond to the four sections of the morning prayer.

The first rung of the ladder of prayer is “karbonos/sacrifices.” In this first of the four segments of the morning service, we recite the chapters from scripture that describe the sacrifices in the Temple, and we read sections from the Talmud that discuss the laws of how and where the offerings were processed. In so doing, we “render [for] bulls [the offering of] our lips” (Hoshea 14:3), substituting our words for our livestock. The animals offered in the Temple were intended to be a material manifestation of one’s animal soul. The inner meaning of the sacrifices was the consumption of the physical flesh and the eradication of the animal casing that conceals the spirit within.

Once we have “burned away” the material crust that conceals our inner being, we can climb to the next rung of the ladder, “Pesukei D’zimra/Verses of Praise,” in which we begin to focus on the Godliness that exists beneath the surface. The word “Zimra” derives from the root “zemer,” which literally means “song,” and several parts of this second section of the prayer service are traditionally sung aloud. A chassidic proverb teaches that while words are the pen of the mind, song is the quill of the soul. This section of prayer gives voice to the soul so that it can express and assert itself. The root “zemer” also means “to prune” or cut. As we recite these verses of song, we are also continuing to cut through the external coverings that remain even after we have offered our animal in the service of “karbonos/sacrifices.” Like an onion, there are layers upon layers that veil our inner essence, and as quickly and diligently as we prune them away, they grow back and enwrap us once again. Therefore, our focus on this second rung is two-fold and is expressed in the dual meaning of its name pesukei d’zimra: we are cutting away the external as we sing to give expression to the internal.

Our goal in the first section, “karbonos/sacrifices,” was to clear away the external barriers that block our entry inward. Our intention on this second rung of the ladder is to delve far beneath the surface and to plumb our depths in search of the Godliness that has been buried and forgotten through our engagement in the material world. As we do so, we are ready to climb to the third rung of the ladder where we will fully experience the ecstatic epiphany of the recitation of the Shema.

The third section of prayer is the Shema, which expresses the central tenet of the Torah, the unequivocal declaration of God’s absolute unity. The awareness of this ultimate reality is the goal of our daily meditation, coupled with the love and awe that it inspires. Through the recitation of the Shema, our job is not merely to transcend the world, but to then transform it by introducing this radical knowledge of God’s oneness into our surroundings. This is expressed within the recitation of the Shema itself. The first verse of the Shema – Hear O Israel, the Lord our G-d, the Lord is One – is followed by the verse “v’havta es A-donai E-lohecha /And you shall love the Lord your God….” (Deuteronomy 6:5). Love is not simply an emotion, but also a desire. It is not merely a feeling of something, but it is a longing for something. As the Alter Rebbe points out (Likkutei Torah, Parshas Naso, Koh T’varchu Bnei Yisrael) the word “אַהֲבָה/ahava/love” is etymologically related to the word “תאב/taev/desire.” When we love another, we are not only united with her/him, but we also long to do for her/him, or to give to her/him. As such, the result of the stunning revelation of God’s oneness is not only adoration and awe, but also an intense yearning to give to Him, to respond with some reciprocity to His incredible generosity to us. What is it that we can possibly give to the infinite God? The spreading of the awareness of His presence throughout the darkness of His creation.

How can we do so? By climbing to the fourth rung of the ladder, the “Amida,” the silent standing prayer. This was established in order to memorialize the task of illumination that was intended to be the outcome and summit of our daily prayer. How does the “Amida” fulfill this function? The silent standing prayer is a series of nineteen (originally eighteen) blessings, each of which concludes with the phrase “Baruch Atta A-donai/blessed are You God,” followed by a phrase that summarizes the content of that particular blessing. On a simple level, these blessings can be understood as entreaties, ranging from requests for wisdom, to forgiveness, to redemption, to health, prosperity, etc. However, the Alter Rebbe explains the more mystic and essential “kavana/intentionality” that underlies the entire “Amida” prayer: “The main intention in prayer is that we request that the infinite light of God that is above the creation should be brought down and drawn down below into the aspect of the creation” (Likkutei Torah, Parshas Balak, Lo hibit).

This intention of drawing Godliness down into the world is the inner meaning of the word “Baruch/Blessed.” The root of “Baruch,” ב-ר-ך, means to “draw down,” as in the word “מַבְרִיך/mavrich.” This term is utilized in the Talmud in the phrase “hamavrich es hagefen,” meaning to “draw down a vine” in order to plant it in the ground so that it grows a new plant (Sotah 43a). The root is also found in the word “בְּרֵיכׇה”, which means “pool,” a place where water has descended and settled. When we say “Baruch Atta A-donai/Blessed are You God,” we are thus intending that God should be brought down and revealed within the depths of this world. More specifically, the kabbalists teach that “Atta/You” refers to a level of God that is so high that it is beyond any name, and “A-donai” is the name of God that symbolizes His emergence into this realm. Therefore, “Baruch Atta A-donai” is a formula in which we are verbalizing our intention to “baruch/bring down” the transcendent level of “Atta” into the level of “A-donai” which connects Godliness to the creation.

This said, we can now appreciate the “Amida” as a series of repetitions of this phrase “Baruch Atta A-donai.” Each of the nineteen blessings which are concluded by this phrase represents the “bringing down” or revealing of Godliness through various aspects of our existence. After we have reached the awareness of God’s unity in the Shema, we now pronounce these nineteen blessings in order to take this “lofty” wisdom “down” into the “lowest” realms. With this, we can understand why the “Amida” is considered a fourth rung on the ladder, even “higher” than the third rung of the Shema. If we are now conveying what we gathered on the third rung “downward,” then why is this described as another ascent in level rather than a descent or return? The answer is because the height of our service is not elevation but dissemination. We are paradoxically most high when we descend most low. We are closest to God when we bring Him into the world in which He seems to be absent. Therefore, although the Amida is a process of bringing down, it is a tremendous elevation and the pinnacle of our prayer service.

This idea of elevation through descent is one of the hallmarks of Torah and one of the most precious insights that distinguishes it from other forms of spiritual wisdom. While other wisdom systems have taught that the pursuit of Godliness and personal development will lead one to transcend the material and retreat from the exigencies of the physical world, Torah teaches that the apex of self-actualization is complete involvement with the world. While other disciplines offer mountain-top temples and retreat centers that remove one from the daily grind in order to encounter the divine, Torah tells us that Godliness is found nowhere more than where you are. While priests, monks, and leaders of various spiritual systems practice celibacy, asceticism, and various forms of abstinence, Torah ordains that all, including the most holy leaders and teachers, must seek marriage, intimacy, procreation, and full engagement in bodily affairs.

Gluttony is surely forbidden, and numerous Torah practices are intended to train us to control our bodily drives and passions rather than allowing them to control us. But the Torah life is not one of denial and divorcement from the physical. On the contrary, every day is a process of removal and then return. The mystics refer to this as “ratzo v’shov/running and returning.” Our soul is like a flame that flickers upward, constantly reaching toward the heavens, but holding fast to the wick and remaining below to shine its light in the darkness of this world. Our prayer service represents this flickering and this “running and returning.” We pray three times daily to temporarily remove ourselves from the world and reconnect to our core, but we end each of those services with the “Amida,” reciting “Baruch Atta A-donai” nineteen times in order to come back into the world and bring with us the Godliness that we have encountered in the heights and depths of our soul.

It is therefore particularly relevant that in Jacob’s dream, angels were both ascending and descending the ladder. The goal of Torah prayer is not simply to alter our consciousness or elevate us to an experience of spiritual bliss. Rather, it offers us enlightenment and rapture specifically in order for us to then change and fix the world. We climb the ladder not simply in order to rise above the creation, but rather in order to intermittently reconnect with the divine so that we can then descend and reveal God within the darkness and confinement of the physical realm.