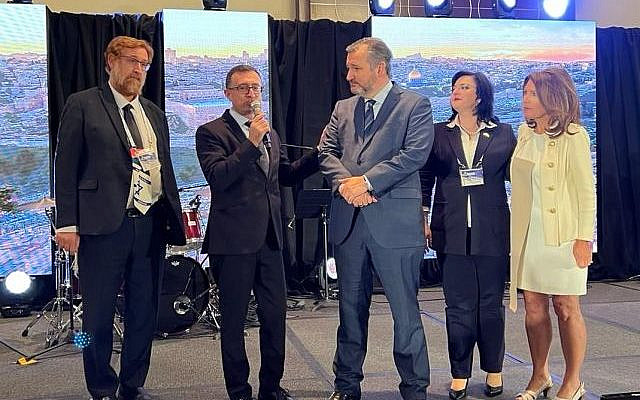 More than 800 Christians and Jews visiting from Israel, throughout Texas and across America attended the more than 3 ½-hour program, which included numerous prayers, readings from scripture and spiritual music representatives of both faiths, reported All Israel News.

“When Christians and Jews gather to pray together, history is made,” said Albert Veksler, JBP director and administrator of the event.

The Jerusalem Prayer Breakfast is a global prayer movement that brings together government leaders and key influencers worldwide in prayer for the nation of Israel and its people. Initiated and chaired by former Knesset Member Robert Ilatov and co-chaired by former US Congresswoman Michele Bachmann, it has spread to more than a dozen strategic cities of the world since the inaugural breakfast held in Jerusalem in 2017.

“It is important at this time that we stand for what is right, what is just and what is true,” said US Congressman Michael Cloud, “There is no moral equivalency when it comes to Israel – a nation that could be destroyed by its enemies in one day. That is why our government stands in support of Israel.”

Israeli Minister of Religious Services Matan Kahana shared stories of truth, justice and friendship in times of adversity he learned from his grandfather.

“Nations that share values of freedom and family choose light against the darkness, love against hate, life against a culture of death,” he said. “It is always possible to choose an alternative in the face of challenge. Through tears and terror, our grandfathers were victorious in the past, and their children and grandchildren will be victorious in the future to overcome today’s challenges.”

Knesset Member Tatiana Mazarsky, chair of the JPB Caucus in Israel, noted that “Prayer brings fresh miracles, and the Jerusalem Prayer Breakfast changes realities. As we appeal to our Heavenly Father, the prayers of each of us and together will change attitudes in Israel and the United States.”

Mazarsky closed her prayer citing the call of Abram in Genesis 12:3, whom God promised to make a great nation: “I will bless those who bless you and curse those who curse you; and all the peoples of the world will be blessed through you.”

Bachmann offered a prayer-statement for the nation of Israel that lasted more than 20 minutes. “We say thank you to the Jewish people with whom You chose to make a covenant and gave Your law, prophets, glory, Kingdom and blessing,” she said. “There is no city in Your Word for which we are commanded to pray than Jerusalem; and Your people are connected to Your land forever.”

Texas Governor Greg Abbott recalled the terror attack that took place in his state in January. “We saw the power of prayer in Colleyville, TX, earlier this year, when a man took hostages at a synagogue – including the rabbi – all of whom were safely released,” he said.

Abbott also noted the close partnership of his state and Israel, reminding that “We recently passed a law prohibiting Texas companies from doing business with companies that boycott Israel.”

“Thank you for answering the call to pray for the city of Jerusalem and the nation of Israel, in which freedom of religion for all people will always be protected,” he said. “The United States is our greatest ally, and we thank you for your prayers and friendship from Jerusalem, the City of Peace.”

Senator Ted Cruz, the keynote speaker, said it was a privilege to join as Christians and Jews together prayed for and honored Israel and the Jewish people. He was introduced as the leading US politician in defense of Israel, and explained that some of the policies of the previous US administration – such as moving the US Embassy to “the once and eternal capital” of Jerusalem – were considered controversial but produced successful results.

Cruz noted that both the United States and Israel are nations with interesting histories and an intertwined battle, known for providing hope amid suffering by welcoming people fleeing tyranny.

The JPB continued throughout the day with a Leadership Luncheon, followed by breakout sessions throughout the afternoon, including an Inside Brief and Panel Discussion with Israel government leaders and workshops on building champions for Israel among the next generation and the Texas-Israel trade alliance, to name a few.

The day concluded with a Shabbat dinner for all participants. For more information on the JPB movement or archived livestream video of the event, visit Jerusalem Prayer Breakfast.