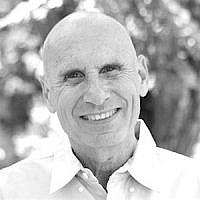 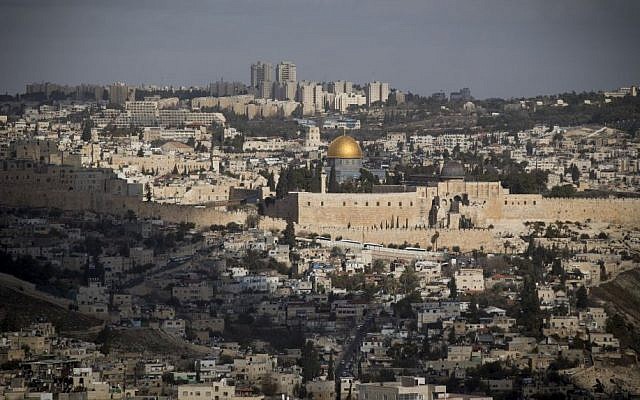 View of Jerusalem showing the Old City in the foreground against new parts of the city in the background, January 9, 2017. (Yonatan Sindel/Flash90)

Those who seek to divide Jerusalem often point out the lack of affinity Israelis feel toward the eastern areas of the capital.

Palestinian neighborhoods of east Jerusalem hold no significance for the Jewish people, their argument states. Proponents of this line can often be heard asking: ‘When was the last time you were in Beit Hanina, or Tzur Baher? Were Jews praying for 2,000 years to return to Abu Dis?’

The short answer to this question is that Jews were not praying to return to Rehavya, in modern, West Jerusalem, either. The fact is that Jerusalem has long ceased being only a divine concept. Today, it is a bustling, metropolitan area, with all of the expected, attendant, daily realities. Jerusalem today is a physical reality, retaining its spiritual character, centered in the holy sites.

Asking one when the last time they were in east Jerusalem areas is, therefore, a misleading attempt to promote the idea that Israel should divide its capital.

Israel’s objectives regarding Jerusalem should focus on retaining control of both its spiritual dimensions – the Old City and the Temple Mount – and its development as a counter-weight metropolis to Tel Aviv, which is Israel’s global-oriented city.

This can only be achieved by keeping Jerusalem united.

Great states should be tales of two cities

States often require two centers of gravity: A ‘port city’ — which is not necessarily a literal port city, but rather, to all intents and purposes, a cosmopolitan center that is open to the world, (and which can serve as a national gateway), and a local capital. The ‘port city’ is usually hooked into a global network. For example, Tel Aviv is a financial hub, part of the global, financial network, while the capital forms the center of a national-local network.

There are many examples of this: New York and Washington, Barcelona and Madrid, Istanbul and Ankara, or Shanghai and Beijing.

Two thousand years ago, in the kingdom of Judea, King Herod built up Caesarea as a port city and linked it to the Mediterranean trading network. Caesarea was a trading hub, part of the sea network that was linked to Alexandria in Egypt, Tyre and Sidon (in modern-day Lebanon), and Athens.

Herod also built up Jerusalem and the Second temple, understanding that his kingdom needed two poles to act as counter-weights to one another, in a complimentary manner.

The French philosopher Gilles Deleuze has written of this healthy tension, between port cities and capitals.

In modern Israel, Jerusalem and Tel Aviv can generate this kind of dynamic too. In order for that to happen, Jerusalem must not be relegated to ‘a subjugate of Tel Aviv.’

It should instead generate its own ‘center of gravity,’ so to speak, and constitute a metropolis in its own right. To do so, Jerusalem must have its own ‘network’ of communities that are affiliated with it. This is what defines a metropolis and fosters a local identity.

Creating a tension between a local metropolis – Jerusalem – and a universal one – Tel Aviv, will enable each to identify itself in regards to the other.

Today, Jerusalem is a true metropolitan area. Most people in the greater Jerusalem area work in the capital, not in Tel Aviv. It is developing a hi-tech sector, and the city must also hold on to its secular population, to be able to maintain a ‘dialogue’ with Tel Aviv.

To retain its current status, greater Jerusalem must extend up to the Dead Sea to the east, to Gush Etzion and Kiryat Arba to the south, and to Bet El and Eli to the North. Without these extensions, Jerusalem will shrivel up.

A model of secure co-existence

A second, no less important, reason that Israel must not divide Jerusalem is that of security.

Of strategic importance is Israel’s need to maintain a wide corridor through which it can inject military forces into Judea and Samaria.

Control over a united Jerusalem provides just this kind of corridor, ensuring Israel’s ability to respond to threats immediately.

Without the strategic depth afforded by Israeli control over a united, greater Jerusalem, Israel will lose its ability to defend its coastal cities.

The Mediterranean costal plain is the beating heart of Israel, yet it would be exposed to enemy artillery, rockets, and surveillance in the event of Jerusalem becoming divided.

Seventy percent of Israel’s Jewish population, most of its strategic assets (like power stations, the international airport, ports, etc), the financial and manufacturing centers, are located in the coastal plain. All of these lay beneath the hills of Judea and Samaria, areas that are accessed by moving forces through greater Jerusalem.

The Clinton peace plan of 2000 (which was rejected by the Palestinians), to divide Jerusalem into Jewish and Palestinian neighborhoods, is unrealistic.

It would cause Israel’s loss of control of the area, and render it unable to deal with developing threats in Judea and Samaria.

The idea of retreating behind a border fence is utterly impractical when it comes to Jerusalem. A fence will not prevent roadside border bombs or projectile attacks if Israel is not present on both sides of it.

Could a border barrier really go up in Jerusalem? Could Jerusalem be peppered with endless border gates? The idea is unfeasible.

In fact, Palestinians in Jerusalem would like to live in coexistence with Israelis. The potential for coexistence between Jews and Arabs in Jerusalem is great, and if realized, could form the basis for sending a more hopeful message to the rest of the world.

For all of these reasons, on Jerusalem Day, Israel will do well to remember that its capital is indivisible.

About the Author
Gershon HaCohen (Res.) concluded his service in the IDF at the rank of Major-General. His military experience includes commanding troops on the Egyptian and Syrian fronts, commanding an IDF corps and serving as commander of the IDF military college. He is an advisor to Our Soldiers Speak (www.oursoldiersspeak.org).
Related Topics
Related Posts
Comments