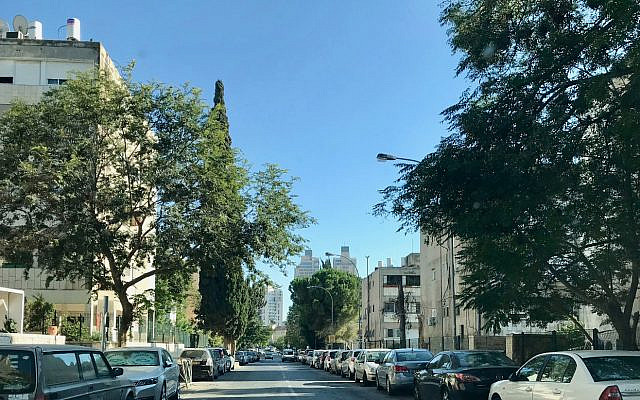 A leafy street in the Jerusalem neighborhood of Arnona, before the Jerusalem municipality and local real estate developers build towers, in order to create more apartment units. (Jessica Steinberg/ The Times of Israel)

Under the respectful heading “urban renewal” — destroy/build — tens of thousands of new apartments, most of them in soulless towers, are already on their way to construction, thanks to Jerusalem Mayor Moshe Lion. These are the projects that will define his (first?) tenure as mayor.

Some 35,000 dwelling units are either under construction, in the building permit stage, approved, or on their way to approval. Practically every gentrified apartment block (“shikun”) in Jerusalem is to be destroyed, and replaced with mainly residential towers, many of them 30 stories high. Just one tiny problem. Everything is being fast-tracked on a piecemeal basis, without any comprehensive planning policy in hand.

What is needed urgently is an up-to-date master plan that includes a three-dimensional building appendix showing clearly the proposed situation. Instead, we have the unremitting pressures of entrepreneurs who dominate the decision-making process through their connections and money for their own private interests. Speculative building is extremely dynamic. No one, including Jerusalem’s mayor, has the slightest idea where all of this is leading.

As Jerusalem’s chief executive officer, Mayor Lion directs the administrative structure of the municipality with the authority to appoint or remove department heads.

Lion’s “city engineer” (a misnomer remnant of the British Mandate period) and main professional adviser on planning and building is Yoel Even, a civil engineer and a former project manager, who lacks even the most minimal qualifications to establish city planning policy, and absolutely no training in architecture and urban design. In selecting Even for this role, Lion made it clear that his sole concern is maximizing the number of those apartments being built, without the least regard for a neighborhood’s character, a building site’s capacity, a building’s physical and natural environmental context, or it human scale — let alone Jerusalem’s spiritual importance.

All we ever hear from Lion are cold statistics. Never a word on design quality. This is not to say that Mayor Lion is malevolently or even consciously trying to make Jerusalem ugly. Far more likely is that trained as an economist and accountant, he is simply unaware of the consequences of his acts.

But on whatever basis the mayor has made his choice of department heads, most especially his “city engineer,” whose department is responsible for approving these plans, Lion’s choices have already had a negative impact on the design of Jerusalem. How else can we explain the monstrous destroy/build projects like the ones for Kiryat Menachem, Katamon, and Kiryat Hayovel? These projects have little to do with economic urban densification, and much more to do with the insatiable appetite for the short-term profit of real-estate developers. For sale: Jerusalem.

And may we ask on what basis architects are being chosen to design these large important projects? Does Lion understand that towers are not only costly to build but also extremely costly to maintain? Has he considered even for a moment what it means to bring up children in these towers?

Is anyone in the Jerusalem municipality today is capable of forming a three-dimensional, humane, and thoughtful planning policy for the city? This all-important matter must be addressed by our mayor urgently. Continuing to build massively without such a plan is certain to prove extremely destructive to Jerusalem’s historic character, the city Lion claims to love.

About the Author
Gerard Heumann is an architect and town planner in Jerusalem.
Related Topics
Related Posts
Comments
Advertisement