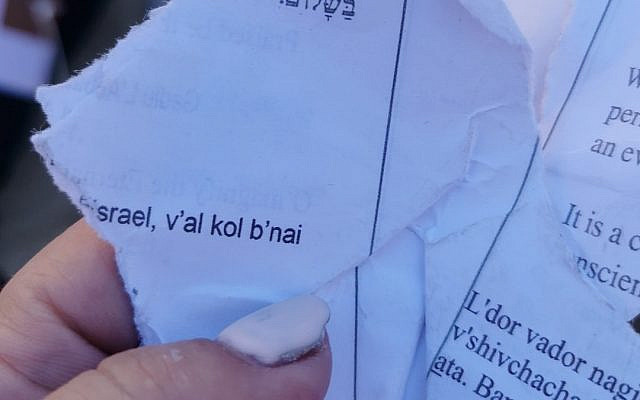 Pages torn from a siddur by young Orthodox men at the egalitarian section of the Western Wall on June 30, 2022. (Masorti Movement)--Published in Times of Israel, July 5, 2022

Of the many synagogue trips I have led to Israel over the years, many of them included my officiating at bar or bat mitzvah ceremonies at the Kotel, the same holy venue where last week’s ugly incidents occurred.

Judah Ari Gross’ article, “After bar mitzvah overrun by zealots, parents lament: ‘We saw Israel at its lowest’”—was enough to turn my stomach. Seeing the accompanying photos of young Haredi youth disrupting three b’nai mitzvah worship services at one of the holiest sites to the Jewish people, was a jolt to both my Jewish pride and to the love I have for Israel. The photo of an ultra-Orthodox young man reportedly tearing a page out of one of the prayer books used by the worshipers, and then wiping his nose with it, is reprehensible.

It is incidents like what happened at the Egalitarian Kotel last week that threaten to tear apart an already fragile support for Israel among Diaspora Jews. And God knows, that with the existential threats to Israel from Iran and its proxies in Gaza and Lebanon, the last thing Israel needs, is to have Jews pitted against Jews. We have seen this movie before. Enough is enough! It is time for Israel’s leaders to take action and stand united against hate!

Israel’s Ministry of Diaspora Affairs is tasked with creating bridges between world Jewry and the State of Israel. The website of the ministry states clearly: “The Israeli government sees itself as being responsible for all Jews worldwide, whether they live in Israel or the Diaspora.” I would not be surprised if the source for that statement was inspired by the talmudic saying, “Kol Yisrael Arevim Zeh Bazeh—All Jews are responsible for each other.” (Shavuot 39a). Yet, since the events of last Thursday, no official statement has come from the ministry or from any other government official, condemning the Haredi community which has, for years, attacked Reform and Conservative Jews both in Israel and in the Diaspora. Yesterday, Prime Minister Yair Lapid responded to a reporter’s question about the incident, saying: “I am against all violence at the Western Wall against people who want to pray as their faith allows them. This cannot continue.”

Why didn’t he condemn the actions? Why did he wait almost a week to comment?  The answer is crystal clear. He doesn’t want to offend the Haredi community. To Lapid and most of his colleagues, Reform and Conservative Jews are expendable.

The lack of condemnation and not holding the leaders of the Haredi community responsible for its youthful adherents’ appalling behavior, rests squarely on the shoulders of Israel’s elected officials. It is time for those officials to speak loudly and take action to ensure that ALL Jews, are free to worship without harassment, without disruption and to hold accountable all who would dare to repeat last week’s confrontations.

Shame on every Israeli politician, who through indifference and inaction, has enabled the Haredi community to spew hatred toward fellow Jews.

Those three kids who celebrated their b’nai mitzvah will never ever forget how their coming-of-age Jewish ceremony was marred and violated by Jewish hoodlums. Shame on every Israeli politician, who through indifference and inaction, has enabled the Haredi community to spew hatred toward fellow Jews.

Every Shabbat, when we recite the Prayer for the State of Israel, we ask God to:

“Shield Israel with Your lovingkindness, envelop it in Your peace, and bestow Your light and truth upon its leaders, ministers, and advisors, and grace them with Your good counsel.”

Light and truth. Good counsel. As we enter these months of Tammuz and Av, reminding us of those dark days of the past, I imagine God is looking down upon Israel’s leaders, imploring them to do the right thing and end the Sinat Chinam, transforming our brokenness and darkness into light. Failure of Israel’s elected officials to take the bold steps necessary to call out those who denigrate fellow Jews, will result in another destruction.

Only this time, it will not be the destruction of a Temple, but rather the demise of the Jewish people.

About the Author
Reuven Taff has spent 50 years serving Jewish communities. For 25 years, he was the rabbi and spiritual leader of Mosaic Law Congregation in Sacramento, California, now serving as Rabbi Emeritus. As a Hazzan and Jewish Educator, he served as Cantor and Educational Director at Beth El Congregation in Phoenix, Arizona and Headmaster of Gesher Jewish Day School of Northern Virginia. In addition to his blog on Times of Israel, his opinion pieces have been published in The Sacramento Bee, Sacramento News and Review, The Wall Street Journal, USA Today, The Algemeiner, The Jerusalem Post, The Jewish Forward and other publications. He can be contacted at rabbitaff@mosaiclaw.org.
Related Topics
Related Posts