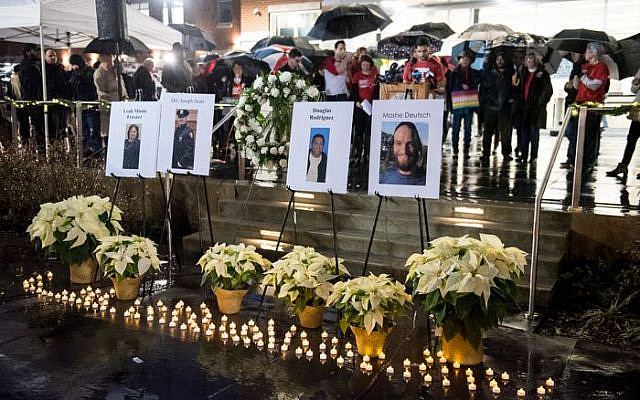 On December 10th, 2019 in Jersey City, NJ, two assailants shot up a kosher deli and cemetery, killing 6 people. Reports came out soon after that the two shooters are members of the Black Hebrew Israelites, have been making antisemitic posts on social media, and had a pipe bomb found in their truck. If that isn’t terrible enough, footage was captured of people standing in the aftermath of the attack blaming the Jews, and claiming they deserved what happened to them. A woman was caught on tape yelling at a Jewish man at the scene of the crime telling him the following:

“My children are stuck at school because of Jew shenanigans. They are the problem. Because if they ain’t come to Jersey City this s*** would never go on. Take that s*** somewhere else. I blame the Jews,” the woman continued. “We never had a shooting like this until they came. If this had been the other way around, they’d be killing us, and everybody who’s standing right here knows that. Four of yours are dead, right?” the woman asked the Jewish activist, who replied that he doesn’t know. “It they were dead, that’s great,” she said.

Another resident was heard saying, “Get them damn Jews the f**k out of here. Get these f*****g Jews. Get the Jews out of Jersey City.” You can watch the video here.

On Wednesday December 4, just a week before and 9 miles away from the shooting, someone posted on the NAACP Passaic, N.J. Branch a misleading article about US aid to Israel, and a caption which reads, “The Very Bullshit We Are Talking About Blacks Dying So Jews Can Live.” In the comments section of the post, the person in question continues to demonize Jews and Israel, and praise anti-Semitic statements by Louis Farrakhan.

Despite several tags of the NAACP national Facebook page, no action has been taken. As director of IBSI, I reached out to the NAACP national office via email, and received a speedy response saying their legal team reached out to the New Jersey branch informing them to cease. In spite of these efforts, the post remains on the page. This post has now been up for 2 weeks and nothing has been done. Public statements of anti-Semitism by the nation’s oldest civil rights organization is beyond disturbing, especially in light of the shooting and killing of Jews in Jersey City by at least one former member of the Black Hebrew Israelites.

I don’t know for sure who is behind the posts from the NAACP Passaic, N.J. Branch page, but what I have observed is that the profile picture the page currently has is one of a former NAACP leader who was fired in August of this year for his criminal record and antisemitic statements. His name is Jeffrey Dye. Whether or not Dye is behind these posts is not certain, but given that the page’s profile picture still has him in it, and his own personal Facebook page is teeming with the same Jew-hating rhetoric raises an eyebrow at best.

What has happened in New Jersey and New York continues to highlight a massive Jew-hating problem within the black community; whether they be members of the Nation of Islam, or this new generation of the Black Hebrew Israelites, there is a deep-seated hatred that has spread throughout our community like a cancer. And like every hatred, whether white supremacy, black supremacy, the KGB, Nazi’s, Jew-hating Christians, or any other kind of racial superiority, the people who eventually are targeted the most are Jews. Surprisingly or not, all of these demonic hateful groups peddle the same antisemitic tropes and resort to violence.

The fact that it has been 2 weeks since the nasty post was made, and no action has been made is very concerning; especially in this climate of rising antisemitism. On the day this piece was submitted, a muslim woman attacked Jews on an New York City subway. Whoever this person is causing this trouble on the NAACP New Jersey Branch’s page, I am hopeful the NAACP will handle this as swiftly as possible and whoever is behind these posts will be cut off completely as their views should not represent an organization that is not only for colored people, but was founded and  initially funded by both blacks and Jews.

Join the fight with us against Jew-hatred of every kind and follow us on Facebook at IBSI – Institute for Black Solidarity with Israel.

About the Author
Joshua is the Director of the Institute for Black Solidarity with Israel (IBSI) where he plans events and speaks. He’s a composition graduate of the University of Pacific’s Conservatory of Music. Joshua was formerly IBSI’s Director of Special Events, and planned music performances featuring The Hebrew Project Artists (THP) across the country. Joshua is also a graduate of CUFI’s 2016 Diversity Outreach Mentoring Endeavor (DOME), where he received training in Israel advocacy for diverse audiences. He was chosen to travel to Israel twice; once as part of CUFI’s millennial outreach, Israel Collective, and again as part of a music performance with Victor Styrsky’s Wild Branches & Friends. His other musical endeavors include writing for the Boston Pops, and music directing for other artists. Joshua is also a featured author on a collaborative book called 'Israelophobia and the West: The Hijacking of Civil Discourse on Israel and How to Rescue It' by Jerusalem Center for Public Affairs official, Dan Diker.
Related Topics
Related Posts
Comments
Advertisement