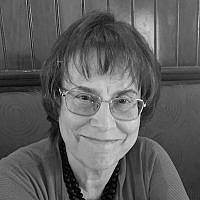 The Blogs
Esther Finder
Apply for a Blog
Please note that the posts on The Blogs are contributed by third parties. The opinions, facts and any media content in them are presented solely by the authors, and neither The Times of Israel nor its partners assume any responsibility for them. Please contact us in case of abuse. In case of abuse,
Report this post.

Were Jewish Children in Boarding Schools During the Holocaust?

That was one of the questions we were asked during a Holocaust program with an agency of the US Federal government.

The question, read from submissions from the 500+ person online audience, was repeated.

I could see that my fellow panelist, a child survivor who had been hidden in France, wanted me to take the question.  Where to begin?  This struck me as such an odd question, I was momentarily speechless.

As possible answers began forming in my head, I felt compelled to treat this as a question asked in ignorance of Holocaust history, not in malice.  Maybe the person asking really did not understand how offensive the question was?  I decided to err on the side of caution.

I began my response by saying Jewish children were kicked out of public schools and forced to attend Jewish schools.  When it became dangerous for the children because they were easy targets for roundups, parents would not send them to school at all.  But education was so important that schools were set up even in ghettos, sometimes on pain of death.  If caught both the educators and the students could be shot on the spot.

Boarding schools?  Perhaps the person misspoke and meant to say orphanages?  Sometimes Jewish children were hidden in orphanages or convents and attended classes, but they did so as “Christians”, not as Jews.  There were harsh penalties for harboring Jews during the Holocaust.  My co-panelist attended school in a village in France and everyone knew she was a hidden Jew, yet nobody betrayed her or her rescuers.  She attended as a Christian and the pretense was maintained.

One and a half million Jewish children were murdered in the Holocaust.  Should I have told the audience about how they were killed?  Thrown into gas chambers or burned alive?  Starved to death?  Tossed out of buildings or slammed into walls?  Should I have mentioned that they died in their parents’ arms during mass shootings?  How much more should I have said?

We had just heard from a survivor who talked about the desperation of her parents who sent her into the arms of strangers to save her.  I mentioned the children who were sent to England and America.  Unaccompanied minors under age 17 went into the unknown sometimes finding safety, other times finding abuse.  Maybe I should have told the story of the Jewish child born in a ghetto and smuggled out, in a drugged state, by her parents in a coffin?  The level of fear these families experienced is unfathomable.

Later in the program we were asked about Holocaust deniers, and I shared an answer I once heard given by Holocaust survivor (and friend of the family) Gerda Weissmann Klein: the German government has never denied it.  I added the Nazis themselves provided the proof of their crimes: photos, films, documents and artifacts that remain.  If in doubt, go visit Auschwitz or Majdanek.

I have been reeling ever since hearing the question.  Boarding school?  This was so far distant from my family’s experience.  I had two young first cousins before World War II, and both were killed by the Nazis.

Did the person asking the question think Jews were rich and could afford boarding schools and that saved their children?  If so, Holocaust deniers and revisionists have been busy, and educators have a lot of work to do.