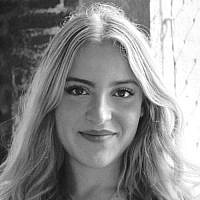 The Blogs
Phoenix Berman
Apply for a Blog
Advertisement
Please note that the posts on The Blogs are contributed by third parties. The opinions, facts and any media content in them are presented solely by the authors, and neither The Times of Israel nor its partners assume any responsibility for them. Please contact us in case of abuse. In case of abuse,
Report this post.

This past October, I had the privilege of hosting Manashe Khaimov, a representative of the Bukharian Jewish community, to speak at the University of Florida (UF) Hillel for Israel Week. The purpose of UF Hillel’s Israel Week was to showcase Jewish indigeneity, the diversity of the Zionist movement, and highlight communities within the Jewish diaspora.

Manashe presented on the often overlooked Jews of Central Asia, also known as Bukharian Jews. A community with a unique culture, complex history, and an unwavering connection to the land of Israel.

Jews arrived in Central Asia after the destruction of the First Temple. They were pushed out of Israel, their indigenous homeland, into the greater Middle East, North Africa, the Caucasus mountains, and Central Asia by the Babylonian, Assyrian, and Persian Empires. These communities are often Mizrahim, roughly translating to “easterners” in Hebrew.

Bukharian Jews mostly settled in the Uzbek cities of Bukhara, Tashkent, and Samarkand. They notably worked as craftsmen and merchants along the Silk Road.

While Uzbekistan is rich in its ancient Jewish history, it severely lacks a substantial Jewish population, which is exponentially shrinking, due to limited economic opportunities and varying degrees of antisemitism after the collapse of the Soviet Union.

The dwindling population of Bukharian Jews has created real issues that the community must face, including a lack of diversity of marriage options, pressure from the family in the diaspora to leave, and the inability to convene a basic prayer service, which requires a gathering of 10 Jewish men.

The discussion on the Bukharian Jewish experience resonated with students attending the event as some were of Mizrahi and, more specifically, Bukharian descent. The program provided an important representation of the Central-Asian Jewish community on UF’s campus.

For the Bukharian Jewish community, maintaining the presence of a Jewish homeland in Israel is crucial, and migration to the country before the rise of Zionism in the late 1800s exhibits this.

The Moussaieff Synagogue built in the early 20th century is a pillar of the Israeli-Bukharian Jewish quarter and still serves the community today. For over a century and a half, the Bukharian Jewish community has migrated to Israel through different waves, often fleeing persecution and hostilities in the diaspora.

In more recent history, under Soviet rule, the Bukharian Jewish community suffered endemic antisemitism that plagued the bloc. All Jewish schools and Bukharian language schools were shut down. The properties and wealth of Bukharian Jews were seized by the USSR and redistributed accordingly.

Stalin directly worked to eradicate the presence of Judaism in the USSR and subsequently jailed Jewish leaders throughout the 1930s. This led to a wave of 4,000 Bukharan Jews who made aliyah to Israel.

Further antisemitism rose in Central Asia around the events of the Six-Day War, which led to another wave of Bukharan migration to Israel. Despite the Soviet government breaking diplomatic relations with Israel and banning Jewish aliyah at the time, 8,000 Bukharan Jews escaped from the USSR to Israel in the 1970s.

The blatant and pervasive antisemitism of liquidating the Jewish presence in the USSR and anti-Zionist propaganda directly caused the Bukharian Jewish community to flee the Soviet states of Central Asia for refuge in Israel. By 1991 the USSR fell, and Bukharian Jews continued to flee.

The Bukharian Jewish quarter in Jerusalem is rich with the community’s historical presence in Israel. Construction of the quarter began at the turn of the twentieth century and pre-dates the modern state of Israel.

The impact of Bukharian Jews in Jerusalem is undeniable on both a human and infrastructural level.

The Bukharian Jewish community rose from adversity in the diaspora and reclaimed their historic ties to Israel through the decades. The community has provided a legacy for themselves in Israel, where they continue to thrive today.

“I believe it was an important event for every Jewish gator to attend to broaden their knowledge and understanding of different Jewish communities around the world,” Sakethou said.

It is vital that the presence, traditions, and oversight of the remaining Bukharian community are preserved and supported. Further, educational programming like the Israel Week event with Manashe is critical in keeping the Bukharian presence alive for Jewish communities, especially where their representation may be lacking.

About the Author
Phoenix Berman is an undergraduate student at the University of Florida pursuing a Bachelor of Arts in International Studies with a concentration in Europe. Phoenix is interested in global politics, investigative journalism, and is learning the Hungarian language.
Related Topics
Related Posts
Comments