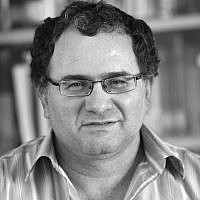 The Blogs
Yair Sheleg
Apply for a Blog
Advertisement
Please note that the posts on The Blogs are contributed by third parties. The opinions, facts and any media content in them are presented solely by the authors, and neither The Times of Israel nor its partners assume any responsibility for them. Please contact us in case of abuse. In case of abuse,
Report this post.

At the time of this writing, it is still unclear whether the much-needed efforts to form a unity government will bear fruit. But even if – and when – this happens, we will still need to deal with the huge political crisis that has unfolded over the last year, and particularly in recent weeks. All of us, myself included, thought that this crisis was largely about one individual, and centered on a question of ethics: Is Binyamin Netanyahu is fit to serve as prime minister, or not? But over the weeks that have passed, since the third round of elections, it has become clear that its roots run far deeper, and in fact- lie in the ever-widening gap between the two main pillars of the State of Israel’s identity — its “Jewish” and “democratic” components.

The split between them began after the traumatic events of the Yom Kippur War. It was driven by a feeling that the Labor movement’s version of “Jewish and democratic” identity was no longer sustainable. Thus, the religious elites of Israeli society slowly began to pull things in the “Jewish” direction, while the secular elites simultaneously pulled toward the “democratic”—or universal—direction.

Consequently, though there would seem to be almost complete consensus regarding the framing of Israel as a “Jewish and democratic” state, in practice – each of the camps is fighting to advance one component of that identity—the Jewish or the democratic-over the other. Each is driven by a sense that the other side is extremist and is seeking to do away with one of the two components of Israel’s dual identity. In turn, each side believes that this attempt should be combatted with the same degree of extremism, by emphasizing only the opposite component. Moreover, fear of the other side’s extremism is sometimes translated into legitimizing the use of extreme countermeasures, even before the other side has taken any steps.

Here lie the deep roots of the current confrontation over the formation of the government. The blows struck by Netanyahu against the state’s democratic character, by railing against law enforcement agencies and the media, and even more so by threatening to undermine the status of the Supreme Court and to curb its powers to deal with future attacks on Israeli democracy, have granted internal legitimacy to the opposing camp to attempt to join forces with the Joint List, despite the Arab parties’ longstanding opposition to Israel’s Jewish identity. In turn, this step gave the Right its own internal legitimacy to aim at dealing another blow at Israeli democracy by preventing the Knesset from holding a vote, supported by a majority of its members, and then even refusing to abide by a Supreme Court ruling requiring that this vote be held.

This is a highly dangerous whirlwind. Should it continue, it is liable destroy Israeli society from within. . The more the proponents of “democratic” pull in one direction, the more the “Jewish” camp will pull in the other. And this will go on and on, until everything falls apart. Thus, the formation of a unity government that will halt this dynamic is an existential must. Even so, it will be just the first step in a long healing process, at the heart of which will be the need to find a new equilibrium between “Jewish” and “democratic,” and also to involve the Arab public in this process as well.

Public and educational discourse toward this end should focus on two main messages. The first is pragmatic and political: If Israel is not Jewish, it cannot be democratic. The more that Israel’s Jewish majority fears for the Jewish character of the state, the less it will be tolerant and supportive of the state’s democratic values. This is the case since from its perspective; this is not only a cultural question, but also  an existential one. Moreover, even though there are flaws in Israeli democracy, it is undoubtedly the most democratic state in the Middle East, and this too has an impact on internal processes within the country’s Arab community. The very fact that Arab citizens who are interested in doing so, can engage in struggles over issues such as the status of women or of the LGBTQ community in Arab sector —something which is impossible in any other Arab country, derives from the democratic character of Israeli society. Without a democratic Jewish majority, Arab society in Israel will not be able to develop in a democratic direction.

Yet there is a second, even deeper message that needs to be conveyed: In truth, both “Jewish” and “democratic” are two expressions of a single shared value—the value of human dignity, which includes both universal human dignity, and, Jewish human dignity, which has repeatedly been crushed (on many occasions, sometimes to the point of losing Jewish lives) during the two millennia in which the Jewish people did not have its  own sovereign state.

Instead of treating “Jewish” and “democratic” as two separate value systems, and rather than treating them as components of a zero-sum game, we should recognize that they both belong to the same family of human dignity values. Just as the tension between values such as the right to privacy and freedom of speech does not necessarily lead to  a zero-sum game between them, but rather to recognition of the need to find balanced solutions, so the recognition that “Jewish” and “democratic” are both expressions of human dignity, can change the discourse on this issue, from one that is based on a zero-sum approach, to a search for balanced and moderate solutions.