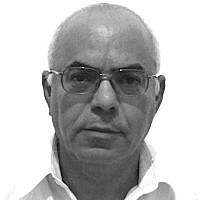 The Blogs
Yisrael Ptichi
Apply for a Blog
Please note that the posts on The Blogs are contributed by third parties. The opinions, facts and any media content in them are presented solely by the authors, and neither The Times of Israel nor its partners assume any responsibility for them. Please contact us in case of abuse. In case of abuse,
Report this post. 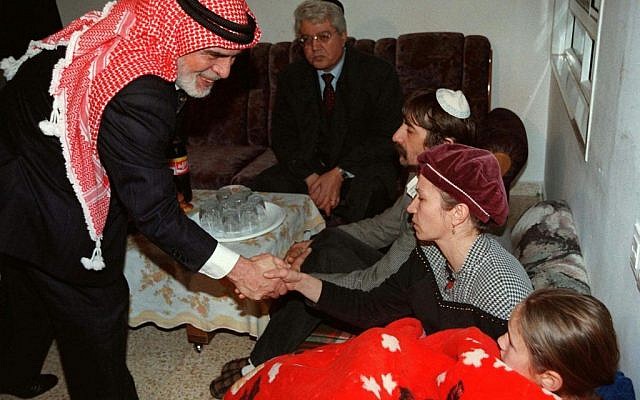 In this Sunday, March 16, 1997 file photo, King Hussein of Jordan shakes the hand of members of the Badayev family in Beit Shemesh who were in mourning after their daughter Shiri was killed by a Jordanian soldier. King Hussein came to Israel to offer condolences to the seven families who lost their daughters in an attack on a class trip. The Jordanian soldier who killed seven Israeli schoolgirls in a 1997 shooting rampage was released Sunday, March 12, 2017, after serving 20 years in prison. (AP PHOTO/GPO/HO, File)

Living in our small country in a dangerous Middle East, we thought that our lives changed for the better when in 1994 Israeli Prime Minister Yitzhak Rabin and Jordan’s King Hussein signed a peace treaty under the patronage of United States President Bill Clinton. It was, we thought, another step on the difficult road to having our prayers to live in peace with our Arab neighbors answered.

But 20 years ago this week, a Jordanian soldier came into my family’s life and with a spray of deadly bullets changed it forever. He suddenly opened fire on a group of grade 8 school girls who were visiting a park on an island in the famous Jordan River Valley, established to celebrate peace between our countries.

My 13-year-old daughter Sivan and six of her classmates were murdered on what ironically is called “the Island of Peace.” The euphoria we Israelis had from the peace treaty with Jordan died with the bullets that shattered our hopes for peace between our peoples.

Sivan was a bubbly young teenager who loved life and was loved by everybody she met. She also loved sports and an annual basketball tournament in her name for grade 8 girls has both Arab and Jewish teams, proving that we can indeed live together in peace.

The horror of that day lives with us still. It started with the sick pit in your stomach of growing fear as more and more people called with news of the attack, to driving to the hospital beside the tranquil Sea of Galilee, to identifying Sivan’s watch and then her body.

In the shock and horror of mourning seven young girls who were senselessly murdered, we also had to deal with the incomprehensible hate coming from some sectors in Jordan: legislators who praised the murders in Jordan’s parliament, hundreds of lawyers who rushed to defend the soldier, Jordanians who called for cancelling the peace treaty, and the soldier himself, who regretted that his gun jammed and he couldn’t murder more young Israeli girls.

Into the sea of our anguish came Jordan’s leader, King Hussein, who visited the homes of the mourners to apologize personally for the senseless act of the soldier under his command and told us he felt in his heart the girls were his own. In our Jewish tradition, we greeted him with bread and salt and repeated the special blessing reserved for being in the presence of a king, in which we thank the Lord for bestowing His dignity on the flesh and blood that is the king. The king sat on the floor with the grieving families — a humbling image of virtue and humility that left a lasting impression on all Israelis.

In Jordan, a life sentence is only 20 years in jail. That is the law of their land and this week the murderer of my daughter and her classmates was released from jail and is a free man. This child murderer, Ahmed Daqamseh, said on his release from prison that we Israelis “are human scum … should be burned or buried.” Twenty years in jail did not cure his hatred, and he bears no remorse for having mercilessly taken the lives of seven little girls.

We have a cold peace with Jordan and with Egypt. So far, the peace is only between our governments and not fully between our peoples. Our nations do not fight, although some of the people there — I pray they remain a minority — still carry so much hatred in their hearts that they want to tear up the peace treaties and sacrifice more innocent people to feed their hate.

I do not. I want peace for my family and my country. We suffer the loss of my beautiful daughter and endure it to this day, yet I do believe that peace will come eventually. The hardest peace may indeed be that between Israelis and Palestinians. I look to the United States as the power that may be able to bring the two sides to an eventual agreement.

Until then, it is my wish that in the same way King Hussein touched our hearts with his decency, his spirit will seep into the souls of Jordanians and Palestinians, and they will adopt his mantle of peace and know that as King Hussein said, we are all “members of one family” and “If there is any purpose in life it will be to make sure that all the children no longer suffer the way our generation did.”

Yisrael Ptichi’s daughter Sivan was murdered, along with six other girls, in 1997 by Jordanian soldier Ahmed Daqamseh.

About the Author
Yisrael Ptichi's daughter Sivan was murdered, along with 6 other girls, in 1997 by Jordanian soldier Ahmed Daqamseh.
Related Topics
Related Posts
Comments