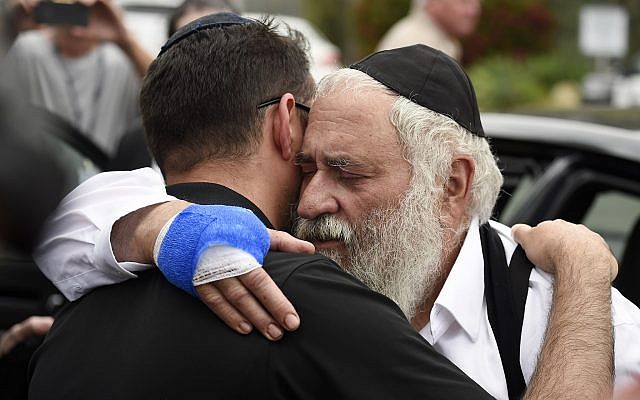 Rabbi Yisroel Goldstein, right, is hugged as he leaves a news conference at the Chabad of Poway synagogue, April 28, 2019, in Poway, Calif.ornia (AP Photo/Denis Poroy)

“Inside every cynical person is a disappointed idealist,” said the great American philosopher and thinker George Carlin (1937-2008). No statement captures the two ends of Carlin’s sentiments as much as the verse “Love Thy Neighbor as Thyself” (Vayikra, 19). Like thyself?! Sure. We all heard of the Golden Rule: “Treat others as you would like others to treat you” or “Do not treat others in ways that you would not like to be treated”. We tell that to school kids almost every day. Yet to expect anyone to be able to love and care for another person like they would for themselves is a whole different kind of expectation.

The next step cynics, and rationalists, can ask is: does this work—like a math equation—in both directions? Can you apply the Golden Rule in both directions; “Treat others as you would like others to treat you” so if you do not mind being mistreated can you mistreat others?

The most celebrated rabbis in the Mishnaic times struggled with this very question:

“Ben Azzai said: “These are the generations of Adam” (Bresheet 5:1) is a great principle in the Torah. Rabbi Akiva said: This is a great principle of the Torah: “You shall love your neighbor as yourself” (Vayikra 19:18). Thus, one should not say, “Since I am scorned, I should scorn my fellow as well; since I have been cursed, I will curse my fellow as well.” (Bresheet Rabbah, Parshat Beresheet 24)

Rabbi Akiva and Ben Azzai disagree on what the core of human interaction ought to be based on. Neither disagrees with any of the above verses in the Torah. The question is which one is the center of it all. Ben Azzai sees the key to human dignity in respecting God’s image, which rests in every human being. When doing so there can be no distinction between one person or the other; all are created in the image of God. Rabbi Akiva disagrees. The nexus and epicenter of how we treat others are not vested in seeing the image of God that is in them; if it would one would argue: “well, I have the image of God in me, and I suffer, let others suffer too!” Our treatment of others

R’ Yitzchak Bart, an Israeli constitutional scholar and lawyer, explains the difference between these two approaches as the difference between a dynamic treatment of others vs. a static treatment of others. When we respect others because they are treated in the image of God, things cannot get too bad, but they also can’t get too good. Such an outlook is similar to the United States Declaration of Independence:

“We hold these truths to be self-evident, that all men are created equal, that they are endowed by their Creator with certain unalienable Rights, that among these are Life, Liberty and the pursuit of Happiness. ”

We treat others with dignity and respect; we do not infringe on their rights, and hopefully, they do not infringe on ours. According to Ben Azzai, the most fundamental aspect of interacting with others—akin to the United States Declaration of Independence—rests on boundary setting; recognizing others are created in the image of God and are to be treated as such.

Rabbi Akiva takes a different—warmer—approach. Do not look just at how not to treat your friend, see what you can do to treat them well. Few commentators articulate a balanced, yet passionate approach to this commandment like Rabbi Moses Ben Nachman (1194–1270) in his commentary on this verse. He writes boldly:

“The phrase “love your neighbor as yourself” is an exaggeration, since the heart of a person will not accept that he love his fellow as he loves himself. Moreover, Rabbi Akiva has already taught (Bava Metzia 62), “Your life comes before the life of your fellow.”

And yet, the Ramban goes on to state passionately:

“The Torah here enjoins us that one should love his neighbor with every item with which he loves himself, [to receive] every benefit [that he wish upon himself]…sometimes a person may wish upon his neighbor certain benefits, but only wealth, not wisdom and the like. But even if he wishes his cherished friend well in everything, i.e. wealth, honor, knowledge, and wisdom, he will not make him equal to him, but rather he will still desire in his heart a larger share of all the benefits. And [so] the Torah commanded that there not be this petty jealousy in his heart. Rather, a man should wish his fellow well in everything, just as he does in his case, and place no limitations on his love.”

According to this reading, inspired by the proximity to the prohibition on taking revenge or bearing a grudge, the definition of “love they neighbor”, is to be happy for them. Be happy for the other person, do not see their success as detrimental to your own. Just as you would not be upset if you win the lottery, do not be upset when your friend succeeds. In Nachmanides’ view, this is the meaning of “love they neighbor like thyself”, be happy for others, and do not begrudge their success. In this view, you can come close to loving others like yourself. Yet it is a far cry from taking action and caring for others.

Sometimes, it takes the negative to understand the positive.

Rabbi Joseph ben Isaac the Tosefite, also known as the Bechor Shor, of Orléans (12th century) in his commentary, shines a radically different perspective on this verse. The rabbis in the following episode illustrate the definition of not taking revenge or holding a grudge. Mr. A came to Mr. B on Sunday, asking if he can borrow a hammer. Mr. B, who had a hammer, said no. Just because. The next day Mr. B needed a screwdriver and came to Mr. A, who had one and asked him for it. If Mr. A refused to lend Mr. B the screwdriver, reciprocating for the previous refuse to lend him a hammer, that would be the definition of revenge. If Mr. B. would agree to lend the screwdriver but then add: “I am giving this to you because I am kinder than you”, that would be the definition of bearing a grudge.

Rabbi Yosef Bechor Shor asks: why do we need this commandment? Why did the Torah not command that we lend our hammer or screwdriver in the first place? Why wait for the aftermath? His answer comes in the most powerful terms. When we don’t lend something to a friend, it is usually simply because of our attachment to the item. When we don’t lend it in response to them not lending it, it is personal. God says: “Tenatze’ ach Ahava she’ yesh lecha immi“, let the love I have for you, overcome the resentment you may feel to him. Lend it to him because of my love for you.

When God says, “Love Thy Neighbor as Thyself,” he is not talking about how much you love yourself; He is talking about the Love that He has for you. The more you recognize the love God has for you, you will be ready to project that love unto others. This generation, more than any, has proved that focusing on “rights” and “entitlement” cannot sustain society. We need a world in which we take action to help others, care for others, and look out for one another. “Tenatze’ ach Ahava she’ yesh lecha immi”, let the love I have for you, overcome the resentment you may feel to him. Get up, see what you can do to care for others, even if you have legitimate hard feelings towards them, because of the love I have for you. In this understating, it is not “love thy neighbor like yourself,” it is “love thy neighbor, as I love you.” May we be blessed to see a world that learns to look beyond a passive “bill of rights,” and embraces mutual responsibility and care for others.