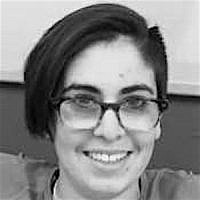 The Blogs
Hannah C. Bellinson
Apply for a Blog
Advertisement
Please note that the posts on The Blogs are contributed by third parties. The opinions, facts and any media content in them are presented solely by the authors, and neither The Times of Israel nor its partners assume any responsibility for them. Please contact us in case of abuse. In case of abuse,
Report this post.

Last night we were all nervous and excited. It was Election Day and a lot of us were hoping for Clinton to be victorious. People in the States who hadn’t voted were getting their ballots in last minute. There was a certain buzz in the group because it was our first presidential election out of the country, and for some of us it was the first time voting in an election.  As we chatted at dinner we all knew what was at stake.

Some people decided to stay up all night to watch all of the results come in. I tried to go to bed before midnight but I was restless, so it took some time for fall asleep.  Then I woke up at 5:30am.  As I rolled out of bed and walked into the common room, I felt excited but also slightly somber. These were the last few hours before we found out who would be our new president elect, either Clinton or Trump.

As I started to watch I noticed Trump was ahead, ever so slightly. I decided to quickly Face Time my parents and grandma.  After talking to them both I hunkered down in my chair to watch the results roll in. Some people in my group went to The American Center for a short period of time to watch the election.

At about 6:30 or 7:00am when everyone had returned, we continued watching together.   We were sitting in the common area on the floor, chairs, couches and mattresses, wherever there was space. We were talking together and on phones as we watched and we were getting worried.

As time went on, it became obvious that Trump was winning. Some of us went down stairs to get breakfast before coming back up to watch. We learned that our first class was canceled so we were able to watch until the end, when Trump had officially won. We watched his speech and at this point people were crying and having slight panic attacks. We were all thinking similar things about this. Then we learned the second class of the morning was cancelled too.

We all did different things until our afternoon classes. We rested, went to get food, exercised, processed, called family or just talked together.  In one of our afternoon classes, we did an exercise about the election. We had fifteen minutes to do some private interpretation of our thoughts and feelings. For the last part of class we had small group discussions about what we were thinking or feeling.

The rest of our classes were normal classes, which for me was a good distraction from everything I was feeling.  I know I was feeling a range of emotions, including fear, sadness, worry and anxiety.  I was feeling these for so many reasons and they were all happening at the same time.

About the Author
Hannah C. Bellinson is from a small town in southern Oregon. She is a student taking an academic gap year before she goes to college. Hannah hopes to study theatre and film.
Related Topics
Related Posts
Comments