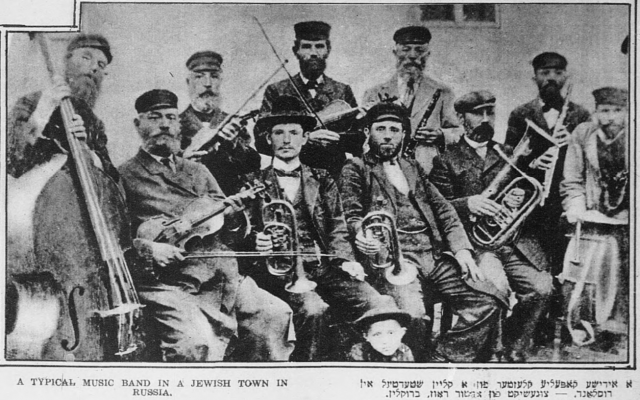 Who is punk if not they? Unidentified Russian klezmer band. 4 March 1923 (National Library of Israel via Wikimedia, author unknown)

On Sunday night, through the ministrations of a club called The Friends of Jewish Music, of which I am a dues-paying member, I was able to see a concert by the Budapest Klezmer Band here in Geneva.

The event was held in a converted art déco cinema, the Alhambra. To my surprise, the place was practically sold out.

(The Alhambra Decree was an edict issued in 1492 by the Catholic monarchs of Spain ordering the expulsion of Jews. Is this a riposte?) 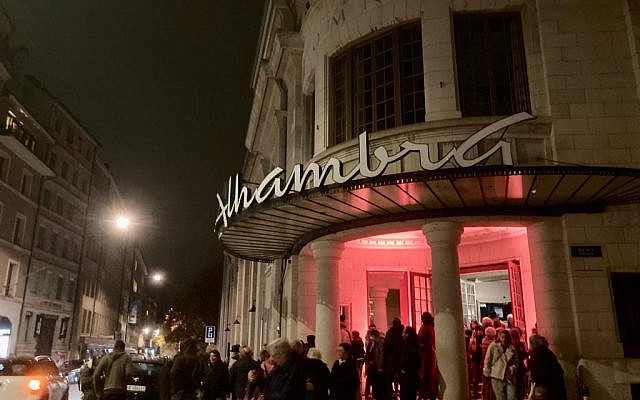 The Alhambra theater in Geneva on November 20, 2022. All photos in this article were taken by the author.

Geneva can have an atmosphere as cold as the bellies of the perch in its famous lake. Banking is big. So is diplomacy. These are professions that privilege discretion.

Several layers lower in the geological record of this town is Calvin and Calvinism. Those aren’t terms that scream joy, either.

But to say that the Budapest Klezmer Band, which has been going in Hungary for 32 years, brought warmth to that hall would be to say too little. What the Hungarians provided was a blast of steam hot enough to satisfy the walrus-shaped denizens of a shvitzbad.

The leader of the band is the composer and pianist Ferenc Jávori. He grew up in Munkács (Mukachevo, now in Ukraine), a city I remember for its Russian Orthodox nunnery and Ruthenian cathedral, the wild dogs in its streets, and its freezing mud. Jávori played klezmer with the last surviving musicians from a once-booming, now-bust community. 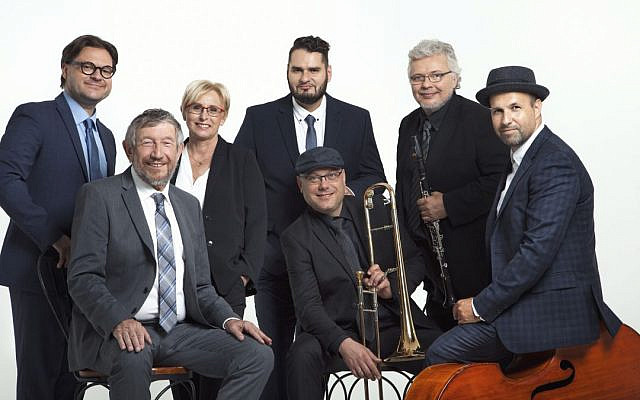 But on Sunday it was his trombonist who shone. Gábor Barbinek manipulated the huge horn with grace, producing tooth-rattling blasts that were just what the Genevans needed.

The concert seemed to contravene convention. Consider the context: last year at this time we were all masked and socially distant. And here we were, crammed together in the dark, while on the stage the man with the horn opened a spit-valve to let out a globule of condensed breath.

Surely that was some infraction.

Klezmer was made to trespass and wander over boundaries. It’s a hybrid music, as Yiddish is a blended tongue. But it surpasses all its components. And it’s when this old music is executed like a misdemeanor that klezmer is most itself. 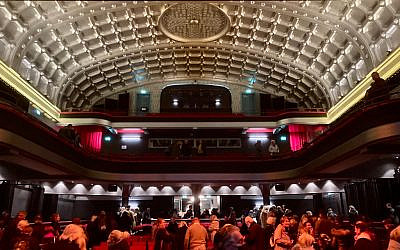 When I was younger, klezmer was my rock. If you want to take that as a confession that this music kept me stable in stormy times, be my guest. But I mean that, for me, klezmer did what rock ‘n’ roll is said to have done for others.

I was in high school in the early ’90s. Think of the aural environment of that time: one was subjected to “Top 40” radio in the supermarket. Something by Dionne Warwick could still be heard at the dentist’s office. People thought Kenny G was good.

Then there was rock, which by that time had gone through a thousand permutations and was inescapable anywhere. Rock had defined the generation of my parents and provided the soundtrack to the sexual revolution. To me, it was torture. Electric music seemed oppressive: un-human, even inhumane. And I didn’t like the explicit lack of continuity with the past – the spurious thesis that it was normal for each generation to hate the one that came before.

In any case, rock wasn’t mine. But when I first heard klezmer, something inside me burst. I heard a snippet on the radio, probably on Terry Gross’s show, and I was off.

CDs were new. I made a beeline for Goody’s Music at the mall and pawed over the bin marked “World Music” — how quaint that sounds now — looking for something Jewish.

What I found was a disc with the Dome of the Rock on the cover and a title like “Israel: 20 Most Popular Songs.” I bought it. I kept it, because in those days you took what you could get. But, as readers will guess, it was not klezmer. 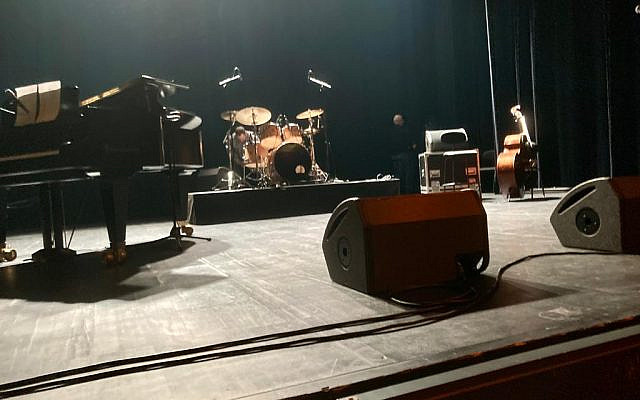 Today I know that what I was hearing was a repackaged recording from 1967 by “The Beit Rothschild Singers.” The accordion was important. Rhythmic clapping played an unironic part. Hebrew was the tongue. Soon, at my insistence, we were the only Catholic family in Milwaukee listening to “Finjan”. We thought he was a person, rather than a coffeepot.

But I was frustrated. Where was the clarinet? Where were the winking hesitations in the melody? Where was the tension, transmuted into something that sounded free?

It would take months before I found anything that resembled klezmer. When I did, I clung to it. I wanted to inhabit it like a second home.

I had arrived at a good time. There had been the so-called Klezmer Revival in the late ’70s, and those folks had done great work. By my time, the Klezmatics were going strong. They blend klezmer with other styles. I was a purist and didn’t like that. But their musicianship is unparalleled. In 1998, they released “The Well” with Chava Alberstein singing. As far as I’m concerned, that recording is a monument for the ages.

Out where the grass grows wet,
A well stands lost in thought.
Every night girls come for water
With buckets in their hands.
‘Neath the sun, like white bears,
Days sprout in a great orchard.
And in the distance of the stars
The boys are dancing in a ring.

By the time I got to New York, a band called Golem was getting started. I think I first saw them — in a very early incarnation — at what was called a “klezmer brunch.” That band, led by the brilliant Annette Ezekiel, is still around. They showed up in a Netflix series a while ago. They perform klezmer with a sensibility they explicitly label “punk.”

That’s fine with me. But klezmer, if it’s good, is always punk.

Sunday night the ragged musicians of Galicia and Volhynia and Podolia and Bessarabia came to play. Who is punk if not they?

The word “klezmer” has a Hebrew etymology: klei, meaning “tools, utensils or instruments of” and zemer, “melody”. The word was applied, in time, to the musicians more than the instruments.

I imagine thin itinerants whose utensils of melody were tools of work — for whom a portable instrument had to be played in order to keep body and soul together. Whose livings and lives were fragile. 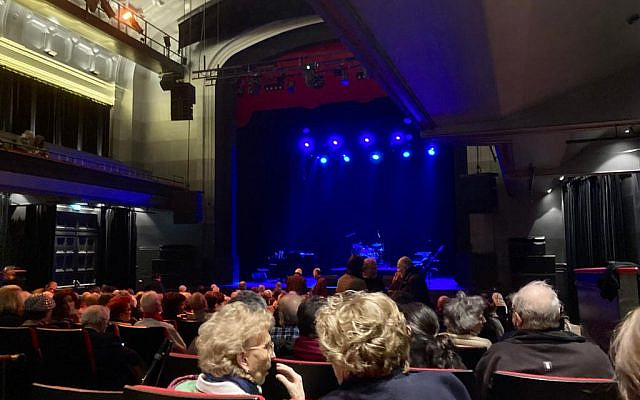 It’s all so far from Geneva.

Baby boomers who were all rather well-nourished formed the bulk of last night’s crowd. They seemed to have a predilection for personal dignity. But that trombone was playing. And as the audience members who had walked in demurely an hour earlier began to slap hands and gyrate and smile, it was clear who would win in the end.

I hope it will survive, this ragged klezmer. It is human and humane, at a hinge in time when we’re plasticized and marked with a QR code. It is also a witness. It says, in the words of a priest I once knew, “there is hope at the heart of horror.”

There is hope in the mud, even now.

The theologian will speak of theodicy: the vindication of divine providence in a world where evil so noticeably exists. The word was fabricated in the late 18th century from Greek: theos ‘god’ plus dikē ‘justice’. “Théodicée” is the title of a work by Leibniz, who thought he could prove that any world without the evils that trouble our lives would have been worse than the current one — and so let God off the hook.

And he was dead wrong.

Perhaps there is no way to justify the ways of God to men.

Could there be a good God when there are viruses? When the city freezes, even as its vaults jingle with money? When there are no more klezmorim in Mukachevo?

Last Sunday night, a trombone had the answer.

About the Author
Born in Wisconsin, Erik Ross is a priest of the Dominican Order who lives in Switzerland and comes often to Israel. For many years, he was stationed in Poland. He has long been active in Jewish-Christian conversations. He writes here with the permission of his major superior.
Related Topics
Related Posts