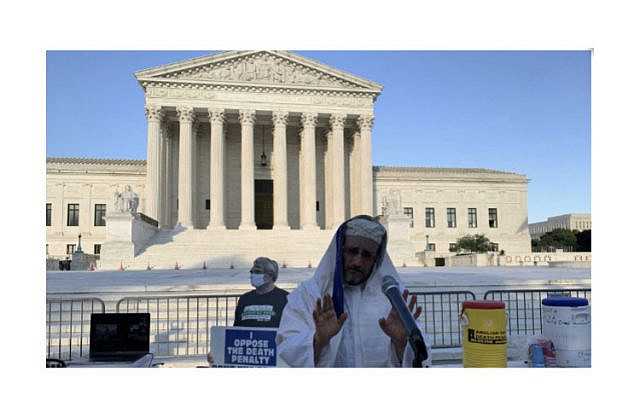 We, the thousands of members of “L’chaim! Jews Against the Death Penalty,” lament that you have broken your vow yet again to work toward death penalty abolition. You continue to fail at keeping your promise to advocate for the abolition of the federal death penalty in the United States and to support measures aimed at reducing and eliminating the use of capital punishment at the state level. The latest disappointment came on Dec. 15, 2022, when you once again voted against a supermajority of 125 nations (including Israel) and instead said NO to the United Nations General Assembly resolution calling for a global “Moratorium on the Use of the Death Penalty.” The explanation you offered here is yet another abomination that flies in the face of the UN’s Universal Declaration of Human Rights, clearly states that “the death penalty undermines human dignity that is inherent to every human being.” This is a precept that is accepted by 70 percent of the nations of our world.

In the Jewish tradition, we take our vows very seriously. Each year, we ask for forgiveness for broken vows in what is known as Kol Nidrei. This liturgy also has become the consummate Jewish petition related to forgiveness and the seeking of repentance. Our group has chanted this prayer for years now in front of the US Supreme Court as part of the annual Fast and Vigil to Abolish the Death Penalty, as we ask forgiveness for the national sin of the death penalty.

Given the mockery of human rights that you have allowed to continue despite your vow, we recommend you offer your own version of a Kol Nidrei: a national apology for your broken promise.

And yet, redemption is always possible. As a former prison chaplain, I know this well. I have witnessed profound change among people who have committed grievous sins, and even in myself, who used to support the death penalty before coming to my senses. You, too, still can take action at the federal level by following the lead of Governor Kate Brown in Oregon just this week, and others before her, by commuting all death sentences under her jurisdiction. Nevada, as I write this, is considering doing the very same. You also can demolish the federal death chamber in Terre Haute, Indiana and incentivize states to abolish their death penalties. And when the next UN resolution on the matter of global abolition comes up again – as it shall – you can do the right thing and vote YES.

Our partners at Death Penalty Action remind us in this petition that, at a time like the present when executions are on the rise in countries like Iran and Saudi Arabia, including executions of people accused of participation in nonviolent protests against injustice in their countries, it is imperative that the United States distance itself from such practices. If our nation wishes to have any credibility among the so-called “leaders of the free world” in efforts to uphold human rights across the Earth, then we must end the hypocrisy of the violation of the most basic of those rights –  the inviolability of human life.

Our group corresponds with all Americans in line for state-sponsored murder and we can attest to the psychological torture inherent in any so-called  “row of death.” We also regularly bear witness to the capacity for change that can transcend those circumstances, as the New York Times covered last week in an opinion article describing our spiritual connection with Ramiro Gonzales, a would-be kidney donor on Texas Death Row.

You, Mr. President, are Catholic and are no doubt well-aware of the Pope’s recent Prayer to Abolish the Death Penalty. As a Christian, you no doubt also recall that Jesus was one such innocent execution victim, as Shane Claiborne powerfully explains in his work “Executing Grace: How the Death Penalty Killed Jesus and Why It’s Killing Us.” For those of us who are Jewish, we consider as well the plague of wrongful convictions and executions in our land and recall the words of the Jewish sage Moses Maimonides (1135-1204), who said “It is better to acquit a thousand guilty persons than to put a single innocent one to death.”

Last, but far from least, we shall never forget the Nazi legacy that we continue every time we put someone to death via lethal injection, which is the most common American form of execution. This practice was first implemented on this planet by the Nazis as part of the Aktion T4 protocol to kill people deemed “unworthy of life,” as developed by Dr. Karl Brandt, personal physician of Adolf Hitler.

Every time we use this so-called “Nazi needle,” we carry on their vision. The same holds for Zyklon B, the gas used in Auschwitz on our ancestors and now offered to kill people in Arizona, or for the gas chambers being erected in states throughout our land. As famed theologian Martin Buber knew so well, in the wake of the events of the 20th century, any form of state-sponsored murder only carries on the Nazi legacy of the same.

Holocaust Survivor and Nobel Laureate Prof. Elie Wiesel (1928-2016) echoed this when he famously said of capital punishment: “Death is not the answer.” He also exhorted this: “With every cell of my being and with every fiber of my memory I oppose the death penalty in all forms. I do not believe any civilized society should be at the service of death. I don’t think it’s human to become an agent of the angel of death.” This is our anthem in “L’chaim! Jews Against the Death Penalty.”

Mr. President, your “NO” vote at the UN came just the day after the 18th execution of the year in our land – that of the third US Marine veteran to be executed in as many months. In Hebrew, 18 signifies life. In the USA in 2022, it clearly denotes death. Which side are you on, Mr. President?