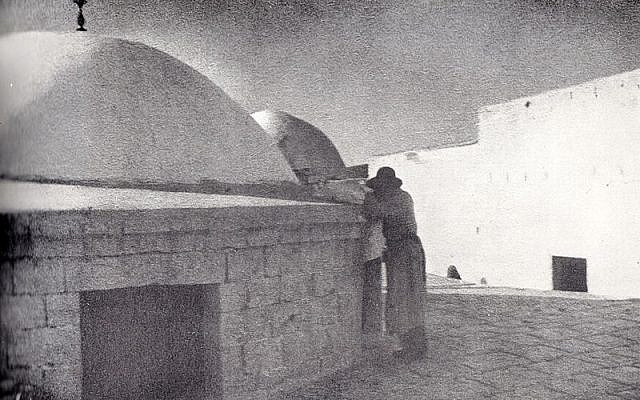 Man praying at the Tomb of Rabbi Shimon bar Yochai in Meror, circa. 1950's. Public Domain.

On Lag B’Omer, Jews all over the world celebrate Rashbi’s hillula. Rashbi, of course, is an acronym for the Tannaic sage, Rabbi Shimon bar Yochai. Or, is it Rabbi Shimon ben Yochai? Why do we sometimes use the word ben to mean “son,” and sometimes use the word bar? What is the difference between these two words? Moreover, why is a Jewish boy coming of age called a bar mitzvah, why not a ben mitzvah?

Simplistically speaking, the words ben and bar both mean the same thing — but in different languages. Ben means “son” in Hebrew, while bar means “son” in Aramaic. Indeed, whenever the word ben appears in the Bible, the Targumim translate it into Aramaic as bar. For this reason, ben is found in Hebrew texts, while bar is used in Aramaic texts. (The one possible exception to this is Prov. 31:2, which is written in Hebrew, but uses the word bar. However, see the Malbim who argues that in that context bar is a Hebrew word meaning “choicest,” not the Aramaic word for “son.”)

The word bar in Aramaic also means “outside” or “separate” and it is routinely used this way in the Talmud. For example, a baraita is a Tannaic teaching outside of the Mishna. Bar’s two meanings are reflected in a halachicdiscussionsurrounding how to properly write a get (bill of divorce).

Rabbi Yaakov Margolis of Regensburg (1430-1501) writes in Seder HaGet that when writing a get one should refer to the divorcer as “so-and-so ben so-and-so,” not “so-and-so bar so-and-so.” He explains that although the Aramaic word bar is used in all other legal documents, given that a bill of divorce must be as clear as possible, bar (with its multiple meanings) should be avoided in favor of ben. Rabbi Shlomo Luria (1510-1573), sometimes known as the Maharshal, supports Rabbi Margolis’ ruling but for a different reason. He contends that although in this context nobody would think that bar means “outside,” bar might be misconstrued as an acronym for the Hebrew phrase “ben reb” (son of Reb…). This creates a problem because it goes against the custom of refraining from using honorifics in bills of divorce. For this reason, explains Rabbi Luria, one should avoid writing bar, and use ben in writing aget.

As is his way, Rabbi Shlomo Pappenheim of Breslau (1740-1814) traces both of the words in question to their respective two-letter core-roots. He explains that the root BET-NUN refers to “building” and “producing.” The word ben fits with this explanation because children are “produced” from their parent’s marriage. Other related words include binyan (“building”): the building materials even (“stone”) and teven (“straw”), and even avnayim (a “birthing chair,” which helps facilitate the birthing process). He also writes that the words binah/tevunah (“understanding”) are related to this root as they are the “products” of contemplation and thought.

Rabbi Pappenheim maintains that the word bat (“daughter”) is also derived from the root BET-NUN and should really be spelled banat (like it is in other Semitic languages). However, the NUN is generally dropped, rendering the actual word bat. That NUN returns in the plural form banot (“daughters”).

Now, let’s continue on to the core-root of the word bar. Rabbi Pappenheim explains that the two-letter root BET-REISH refers to “exclusion” or “separation.” For example, the word bahr refers to grains which have been “separated” from the chaff, bor/borit is a cleaning agent used to “separate” and “exclude” filth, and bari (versus shemma) refers to a sort of certainty by which all other options have been conclusively “excluded.” We can add to this the common expression bar minan, “except from us”. In this spirit, Rabbi Pappenheim explains that bar means “son” because the child was “separated” from his mother’s person by the act of childbirth.

Now what does all this have to do with a bar mitzvah? But once we’re on the topic, if we call a boy a bar mitzvah in Aramaic (as opposed to the Hebrew ben mitzvah), then why do we call a girl a bat mizvah in Hebrew? What would the Aramaic form of bat mitzvah even be? Although technically the Aramaic word for “daughter” is barat, the Targumim tend to leave the Hebrew word bat untranslated, so bat can also be used in Aramaic (as Rabbi Eliyahu HaBachur writes in Meturgaman). Hence, a young lady’s coming of age makes her a bat mitzvah — even in Aramaic.

For some reason, the nomenclature for a young man’s coming of age is bar mitzvah. Why do we refer to the Jewish boy’s rite of passage as a bar mitzvah as opposed to a ben mitzvah? After scouring different sources I came up with three possible lessons that we may be teaching the bar mitzvah boy by using the word bar instead of ben:

Rabbi David Ovadiah of Tiberias (a nephew of Rabbi Ovadiah Yosef) explains in the name of Rabbi Meir Simcha of Dvinsk (1843-1926) that because the word bar also means “outside” it serves to teach the young bar mitzvah boy that he is now standing “outside” — on the threshold to entering his adult life. At this fateful juncture he has the capacity to decide whether he will choose the correct path or the incorrect path.

Rabbi Meir Mintzberg (son-in-law of the late Rabbi Leib Mintzberg, the spiritual leader of the Jerusalemite “Masmidim” movement) takes a different approach. Like Rabbi Pappenheim he explains that the word ben is related to “building” and “producing,” and connotes that the son is the product of his parents’ building and nurturing. The word bar, on the other hand, has the opposite connotation: Bar implies the “son” as somebody independent (“separated” or “excluded”) of his parents. It is thus an appropriate term for the bar mitzvah boy because it stresses that his personal growth is no longer in the hands of his parents who have “built” him up, but is now his own responsibility. (See Haksav V’hakabbalah to Ex. 12:43 who explains how the word ben in the construct form can be attached to a noun to become an adjective.)

By the way, you should know that whenever the Mishna or Talmud refers to the Tannaic sage “Rabbi Shimon,” this is actually Rashbi. Why then is he sometimes called “Rabbi Shimon” and sometimes called “Rabbi Shimon ben/bar Yochai?” In his lexicon of Talmudic sages Yechusai Tannaim V’Amoraim, Rabbi Yehuda ben Kalonymos of Speyer (a 12th century Tosafist) writes that anything Rashbi said before he was famous is ascribed to “Rabbi Shimon ben/bar Yochai” in order to clarify who said it, but what he said once we was already an important figure is attributed to simply “Rabbi Shimon” because everyone already knew who he was.