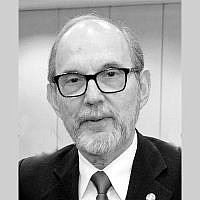 The Blogs
Osias Wurman
Apply for a Blog
Advertisement
Please note that the posts on The Blogs are contributed by third parties. The opinions, facts and any media content in them are presented solely by the authors, and neither The Times of Israel nor its partners assume any responsibility for them. Please contact us in case of abuse. In case of abuse,
Report this post. 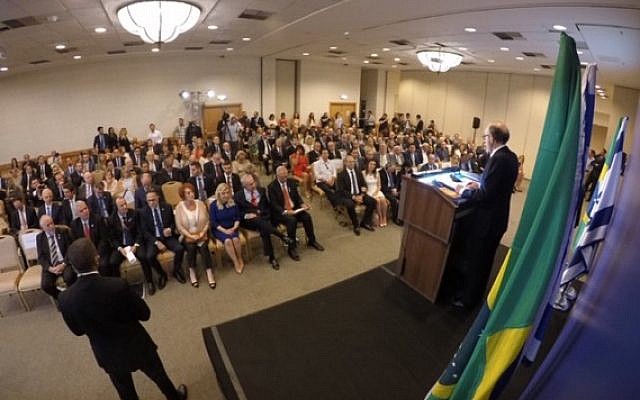 My level of excitement was very high when, on December 28, I witnessed the very first Israeli prime minister land in Brazil 70 years after the establishment of the Jewish state. Mr. Benjamin Netanyahu walked out that airplane wrapped in the blue and white colors of the Israeli flag, featuring a big Star of David on its tail.

I was born in Brazil to Polish immigrants who fled anti-Semitism in their country of birth in the 1930s. During my whole life, I have proudly held several positions in the Jewish community, including member of the board of the ORT Institute of Technology (13 years), president of the Rio de Janeiro State Jewish Federation (4 years), and vice president of the Brazilian Israelite Confederation, the country’s umbrella Jewish organization (six years).

Today, I hold the position of Israel’s Honorary Consul in Rio de Janeiro, for which I was appointed by Israel’s late President Shimon Peres, in April 2009. In 2016, I was awarded the title of “Honorary Consul of the Year” by Israel’s Ministry of Foreign Affairs.

I am a journalist who has been writing editorials in the Brazilian media for 20 years, including over 100 articles about Judaism- and Zionism-related topics.

In my nearly 30 years of Jewish-Zionist militancy, I had never seen such acclaim for an Israeli leader in Brazil, whether in the streets or in the governmental palaces. The honorable and friendly way that Brazilian authorities and the Brazilian people welcomed Prime Minister Benjamin Netanyahu in Rio and Brasilia was unique and unforgettable.

Therefore, I was deeply surprised and saddened by the statements of two members of the Brazilian Jewish community, published in The Times of Israel, telling that they disapproved the overwhelming majority of Brazilian Jews.

The statement by Mr. Fernando Lottenberg that the Israeli ambassador to Brazil, Mr. Yossi Shelley, totally ignored the Brazilian Israelite Confederation (CONIB) during the visit is not true.

Nine of 14 presidents of Jewish federations from Brazilian states across the nation have attended an event with Mr. Netanyahu. A CONIB vice president and former president of the Rio Jewish federation, Mr. Herry Rosemberg, served as master of ceremony at such event.

I was appointed by Ambassador Yossi Shelley to greet the Israeli prime minister. As a Brazilian citizen, as a Jew and as a Zionist, as well as being Israel’s honorary consul in Rio, the host city. This is not unheard of in Rio de Janeiro.

Already in 2009, the year I was chosen Honorary of Israel, Shimon Peres visited our country and we organized a reception in Rio, along with the Israeli Embassy, attended by over 1,350 people.

I was appointed by Israeli Ambassador Giora Becher to greet the Israeli president. At that time, both presidents of the Rio Jewish federation, Lea Lozinsky, and the Brazilian Israelite Confederation, Claudio Lottenberg, welcomed my nomination.

In Rio, I am the bearer of the highest honor bestowed by the State of Israel on a Brazilian citizen: the Honorary Consul title. And in Brazil there is only one more holding such title.

The “witness” cited in the article published by the Times of Israel – repeating Mr. Lottenberg’s words – is affiliated with the Brazilian Israelite Confederation he presides over, which makes her highly suspicious to qualify any occurrence.

It is important to inform the reader of the Times of Israel that Mrs. Patricia Tolmasquim is a longtime far-left activist of the Workers Party, also knowns as the acronym PT, which was founded by and presided over Brazil’s former President Luiz Inacio Lula da Silva, who is currently serving a 12-year sentence for corruption and money laundering.

Mrs. Tolmasquim has recently managed a group of Jews who called themselves “progressive” and visited the headquarters of the Federal Police to express her solidarity for Lula and demand his release. She seems to be not aligned with 95 per cent of the Jewish community in Brazil, she is seen as an ardent far-left militant who attends cocktails and parties. Therefore, she is not able to perform an unbiased criticism of the representatives of the State of Israel. Mr. Tolmasquim seems to have both the prime minister of Israel and his new “brother,” the president of Brazil, as right-wing rivals or even enemies.

The president of Brazil’s umbrella Jewish organization should be exempt of political bias. This is a fundamental condition for the tranquility and security of our community. Mr. Lottenberg seems to have a myopic philosophy and desire to reinforce a separation line between the Brazilian Jewish community and the State of Israel. To him, “We are Jewish, we are not Israeli.” I am proud to say out loud: the Jewish people is one, wherever we are.

Here are the burning questions: why didn’t any senior representative of the Israeli embassy attend the last convention of the Brazilian Israelite Confederation held in November 2018 in Sao Paulo? Why, for the first time in decades, was the president of Brazil’s umbrella Jewish organization NOT invited to the inauguration ceremony of a Brazilian president? Why didn’t Mr. Lottenberg welcome Mr. Netanyahu at the military base in Rio?

It is very sad that two (!) members of Brazil’s ardently Zionist 120,000-strong Jewish community have tried to smear one of the greatest moments in the Brazilian-Israeli relationship, reporting untruths as if they were relevant information. They are certainly smaller than the positions they temporarily hold.

About the Author
Osias Wurman is a journalist with over 100 articles published in Brazilian newspapers. In 2009, he was appointed Honorary Consul of Israel by late President Shimon Peres. Wurman serves as president of the Rio de Janeiro State Jewish Federation for four years – the longest period allowed – maximum and then vice president of the Brazilian Israelite Confederation for six years. Osias Wurman has been granted the Tiradentes Medal, the highest award given by the State of Rio de Janeiro. Wurman was a director of the Bloch communications holding, which comprised Manchete TV, Manchete magazine and Manchete radio.
Related Topics
Related Posts
Comments