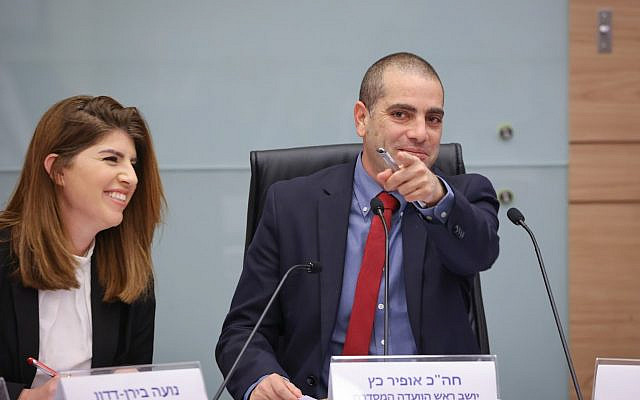 The Knesset's House Committee chair Likud MK Ofir Katz gestures during a debate on fast-tracking bills that would annul the citizenship of convicted terrorists who receive stipends from the Palestinian Authority, in the Knesset in Jerusalem, January 9, 2023. (Noam Moshkovitz, Knesset spokesperson)

Benjamin Netanyahu’s sixth government barely assumed office before its newly-appointed ministers — individually and collectively — began to rewrite basic political science concepts. The preliminary draft of their textbook confuses the government with governance, governance with governability, and all of these with democracy. In the process, members of the incoming coalition are ignoring conventional usages of fundamental terms as employed by most authorities throughout the world, while also, ironically, reversing their own significant contribution since 1977 to the formulation of guiding governing principles for Israel.

A government, according to common usage, is an entity exercising authority. In the case of a state government, it is that group of representatives designated by the majority to take on the task of managing public affairs. Here already, Israel begins to diverge from almost all other countries on the globe. What territory does it rule over? Who participated in its election? Over whom does it exercise power? And in what boundaries does it enjoy external legitimacy? None of the answers to these questions have been clear since 1967, when Israel assumed control over the lands and people formerly under the rule of Jordan, Egypt, and Syria. The problem is compounded today, when the incoming government has declared unequivocally that it views all the areas currently under Israel overrule as an integral part of historical Israel.

This perception — which entrenches the notion of “Jewish supremacy” over the entire land — was swiftly embedded even before the government was sworn in through modifications in The Basic Law: The Government, granting Itamar Ben-Gvir, the incoming minister of national security, control over the Border Police throughout the West Bank, and also civilianizing the military government (previously responsible for governing the West Bank and regulating the lives of its civilian population). The effects of these changes on the scope and the reach of the government (territorially and demographically) and on its powers (practically and morally) have yet to be determined. What is not in question is the essential ambiguity of the reach of the Israeli state both domestically and internationally.

However the Israeli state is defined, the concept of governance refers in general to the act or process of governing (i.e., to giving direction, meaning and coherence to the management of the affairs of state). The key tools of governance are laws, binding norms, and power arrangements, coupled with a defining language and discourse. Any government — and especially a duly elected one installed by the majority of the population — is expected to devise policies and assure their implementation. But the underlying assumption of all systems of governance is that there is a basic consensus on the nature of the interests of the state or, in other words, a common interest. In Israel today, and for quite some time, beyond survival in the most amorphous sense of the term, no such agreement has existed, as religious and ultra-nationalists continue to vie with liberals and pluralists over the essential binding norms of Israeli society and its being.

Even if some sort of guiding vision exists, its operationalization requires the constant interaction of two main components: politicians who design desired priorities, and professionals capable of ensuring that these preferences are carried out. The checks and balances between these groups enables the former to promote their immediate agenda and the latter to assure that the public interest is served. It is this delicate equilibrium which allows for that combination of innovation and predictability so critical especially in times of ongoing fluidity on a variety of fronts.

All the signs today point to the fact that the new government in Israel is doing everything — consciously and systematically — to equate the common good with what it wants here and now. A host of measures are indicative: starting with the subjugation of the judiciary (and especially the High Court of Justice) to government dictates through the announced intention to legislate an override clause, altering the definition of what is reasonable before the law, and interfering in the composition and manner of selection of the courts; politicizing heretofore professional appointments; revising policies related to Palestinians under Israeli control; promoting Israeli settlements throughout the West Bank; and restricting civil society organizations benefiting from foreign donation; to revising basic tenets of Israel’s foundational guidelines articulated in its Declaration of Independence; granting Jewish theocratic dictates a place of honor in the Israeli constitutional codex; and demoting the concept of equality for all citizens of the country.

All these and more are already being put into practice, ostensibly, legally through the support of a parliamentary majority but often quite clandestinely in practice while public attention is diverted elsewhere. Many government supporters — according to recent polls — do not approve of these moves and never imagined that their ballot would bring about the changes that are being carried out in their name. With near lightning speed, the new coalition is redefining the term governance to suit its immediate and narrow goals.

In so doing, it is openly contravening commonly accepted principles of governance in parliamentary democracies. The OECD — drawing on the decision of the Council of Europe — has listed 12 principles of good governance to which Israel today adheres only partially, if at all: fair conduct of elections, representation and participation; rule of law; innovation and openness to change; responsiveness; efficiency and effectiveness; openness and transparency; ethical conduct; competence and capacity; sustainability and long-term orientation; sound financial management; human rights, cultural diversity, and social cohesion; and accountability.

Even more striking is the fact that Likud today is blatantly defying its own legacy to Israeli governance: the replacement of the hegemonic norms introduced by Ben-Gurion and his ruling Mapai party through the reinforcement of the judiciary and independent institutions (a professional civil service, free media, vibrant civil society) to counterbalance the political interference practiced by its predecessors. Under the aegis of the most right-wing government in Israel’s history and lacking the consensus enjoyed by the founders of the state, it is now becoming more Mapai than Mapai.

Without the offsetting interaction of politicians and professional civil servants, trust in government — any government — inevitably falters. And without confidence in those in charge of directing public affairs, there cannot be governability: the capacity to secure compliance of state institutions, markets, civil society, and individuals through the exercise of power (the combination of authority backed by the legitimate use of force). Governability is facilitated by voluntary compliance and adherence to the broadly accepted rules of the game embodied in the principles of governance. It is assured through the employment of coercion to ensure order or to enforce submission when there is not consensus on communal norms.

The capacity of the present Israeli government to govern — with its exclusive orientations, theocratic propensities, its rampant politicization of the public sector (as also practiced by its predecessors in recent years), its selective allocation of government resources, its replacement of its own free market principles with the dispersal of handouts to its political partners, its palpable disregard for minority rights and civil liberties, its racist and misogynous predilections, and the kleptocratic record of some of its most prominent ministers — is fast becoming extremely limited. Its initial decisions have unleashed a rising public outcry which is spreading almost daily to a growing number of social groups, increasing its tendency to revert to sanctions or force to achieve its aims.

Without agreement on the terms of governance and a government capable of governing, there can be no democracy. Israel is now undergoing a process of democratic backpedaling which, if it persists, will lead not only to authoritarian rule, but also — even more dangerously — to its complete fragmentation.

The new Netanyahu government believes that it can repeat the mistakes of the past and ignore the experience of other beleaguered regimes and still bring about different results. This is foolhardy, arrogant, and mistaken.

The trajectory it has set in motion is not irreversible. It can be altered not only by the delineation of firm and internationally recognized boundaries, but also by a government committed to core public norms, institutional checks and balances, and concomitant values that enable sustainable governance and hence governability over time. Much of its public is devoted to democratic principles and actively searching for the fortification of those rules of inclusion, equity and equality that can restore trust and hence governability. The way these forces defy unfolding currents and how they forge new understandings that lead them in constructive directions — as they have elsewhere and in the country’s past — will determine Israel’s fate.