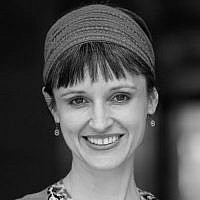 The Blogs
Annie Kantar
Apply for a Blog
Please note that the posts on The Blogs are contributed by third parties. The opinions, facts and any media content in them are presented solely by the authors, and neither The Times of Israel nor its partners assume any responsibility for them. Please contact us in case of abuse. In case of abuse,
Report this post. 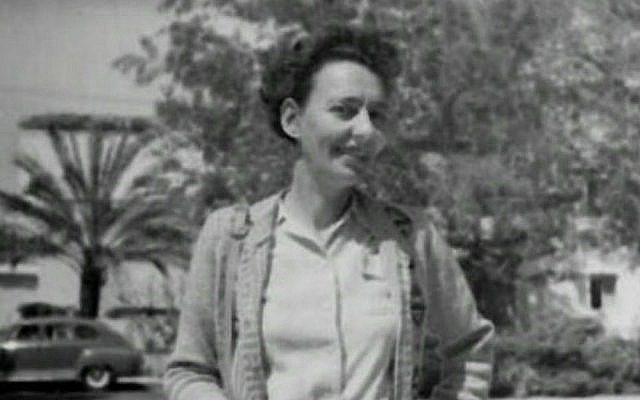 Leah Goldberg, pictured here in 1946, was a prolific writer and poet whose poetry was put to music only after she died (Courtesy The David B. Keidan Collection of Digital Images from the Central Zionist Archives)

As in the past, dozens of books by and about Leah Goldberg—whose one-hundred fourth birthday we commemorate today—will deck the halls of Hebrew Book Week, which kicks off June 3. Her Selected Poems remains one of the best-selling books of poetry in Israel, and with more than four-hundred melodies having been set to her poems, Goldberg’s sonorous and sinuous Hebrew has shaped the way we sing and grieve and write. And yet, her work as a translator—no less impressive, and no less impactful on the contemporary Israeli quotidian—is apt to go unnoticed.

“One chooses a language,” Goldberg would write of her adopted and beloved Hebrew, “the way one chooses a ring.” It’s an odd simile, given the lack of choice most anyone has, or would want to have, in a language—especially if her life’s work were the writing of poems. Goldberg’s childhood correspondences with her friend, Minna Landau, and her early poems, which, from the age of twelve, she insisted on writing in Hebrew, speak for the grit and moxie she must have needed to acquire that shimmering linguistic artifact.

At least in this regard, Goldberg was hardly alone. Together with many other Third and Fourth Aliyah poets, her work gently and ambidextrously helped mold the local literary culture. In subject as well as style, she and her cohorts understood that their writing played a key role in birthing the nascent Hebrew nation. As the cultural elite of the fledgling nation, these modern Hebrew poets were not only expected to develop the Hebrew language, but to develop it from within—among other Jewish writers, and the Hebrew canon as it stood thus far.

Goldberg, as well, heard the call. And yet, the directive toward this Jewish brand of insularity was, well, foreign to her, and she could not follow. As a poet, thinker, and perhaps most of all, as a translator—Goldberg loved the literature and culture of Western Europe, a romance which deepened at the age of nineteen when she was rescued from the dull life of her native Kovno on a scholarship to pursue a Ph.D. at the universities of Berlin and Bonn. There, she encountered for the first time the Romanesque and Gothic churches, the opera houses, and the museums of Western Europe, which she’d visit and revisit for the rest of her life.

And though this background crops up throughout her corpus—which includes nine collections of poetry, three plays, a memoir, three novels, dozens of children’s books, and hundreds of essays—translation satisfied, at least in part, her deep humanistic and aesthetic allegiances. Perhaps because she so agilely crossed genres, it’s easy to forget the formidable and fearless engine of literary translation that she was. Chekhov, Ibsen, Petrarch, Shakespeare, and many other classical and modern writers have her to thank for their proverbial place on the Israeli bookshelf. Her magnum opus, a translation of Tolstoy’s epic War and Peace, remains the authoritative version in Israel to this day.

In carrying the experience of other people, and peoples, into a lucid, living Hebrew, Goldberg not only imported fresh sensibilities into Hebrew culture. She also, along the way, was serving that very nation-building ethos which, at times, seemed at odds with her more universal view. Facing the challenges of transferring another piece of language into Hebrew, Goldberg engaged in the mind- and ear-bending inventiveness that the best literary translation demands. In so doing, she took part in the lengthy and ongoing process that her kind of deep translation makes possible, which is to bring a renewed suppleness and vitality to the language that receives it.

And yet, objections to her undertaking inevitably arose. Lamenting an attitude she later coined as “cultural fascism,” Goldberg recalls in 1952 one of many incidents in which her homage to modern and classical Western literature was derided as “typical…of that stream” which wants a “translated nation.” Ironically, this epithet was uttered during a convening of a committee called “The Council for Higher Culture.” More than likely, the venomous accusation was, in fact, spot-on.

After all, what would a “translated nation” look like? Presumably, it would absorb meanings that it knows have originated elsewhere. It would borrow from another—other peoples, other languages—what it doesn’t yet have. It would be porous. And if it were translating, and translating well, it would listen carefully. It would welcome strangeness, and maybe, even too, the stranger. The proposition may seem dangerous: what one chooses—whether a country, way of life, or language—one also stands to lose. Leah Goldberg, who turned Russian, German, English, French, Italian, Greek and Yiddish into her (now native) Hebrew, saw things differently.

About the Author
Annie Kantar Ben-Hillel directs the English Program at Shalem College in Jerusalem. She is the recipient of an Academy of American Poets Prize and Fulbright Scholarship. Her poems and translations have been published in literary journals such as The American Literary Review, Barrow Street, Literary Imagination, Poetry Daily, Poetry International, Tikkun, and Verse Daily. Her translation of With This Night (University of Texas Press, 2011), the final collection of poetry that Leah Goldberg published during her lifetime, was short-listed for an ALTA Translation Prize.
Related Topics
Related Posts
Comments