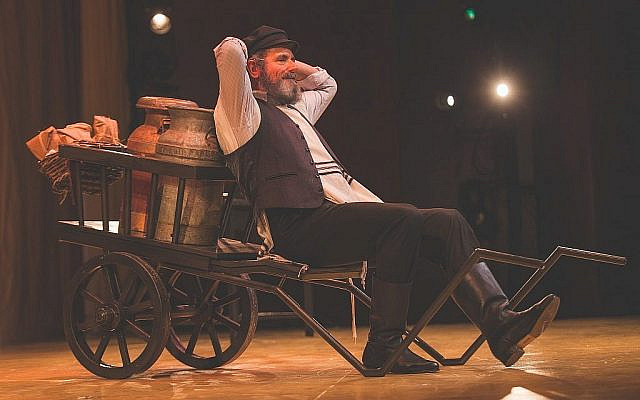 Steven Skybell as Tevye singing 'If I Were a Rich Man' in the National Yiddish Theatre Folksbiene's production of 'Fiddler on the Roof.' (Victor Nechay/ ProperPix.com)

“Well, Anatevka hasn’t been exactly the garden of Eden.

What do we leave? Nothing much, only Anatevka.”

“Our forefathers have been forced out of many, many places on a moment’s notice–maybe that is why we always wear a hat.”

The heartbreaking final scenes of Tevye and the people of Anatevka leaving behind the world, which was everything they knew, capture the tragic reality of exile and migration for Jewish people. The attempt to rationalize and minimize what is being left behind, coupled with the profound shock of displacement, helped generations of American Jews better understand the experience of our forefathers, forced to flee pogroms and persecution, bringing them to America–a land they had not known before. The balance between the irreplaceability of the Shtetel and camaraderie and the belief a better life lies ahead of us has been something Jews have always been forced to contend with.

This profound dichotomy is introduced to us most powerfully in Parshat Lech Lecha.

When we think of the first encounter between God and Abraham, we think of the words, Lech Lecha–” And the Lord said to Abram, “Go forth from your land and from your birthplace and from your father’s house, to the land that I will show you.” (Beresheet 12) We envision this as a trip with the promised land at its end. Once Abraham arrives in Israel, God tells him, “And the Lord appeared to Abram, and He said, “To your seed, I will give this land,” and there he built an altar to the Lord, Who had appeared to him.” It seems like everything has fallen into place.

“And He said to him, “I am the Lord, Who brought you forth from Ur of the Chaldees, to give you this land to inherit it.” (Beresheet 15) Abraham has traveled more than once before.

At the end of Parshat Noach, we are introduced to Abraham and are told:” And Terach took Abram his son and Lot the son of Haran, his grandson, and Sarai his daughter-in-law, the wife of Abram, his son, and they went forth with them from Ur of the Chaldees to go to the land of Canaan, and they came as far as Haran and settled there.”

Nachmanides and Rabbi Shlomo Yitzchaki debate on and on the route and history of Abraham’s journey to the promised land, but all agree that the journey has extended far beyond what we think it was.

It is no surprise then that when God tells Abraham of the downside of His covenant with Abraham, he tells him that his children will be strangers in a strange land.

Rabbi Samson Raphael Hirsh, one of the greatest commentators of the 19th Century, explains that Abraham has become a nation not by sharing a land with someone but by leaving it. This is why his grandchildren will also become a nation by going into exile and realizing that what binds them together is more than a shared land but a shared faith and the spirit of Abraham’s kindness.

This week’s Parsha puts the land of Israel at the epicenter of Abraham’s dreams, hope, aspirations, and destiny; it also puts in the safety measures to let us know that the covenant and family of Abraham transcend time and place. The land of Israel is the heart and center of who we are as a people–but it is not a prerequisite. We are a people of wanderers. We are a people who are bound by faith and fate.

We are blessed to live in a generation like no other. There is Jewish sovereignty and independence in the land of Israel. There is also a great deal of equality, social status, and wealth enjoyed by diaspora Jewry. This dichotomy leads some to romanticize Jewish life in the diaspora. Things are good here. Why think of moving, Aliya, or sending a child to Israel when we enjoy everything we enjoy here? There are even those who romanticize the diasporic experience and seek to abandon our people’s unbreakable connection to Israel. There are also those who, while enjoying life in Israel will write off the diasporic Jewish community. “They are living in Galut!”, “they chose not to come here,” “they will anyways assimilate in another generation or two,” and other expressions ignoring those who do not live in the sovereign land of Israel.

The lesson of this week’s Parsha is that there is a duality to it. The land of Israel is the heart and soul of the Jewish people. We cannot exist without the yearning for Zion, the promised land, and our people’s religious and cultural epicenter. Yet like Abraham, we must know that travel, flexibility, and the ability to be bound by fate that transcends land is a chore strength of the Jewish people.