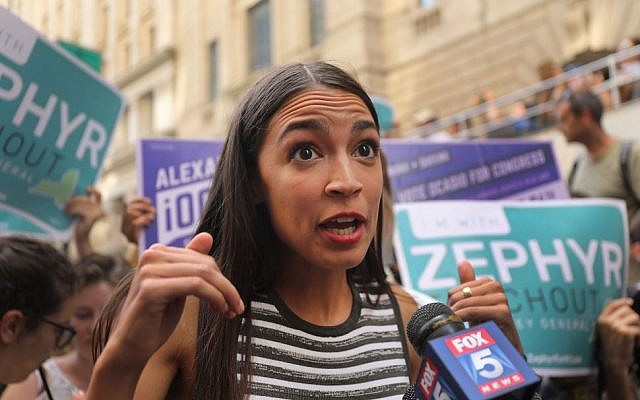 Last spring’s Hamas-led assault on the fence separating Israeli towns from the Gaza Strip threatened to breach Israel’s border, to be sure, but has also threatened to exacerbate growing breaches within the Democratic Party over the Israeli-Palestinian conflict. The worsening tensions between those Democrats who embrace the anti-Israel narrative of an increasingly influential left-leaning faction of the party and those who do not pose serious risks both to Israel and to Democrats’ future, and neither Israel nor those concerned about the party’s ability to recapture the White House know quite what to do about it.

The fact that Hamas, ideologically and militarily committed to Israel’s annihilation, has earned its designation as a terrorist enterprise and its reputation for bloody hands and for ripping off those over whom it rules has never mattered much to Israel’s critics on the left. Last spring Hamas exhorted its subjects to cross into Israel to kill civilians, which, given its elaborate system of underground tunnels designed for that purpose, is not a joke.

Masses of Gazans did as they were told, advancing on Israel’s border under cover of blinding smoke from strategically placed burning tires, throwing grenades and Molotov cocktails, planting explosives and launching “fire kites” packed with incendiary devices that succeeded in burning thousands of acres of Israeli farmland, orchards and forests. In some cases they did manage to breach the border fence. None of this made much difference to the left, which, without providing any helpful suggestions on precisely how Israel was supposed to stop this, duly recited the usual line that Israel was guilty of human rights violations. Even Hamas’ public proclamation that most of those killed by Israel Defense Forces attempting to protect the border were Hamas members did not give Israel’s critics much pause.

At home, Democrats have turned an increasingly cold shoulder to Israel. A Pew poll earlier this year reaffirmed what other surveys have found: The percentage of Democrats self-identifying as “liberal” who support Israel is plunging. There are numerous reasons for this. The vitriol directed by the Obama White House against Israeli Prime Minister Benjamin Netanyahu, which grew downright toxic during the Iranian nuclear deal debate, took its toll. Donald Trump’s warm embrace of Israel, a welcome relief for Netanyahu’s government, has triggered a stampede toward the exits on Israel by Democrats, who are all but unanimous in their detestation of Trump.

These divisions erupted into public view when the Hamas-orchestrated border clashes were organized to coincide with the Trump administration’s opening of a United States embassy in Jerusalem. Sen. Bernie Sanders, the standard-bearer for the Democratic left, accused Israel of “terrible actions” in defending its border. New Democratic superstar Alexandria Ocasio-Cortez blamed Israel for a “massacre.” When pressed in an interview to defend her indictment of Israel, Ocasio-Cortez backpedaled, vapidly. “I am not the expert at geopolitics on this issue,” she conceded. “I may not use the right words, [but] I know this is an intense issue.”

The generations-long conflict is indeed “an intense issue.” It matters not only whether the crop of activists and organizers who are providing so much positive energy to the Democratic Party use “the right words” when discussing it, but that they know what they are talking about.

“Democratic base voters are more hostile to Israel than at any point in decades,” Brooklyn College professor K.C. Johnson told the JTA recently. “As the 2020 presidential primaries take shape, it’s easy to imagine more ideologically flexible candidates … sharply criticizing Israel to boost their standing with progressive activists.” Democrats’ increasingly anti-Israel tack hurts Israel, which depends on bipartisan American support for its national security. But it also hurts Democrats, who can ill afford to disgust pro-Israel Democrats and independents in 2020. The trend is not a pretty one for either, and it is one that will take some boldness and care both by Israel’s backers and by Democratic leaders to reverse.