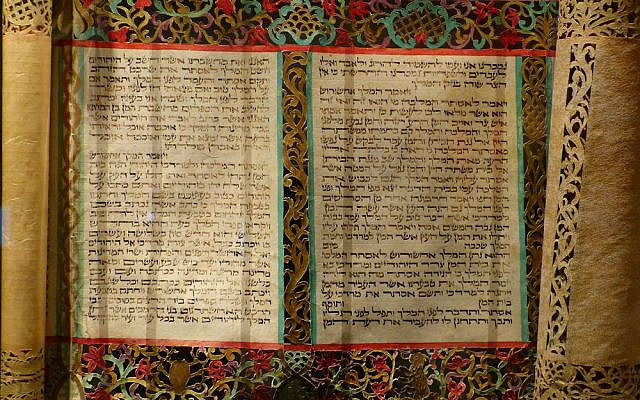 Part of an Esther scroll of the collection of Sammlung Braginsky. (Wikipedia)

On the face of it, the Book of Esther hardly paints a positive picture of Jewish practice. Esther and Mordechai are named after the two most important “gods” in Babylon: Ishtar and Marduk. The entire book does not mention God’s name (Yehova) even once — as if the “miracle” of saving the Jews is to be credited to our two “heroes” and not to the Almighty. Finally, Esther voluntarily (perhaps at Mordechai’s cajoling) joins a beauty contest in which she could end up married to a Gentile king, one who eliminated his past wife for not showing up naked at the banquet!!

Why, then, was this book included in the biblical canon? The question becomes even more acute when we compare Purim to the other minor holiday in the Jewish calendar: Hanukkah. It too has a Book — indeed two: the Book of Maccabees 1 and 2. And yet, despite the heroism found therein — returning national sovereignty to the Jewish people in their land — that book is NOT included in the Hebrew Bible whereas Megillat Esther is.

The answer to this conundrum lies in the “when” of biblical canonization. The Hebrew Bible reached its final form sometime in the mid-to-late 2nd century CE – after lengthy discussions and debates among the rabbis in Palestine (the name given to Israel by the conquering Romans). Many of the Bible’s books (almost certainly the Five Books of Moses and the Judges, Kings, and Prophets) were “canonized” earlier than that, but several of the Chronicles (Ketuvim) books (Esther, Song of Songs, etc.) were still being debated in the 2nd century CE.

What was the Jewish situation at that time? Total decimation of Jewish residency in the Land of Israel after the destruction of the Second Temple (68 CE) and then the disastrous Bar-Kokhba Revolt (132-135 CE). In both cases (the second worse than the first), hundreds of thousands of Jews were killed, exiled, and/or enslaved. Indeed, these two events taken together constituted the worst demographic catastrophe in all of Jewish history until the Holocaust.

What did the Rabbis decide after these calamities? Henceforth, Jews would no longer fight militarily against the powers that be to regain sovereignty. Indeed, by then the vast majority of Jews were living outside the Land: Egypt, Rome, and especially Babylonia. The new pressing challenge: how to survive in Diaspora?

It is from this perspective that we can understand the Rabbis’ otherwise “strange” decision to include the Book of Esther and not the Book of Maccabees. One doesn’t have to look far to see the latter decision: the Haftorah reading on the Sabbath of Hanukkah ends with the line: “Not by Might, and not through Arms, but rather through Spirit, says the Lord.” In simple terms, no longer will Jews fight; prayer and scholarship will carry the day. If so, then the military heroism of Hanukkah provides the wrong message and the Book of Maccabees shouldn’t be read during the holiday, so there’s no need (even a danger!) in including that book in the biblical canon. In fact, the Rabbis transmuted the holiday to one of the Temple’s “miracle of lights” re-dedication — something not even mentioned in the Book of Maccabees!

What about the Book of Esther? Here was the recipe for the new socio-political environment wherein most Jews found themselves: exile. How to survive in such a hostile situation? The answer: through subterfuge, manipulation, indirectness. Even Esther’s name suggests this, for in Hebrew it is a homonym of “Hester” (“hidden”), precisely the thing she performed on her husband King Ahasuerus — hiding her Jewish origins (Esther is Judaism’s first crypto-Jew!). If Vashti was punished for directly refusing the king’s demand, Esther manages to get her way by indirection, e.g., inviting the king and Haman to two lavish parties and only springing the surprise when her husband was sufficiently curious as to what was really going on here (asking himself: why was Haman invited twice??).

Antisemitism will be found everywhere, the Book of Esther suggests, but in a position of relative weakness the Jews have to muster all their cunning to avoid destruction. The government itself might not be antisemitic (Ahasuerus wasn’t; he was lied to and manipulated by Haman), but the danger exists nonetheless. Indeed, Haman is basically the first biblical villain to be resolutely antisemitic; previous enemies of the Israelites and Jews acted towards them as they would to any people they wished to loot (Amalek), defend themselves against conquest (the Canaanite nations), or conquer (Assyria; Babylonia).

Here too, the timing of the rabbinical decision to include the Book of Esther is illuminating: it happens during the century when Christianity starts to become truly antisemitic in a theological sense — the first ever to view the Jews as an incorrigible, misguided “enemy.” The Romans merely wanted to subdue Judea as they had done to many other peoples, nothing more and nothing less. Christianity, however, inaugurated a new, more insidious era in Jewish-Gentile relations. The rabbis chose the Book of Esther to show how to cleverly deal with such a novel, mortal threat — despite that book not being the epitome of Jewish values.

National self-preservation above all else. Then as now.