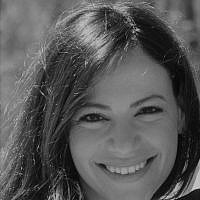 The Blogs
Hanin Karawani Khoury
Apply for a Blog
Advertisement
Please note that the posts on The Blogs are contributed by third parties. The opinions, facts and any media content in them are presented solely by the authors, and neither The Times of Israel nor its partners assume any responsibility for them. Please contact us in case of abuse. In case of abuse,
Report this post. 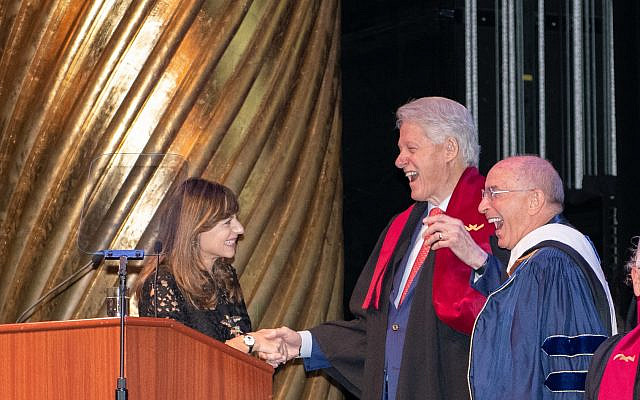 You can’t get more visible than standing on stage next to a former president.

Yet there I was in front of hundreds of people — many of whom were part of the elite echelons of academia and New York City society — getting ready to introduce President Bill Clinton before he received an honorary doctorate from the University of Haifa, last month.

Due to a last-minute change of plans, I was told that President Cinton shouldn’t come on the podium just yet. Imagine my horror when after I concluded my remarks, the president of the University of Haifa, Prof. Ron Robin, ushered Clinton to the podium, unaware of the last-minute instruction.

My instincts kicked in and instead of panicking, I shook the president’s hand, said “Mabruk, Mr. President!” and firmly asked him to please have his seat. He shot back jokingly, “I’m only here to take orders.” After the ceremony, Clinton told me he was tickled by the incident and found the ceremony itself refreshing.

I don’t know where I found it within myself to take charge during this technological glitch with one of the most famous men in the world in front of me —but looking back, I think my professional and personal life may have equipped me with the tools to conquer such a moment.

When President Robin asked me to moderate the event, many colleagues approached me and asked why — out of the dozens of worthy candidates — I was chosen. I assume there were obvious reasons. I’m an Arab. I’m a woman. I’m known for my hard work and innovative research. I’m also young — certainly the youngest person on that stage.

That said, when I began teaching at University of Haifa five years ago, I never would have imagined taking part in such a celebration of excellence. Being in that room, brushing elbows with figures who could dramatically enhance my future as well as that of the university, was an honor and a privilege.

But most of all, as a member of a minority population in Israel, it felt great to be seen.

I certainly didn’t feel seen on the morning of Nov. 2 when Israel’s election results came in. Yet my colleagues at Haifa University, which has the largest proportion of Arab students among Israel’s major research universities, prove to me day in and day out that not only am I seen but I’m appreciated.

As for Clinton — who was honored for his groundbreaking work at the Clinton Foundation and his tireless dedication to peace in the region — he’s one of the few presidents whose legacy impacted me on a personal level.

Although I was only in the third grade at the time, I remember him shaking hands with Yitzchak Rabin and Yasser Arafat and cementing the Oslo Accords. Peace, which always seemed so elusive, then felt like it was actually possible.

Of course, as the years marched on, we know the reality on the ground didn’t match the vision that many of us wished for. I don’t know when genuine peace will take hold, but I do know I have that peace within me.

And, while working alongside my Jewish and Arab students, I know they have it in them too. I hope to teach them what we can all do if we work together, and there’s nothing to be gained from standing in the corner.

People who don’t vie for their slice of the pie don’t get to taste the limelight — they don’t even get invited into the room. So, I hope the success of the event featuring Clinton sends a message to not only make sure to be seen but also to be vocal on the issues that matter the most to you.

The Israeli election won’t get me down, because I know my colleagues, too, have that peace inside of them.

Shaking Clinton’s hand and making him laugh makes me eager for my next transformative moment. For now, I’ll continue to work hard and dedicate myself to the University of Haifa. Located on top of Mount Carmel, by the shores of the eastern basin of the Mediterranean Sea, it’s an institution that prides itself on promoting coexistence. It is arguably the only place on earth where Arabs and Jews coexist.