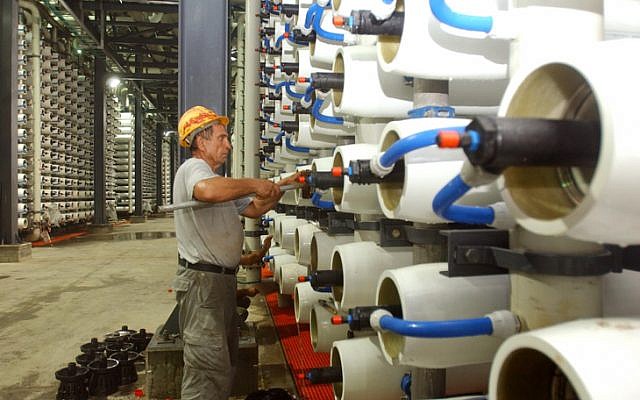 A desalination plant on the Mediterranean Sea.(photo credit: Edi Israel/Flash90)

Israeli children are taught at a very young age that every drop of water counts. Kindergarten teachers instruct their toddlers to carefully brush their teeth and take showers using as little water as possible.

By the time these children become adults, water conservation has become an ingrained principle. Television commercials emphasize the ongoing need to be water conscious. Every time there is a drop in the water level of the Kinneret, the biblical Sea of Galilee which has been the source of most of the country’s fresh water, the national mood responds accordingly.

Although prudent use of water is still of vital importance, Israel no longer has a water shortage. In fact, according to Let There Be Water (Thomas Dunne Books, September 2015) by Seth M. Siegel, Israel not only has enough water for its growing population, but the solutions the country developed can serve as an example for drought inflicted countries.

Israel has a water surplus 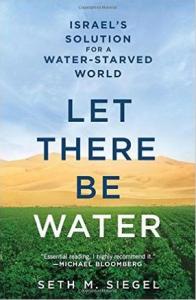 “Israel not only doesn’t have a water crisis, it has a water surplus. It even exports water to some of its neighbors,” the author writes, referring to agreements with the Palestinian Authority and Jordan.

Other countries like Australia and Singapore also take water issues seriously, the author notes, as do the states of Nevada and Arizona. Other places, especially California and Texas, have not yet resolved a worsening crisis that could have serious repercussions on their populations.

The underlying principle of this book is that Israel can help countries and states suffering from increasingly perilous droughts solve their problems and ensure their future water supplies.

As if to prove this point, just last month Los Angeles County signed an agreement with Israel to study Israeli water technology. In San Diego, America’s biggest desalination plant is nearing completion; it is being built by Israel Desalination Enterprises.

It wasn’t always so. Let There Be Water follows the development of Israel’s water technology from the days when Prime Minister David Ben-Gurion pushed for settling the Negev. The construction of the National Water Carrier is included in a detailed report as well as early Israeli efforts to introduce desalination plants. It is surprising to read the accounts of meetings between U.S. President Lyndon B. Johnson and Israeli Prime Minister Levi Eshkol in the 1960s when Johnson repeatedly showed interest in desalination technology.

How did Israel’s water surplus come about? Siegel lists the many factors that have contributed to this new reality: drip irrigation; comprehensive treatment of wastewater; charging consumers with the true price of water usage; desalination; and of course a water-conservation mentality. As an example, the book emphasizes how treated wastewater provides most of the irrigation needed for Israeli agriculture.

Productive use of treated wastewater

“Nothing Israel is doing in capturing such a large amount of its sewage for treatment is very different than other advanced countries around the world,” Mekorot director of wastewater and reused water Avi Aharoni says, as quoted in the book. “What is different, what is extraordinary, is the degree to which Israel then takes that treated water and makes productive use of it.”

The research Siegel put into this book is meticulous and exhaustive. He interviewed hundreds of experts in Israeli water-related industries; university professors; biologists; authors; and even former prime minister Shimon Peres.

If there is anything wrong with this very readable book it is the sense that Israel’s water management sounds almost too good to be true, yet mistakes made along the way are also detailed. Readers will join the author in hoping that solutions developed in Israel will serve as a light unto the nations of a water-starved world.

Seth M. Siegel, author of Let There Be Water, is a lawyer, activist, writer, and successful serial entrepreneur. His essays on water and other policy issues have appeared in The New York Times, The Wall Street Journal, The Los Angeles Times, and in leading publications in Europe and Asia. Siegel is married and lives in New York City.

About the Author
Ellis Shuman made aliya to Jerusalem as a teenager, served in the IDF, was a founding member of a kibbutz, and now lives on Moshav Neve Ilan. Ellis is the author of ‘The Burgas Affair’ – a crime thriller set in Israel and Bulgaria; ‘Valley of Thracians’ - a suspense novel set in Bulgaria; and 'The Virtual Kibbutz' - a collection of short stories. His writing has appeared in The Times of Israel, The Huffington Post, The Jerusalem Post, Israel Insider, and on a wide range of Internet websites. Ellis lived with his wife for two years in Bulgaria, and blogs regularly about Israel, Bulgaria, books, and writing.
Related Topics
Related Posts
Ellis Shuman
Comments