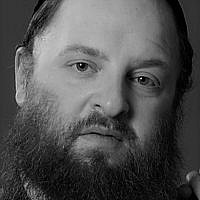 The Blogs
Menashe Lustig
Apply for a Blog
Please note that the posts on The Blogs are contributed by third parties. The opinions, facts and any media content in them are presented solely by the authors, and neither The Times of Israel nor its partners assume any responsibility for them. Please contact us in case of abuse. In case of abuse,
Report this post.

Recently, the non-religious world began to recognize my name, Menashe Lustig, because of a film that is now in theaters around the world called Menashe, based on my life in the last decade. From the film, viewers learn that I have experienced great hardship in my life; some that many people don’t experience until they are elderly and because of this, I have a different outlook than many people do on the world we live in.

My hardships have changed me and opened myself to giving to others and trying to make the world a better place. Now, before the high holidays I have been reflecting on my life, my community and the world we live in.

On one hand, I am so pleased with all the miracles and material goods that I and many in the United States benefit from every day. However, on the other hand, unfortunately, every day I hear such bitter stories both on a personal level and in the news.

For example, a good friend who recently just laughed with me, died of suffocation in a sudden fire in the middle of the night. In addition, a very close friend who lives abroad was recently caught in a wave of terror.

When I hear these heartbreaking stories it bothers me that so many people aren’t grateful for what they have. They talk about nonsense and news that has no substance and are not interested in world unity and spreading love in the world.

When I was blessed with a son a decade ago, this was not the type of world I envisioned he would grow up in. As I mentioned earlier, throughout my adult life things have not always gone for me as well as I wanted them to go. One of the hardships I have had to encounter was becoming a widower at an early age.

In my community of observant Jews, everyone feels that a child who does not have a home with his mother and father as a model for emulation and stability, will end up as an unstable adult. Unfortunately, there are many children in this world who are not able to grow up in this nurturing environment. We all need stability. Like they say in Fiddler on the Roof, “Without our traditions, our lives would be as shaky as a fiddler on the roof.”

In fact, our world needs traditions and stability. We need to give each other the feeling of living together in unity and peace which has been a tradition in the United States.

I remember when I was very young that there were places in New York that everyone knew were dangerous places, even in the middle of the day (like Harlem). Today, thanks to education and the aspiration for unity and love, they are safer better places. However, there are still so many places that are unsafe in the world. Many children grow up in crime infested areas, we now have to worry about nuclear war with Korea and our country has sadly become so terribly divided.

So what do the Jews do when we are afraid or worried? We pray.

There is a Jewish organization called Dirshu, one of the largest educational organizations in the world. Over the years many of my friends have studied with their program. They care that we live in a world of peace.

On September 15, their outreach division called Acheinu, asked that Jews unite to pray for a peaceful world. They called it: A Day of Jewish Unity. I prayed on that day, so did many others. In fact, Jews across the world prayed in synagogues, in offices, in classrooms, in homes and around 10,000 came to pray at the Western Wall. However, all of us must continue to pray.

The Jewish high holidays are soon upon us and this is a time of introspection. It is time to think about what we have done right or wrong throughout the year and how we can ask G-d for forgiveness and also think how we can improve ourselves in the coming year.

However, perhaps it would not be a bad idea if during September we all thought about how we could improve our world.

On a personal note, for me the holidays are a lonely time and I am sure the same could be said for many other Jews who live alone. There is no substitute to having a family to share life with, but as I prayed on September 15th for a day of unity and peace, I will pray on Rosh Hashanah that next year, all of us who are lonely have lives that will change for the better.

Thinking back to the Day of Jewish Unity, how can we unify our world? Should we reach out to people on the other side politically? Should we as Jews recognize that we are all one big family and even though we might not agree on everything we are still a family? Should we as Americans realize that we are strongest and best able to handle foreign aggression if we are united? Maybe one day a “Day of Jewish Unity” will expand to being “A Day of American Unity” or a “Day of Democracies in Unity”. I think that would be a beautiful thing.

And may I end this piece now with a prayer, Great G-d, Master of the Universe, give us life and peace in the world, and it will be a good and sweet year, without the evil eye, without envy and hatred, only peace and truth. Amen.

About the Author
Menashe Lustig is an observant Jew and the star of the film Menashe, based on his life.
Related Topics
Related Posts
Comments