I recently wrote about my decade-long exchange of letters with my paternal grandfather, Edwin in Miami Beach. At the same time in the 1980s, I was also writing to his younger sister Pearl, who lived in Los Angeles. While I had very little contact with my father’s family as a kid after my parents split, Pearl did keep in touch. For example, she made a determined effort to make me aware of my Jewish heritage, which faded in my memory while growing up on the Texas-Mexico border. Pearl sent me books, newspaper clippings, the September-October pages from a 1973 Jewish calendar and pamphlets on Judaism. She never gave up on restoring yiddishkeit to my neshama.

Her tenacious streak might have been a response to illness. The story I heard was that Pearl contracted tuberculosis and overcame it at a sanitarium in Colorado, known in the last century as the healthy place to go for treatment.

That TB experience must have made her an enthusiast for health foods. She regularly sent date loaves and other hearty fare to our home in Mission, Texas. Ever polite, I’d thank her, and she’d promptly send another package of health foods and Jewish materials.

In her letters between 1981 and 1986, she delighted in our contacts and took a keen interest in my work, dating, eating and cultural life in New York, where I had moved after college. With no children of her own, Pearl aimed her laser beam of lifestyle guidance at me.

She typed her letters on folded pages so they read like a little book. Her jazz-like riffs on every scrap of personal detail I sent her still ring across the decades. She had a remarkable written voice and range of interests that I can envision in 2020 terms as the makings as a podcast sensation. In her first letter in 1981, she wrote, “Do please keep me informed about Miss Klein, and how is your romance with her progressing?” [Actually, that was Miss Kaufmann.] Later she wrote, “Someday, from that innumerable covey of bright young females, you may settle down with one (I hope the brightest one).”

After I told her about my 1982 trip to Israel, she wrote,

“Hearing from you was a most pleasant surprise. And to learn especially that you had gone to Israel. Aha, she says: you must be travelling in my very own footsteps. Although I have never been there in the flesh, I have been there from the very beginning via HENRIETTA SZOLD’S book of her life. Israel began to emerge from the rocky, rough terrain it was when this great woman first saw what was destined to be a Jewish homeland. And she was greatly responsible. With her great love for a stricken humanity: the wandering thousands of homeless Jewish children haunted by Hitler and bringing them by devious and other hidden methods to the barren land, she began the systems of education. . . well, I could go on and on, but please obtain this book. It may even influence your present rendition of what you observed when you visited there. 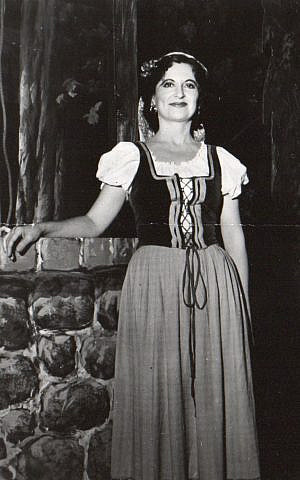 Pearl in “Elixer of Love,” in Miami.

Still, I could raise her hackles if I crossed certain lines. Consider the time I mentioned a concert I enjoyed:

“I am happiest when you mention attendance at operatic or classical music performances. And who and what is this GRATEFUL DEAD? If this is the usual waste of time, otherwise known as ROCK, or JUNK, or whatever, as indeed it all amounts to the same waste of time. O, woe is me! From the sublime of great music to the banal nothingness of ROCK OR WHATEVER.”

Then she segued from the Dead to a plea to:

Avoid junk food. Refined anything . . . like sugar. The white deadly stuff deprived of all its powerful nutritional aids Nature endows the sugar-cane with. Only this avaricious idiot, called Modern-Man, persists in avoiding the good, for the bad. And all the manufacturers are in this category. Now, having delivered my lectures, I must refrain from further comment, and anticipate hearing from you, dear, dear nephew, much love from Aunt Pearl.

Pearl was on to something with her healthy food and lifestyle urgency; if only the Grateful Dead’s Jerry Garcia would have heeded her advice to avoid “the white deadly stuff” in its culinary and chemical forms, along with heroin and other drugs.

The last letter was written in December 1985, where she brought me up to date on a documentary project about the connections between American Indians and Jews, and her poetry. She mentioned that her nephew Zale Kessler —an actor who had roles in four Mel Brooks movies, including The Producers—would appear in a musical in Washington soon. “He really is a wonderful performer, ‘to the manner born’ suits him.”

Her thoughts reflected the give-and-take of our letters and the far-flung family. I had mentioned that my brother in Houston welcomed his first son in October 1985, pushing the Wallach name into another generation. The news inspired Pearl to connect a lot of family members’ creative impulses in looking ahead to the new addition:

Take care, now and write to me again, soon. Glad I am to learn something about your brother. I hope the new baby will inherit your talent and something of Zale’s with a wee bit of mine! With much love and pray for me, too, Aunt Pearl.

Looking back from 35 years later, that last letter is thought provoking. “Pray for me, too” suggests health concerns. Also, the letter’s return address was no longer North Edgemont Street in LaLa Land, but Leonard Drive in North Miami Beach. She wrote, “I have moved here where my three sisters live to avoid so much of the sterility I met with.” The sisters were Florence, Rose and Frieda.

What’s puzzling is, she mentions her sisters but says nothing about my grandfather in Miami Beach. Likewise, my grandfather never mentioned Pearl or his other sisters, other than when he sent Pearl my article about Israel. What were the dynamics of five 80-something siblings living within miles of each other in the Miami area? There must be a backstory in their relationships that I don’t know now but am curious to learn about.

I have no more letters from Pearl. I went on to exchange letters with the youngest of the siblings, Florence. I met her at an afternoon family reunion in 2004 at her granddaughter’s apartment in New York. She enthralled us with family stories (such as escapes from rampaging Cossacks) and memories of her parents, who were born in 1870s Ukraine and lived into 1960s St. Louis. Florence herself lived to be 100.

What an immense span of history these people saw; I’m glad I knew something about some of them, Edwin, Pearl and Florence, from a family of seven siblings whose lives spanned from 1895 to 2015. I hope I can be that cranky old guy who members of the newest generation of Wallachs want to check in with. I’d tell them about how Aunt Pearl in LA staunchly encouraged me to be Jewish, and what she thought about the time I saw the Grateful Dead.

Pearl always spoke her mind, straight up—but not on the rocks or whatever. 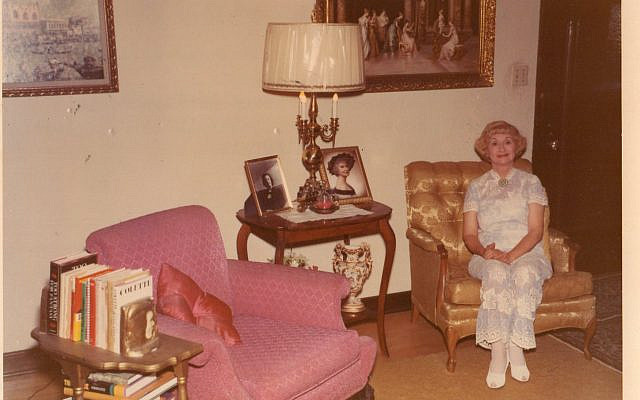 Typed on the back: “Photo I treasure: Sister Rose on table, other photo, of me, taken in 1960, before I came to California.”
About the Author
Van "Ze'ev" Wallach is a writer in Westchester County, NY. A native of Mission, Texas, he holds an economics degree from Princeton University. His work as a journalist appeared in Advertising Age, the New York Post, Venture, The Journal of Commerce, Newsday, Video Store, the Hollywood Reporter, and the Jewish Daily Forward. A language buff, Van has studied Spanish, Portuguese, Russian, Yiddish and Hebrew, although he can’t speak any of them. He is the author of "A Kosher Dating Odyssey." He is a budding performer at open-mic events.
Related Topics
Related Posts
Comments