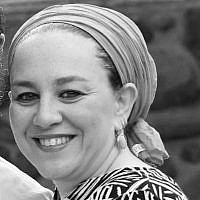 “Are you a Zionist?”

I was asked this by a family friend when I told her I was making aliyah at the ripe old age of 21. Single. Naive. Passionate. Poor. And Jewish. So therefore, I qualified for aliyah.

And then I made aliyah, having no idea if I was a Zionist.

Over the years I played with many titles and religious flavors in describing myself: Orthodox, religious Zionist, Modern Orthodox, chasidish-ish, chasidish Zionist, ultra frum Zionist, lover of Israel but not Zionistic, Tzioni, Dati Leumi, Torani, Modern Orthodox machmir…. The list can go on forever. I kept trying to figure out if my clothes made me a Zionist or not? My home address? My affiliations? Or perhaps… I soon figured out… it should actually depend on my beliefs. And that is when I stopped caring about everything I was telling the world externally and instead tried to tune into what my beliefs were internally.

After moving nine times in eight years, covering a very (!!!) wide spectrum of religiosity and neighborhoods, I suddenly find myself today living in Alon Shvut in Gush Etzion. The Etzion Bloc. Judea. Over the non existent green line. But not the West Bank. Not occupied territories. Not shtachim. Simply, home. An extension of Jerusalem if you must.

A month after living in this beautiful yishuv, I gave an old man a tremp (a ride). When he entered my car, instead of saying hello, thank you or not talking, what most trempers do, he asked me (almost shouting!), “What mitzvah is this you are doing now?”

I smiled. It’s easier than cooking a shabbat meal I suppose.

He asked me my name and was surprised he didn’t know me. I said I just moved in. He then started telling me, in a fashion that seemed like a frantic display of one imaginative fact after the other, that he started Kfar Etzion and Alon Shvut (which was starting Gush Etzion), started Har Etzion yeshiva, started Ofra and the entire Givat Binyamin region and not only that, he found the Western Wall in the 1967 war.

Uh-huh. Right. OK crazy guy, get out of my car!

I must have given him a surprised look because he then recited the only two words of English he knew, “Like Dreamers,” stating that it is the name of the book that was written about him and some others.

So I read the book. And everything he had said in my car was true. Yes, Yoel Bin-Nun had been in my car!

“Like Dreamers” infused me with pride. It soaked me with love for my land, especially this “territory” land. Reading the book helped me immerse my entire being in a space of respect, jealousy, awe and admiration for the astonishing self sacrifice Yoel, among others like him, subjected themselves to. Reading about Hanan Porat and his hunger strikes, the lack of water and food, the uncertainty of driving to Ofra through Ramallah or to Kfar Etzion through Beit Lechem. How they dreamed, stood their ground, worked the land, protested against whomever protested them (including the government) and didn’t give up.

As I was reading the book, everything around me looked different. The trees, Route 60, the soldiers standing at Tzomet HaGush, and especially the homes. Thousands and thousands of red roofed homes spread across this beautiful section of our homeland. Bat Ayin, Alon Shvut, Kfar Tzion, Efrat and it’s three million sections, Neve Daniel, Elazar…These places started singing to me! Singing songs of glory, redemption, celebration, victory and autonomy.

I literally got on a high from this book. When I returned it to my friend, I half jokingly mentioned how my next book had to be “The Prime Ministers”. Next thing I knew it, I was walking out of her house with it in my hands.

It’s a huge book, as anyone could testify, and I could not put it down. Not only did I feel I walked through history and time capsules, I actually felt I was in President Johnson’s Texas ranch, the White House, the Knesset, at Entebbe’s rescue mission, the first Lebanon war, and in the presence of PM Levy Eshkol, PM Golda Meir, PM Yitzhak Rabin and my personal favorite PM Menachem Begin. I had conversations with them, understood their difficult decisions, cried with them, fought wars with them, debated in the Knesset with them, attended fallen soldiers funerals with them and literally traveled with them through a dimension of space and time that could only bring together all these time periods in one way. What brought all four of them, and myself, standing in the same place was that commitment to Israel is not time bound, it’s a constant presence of passion, beliefs, and truth. History is in the present, especially in Israel, and I felt their stories were the stories of today.

Suddenly “Like Dreamers,” which delves into the lives of selected paratroopers from the 67 war, became part one to “Prime Ministers”; which for me was part two. My depth and sincere love for this country just burst inside of me.

My love for Israel became an organic and orgasmic burst of appreciation. PM Begin literally taught me, like a teacher, that we don’t need anyone to give us acknowledgement of our rights to this land; it is our land. He taught me we don’t compromise on what’s ours, we don’t claim victorious on what’s ours, we don’t let go, slack off, neglect or annex land that is ours. Why? Because it’s ours. It’s been ours since G-d said so.

My Zionism has taken shape. It’s still not about secular liberalism. It’s not about an ethnic group, an actual piece of land (“Why not Uganda?” said Herzl at the end of his fight for land), and it’s not about removing G-d out of the picture. It’s very much about G-d and Him giving us gifts. The gift of life, the Torah, mitzvot, the ability to become close to Him, the gift of love for one another, and the gift of this land.

I still don’t know what the word Zionist means, and for each person in connotes something else, but I can assure you, I am a deep lover and believer of this land.

About the Author
Sarah Bechor is a freelance writer in addition to her full-time job at United Hatzalah. She made Aliyah in 2007 and now lives with her husband and children in Gush Etzion.
Related Topics
Related Posts
Sarah Bechor
Comments