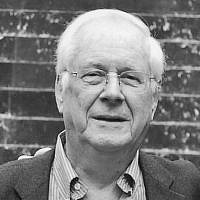 The Blogs
Asher Weill
Apply for a Blog
Advertisement
Please note that the posts on The Blogs are contributed by third parties. The opinions, facts and any media content in them are presented solely by the authors, and neither The Times of Israel nor its partners assume any responsibility for them. Please contact us in case of abuse. In case of abuse,
Report this post.

Kazan, to paraphrase Winston Churchill on Russia, is at first glance — a riddle, wrapped in a mystery, inside an enigma, in a way that is still very much true of Russia in general, and Kazan no less so. The city of 1.2 million people, 800 kilometers east of Moscow, is capital of the Republic of Tatarstan (3.8 million) and is situated on the confluence of the Volga and Kazanka Rivers (some authorities maintain that its name derives from the river) about half way on the Volga’s journey to the Black Sea. Its wide boulevards are lined with attractive modern buildings in a riot of different architectural styles, juxtaposed with Khrushchev-cum-Ceausescu era railway apartment blocks. But the city seems to lack all homogeneity or overall design. It is spotlessly clean and well cared for and a statue of Lenin looks benevolently on from a main square (rare enough in today’s Russia). Its crowning glory is the Kazan Kremlin, in the center of which is the monumental and ornate modern Qolsharif Mosque (on the site of a previous mosque that was destroyed by the Communists), with five minarets in a riot of turquoise and white in flamboyant taste and impressive in its sheer exuberance. It is one of the largest mosques in Russia.

The city has important cultural connotations: Tolstoy, Maxim Gorky and Pushkin all lived or wrote here at some time in their lives. Feodor Chaliapin (1873-1938), perhaps the world’s greatest operatic basso profundo, was born here. Gorky Street has no fewer than four museums along its length.

Kazan has been officially recognized as the “Third Capital of Russia,” after Moscow and St. Petersburg, and is the sports capital of the country, having recently hosted the FINA World Swimming Championships, and hosting the FIFA World Cup in 2018. More important, perhaps, is the fact that, historically, Tatarstan in general and Kazan in particular, has been noted for its tolerance and the peaceful coexistence of the more than 170 ethnic strands and eight national groups that make up its population — some 56 percent are Muslim and 40 percent Russian Orthodox, with a sprinkling of Roman Catholics, Protestants…and 10,000 Jews.

We are here for a meeting of Limmud FSU (former Soviet Union) taking place in Kazan for the first time, but before the proceedings get underway, we are participating in an inter-faith dialogue. This event has been planned by Limmud to coincide with a festival of Jewish music, the rededication of the local 100 year-old synagogue and a convention of Chabad, which has brought some 60 shluchim (Chabad emissaries) to the city from all corners of Russia for their yearly meeting.

The inter-faith dialogue has been arranged by Limmud FSU as part of its mission to support Jewish identity and education among young Russian-speaking Jews, in cooperation with the government of Tatarstan and the local Jewish community.

This dialogue is rare inasmuch as it is being attended by leading clerics of the Muslim community, the Russian Orthodox church, the Roman Catholic Church, the Chief Rabbi of Russia, Berel Lazar, the Chief Rabbi of Tatarstan, Yosef Gorelik, together with Julius Meinl, President of the Euro-Asian Jewish Congress and two prominent rabbis from Israel, Rabbi David Rosen, of the American Jewish Committee and former Chief Rabbi of Ireland, and Rabbi Menachem Hacohen, a former member of the Knesset, Rabbi of the Moshav Movement, and former Chief Rabbi of Romania. The dialogue was co-chaired by Chaim Chesler, founder of Limmud FSU, together with Alexander Terentiev, director of the Bureau of the President of Tatarstan.

Rabbi Lazar pointed out that the meeting was not simply of local concern, but had worldwide significance. “National identity is important and it is the right of every person to freedom of thought and expression. When one recognizes the right of the other to freedom of expression, one can understand and appreciate him. Kazan is an embodiment of this virtue.”

Predictably, all the speakers stressed the importance of inter-faith dialogue and peaceful coexistence “among all the sons of Ibrahim,” in the words of Kamil Hazrat Semigulin, the Grand Mufti of Tatarstan. Less predictable perhaps, were his outspoken expressions of outrage against the actions of ISIS. “ISIS is a satanic sect: there is nothing about it in Muslim belief. These people are not men but animals. The foundation stone of Islam is love. The unimaginable cruelty of these people is fundamentally in opposition to Islam. Christians have been expelled, priceless works of world civilization destroyed. We all pray to the same God and believe in the same prophets. True Islam is not opposed to other faiths.”

Bishop Vladimir Samoilenko, Metropolitan of the Russian Orthodox Church, pointed out that “throughout history, Christianity, Islam and Judaism have reflected the same moral identity under all circumstances and at all times. Persecution of minorities no longer exists in Russia. That is why it is incumbent on all religious leaders to convey the message of respect for the other which has proved so possible here in Kazan.”

However, for the bishop, “persecution of minorities” seemed to have one notable exception. Not unexpectedly, given the prevailing attitude in Russia to homosexuality, but certainly inappropriate and out of place at a dialogue like this, was the priest’s vehement and outspoken condemnation of same-sex relations. “None of us will accept attempts to legitimize same-sex weddings. Only holy matrimony between a man and a woman can assure the continuation of life and we are obliged to prevent dangerous and unnatural promiscuity. I am sure that I speak for my Jewish and Muslim colleagues around this table as well.”

None of the participants openly challenged this assertion — understandable in a Russia where gay rights are an issue that is demonstrably not on the national agenda — but neither did they choose to endorse his remarks. In 2006 and again in 2013, Vladimir Putin initiated legislation outlawing what was referred to as “homosexual propaganda.” This law prohibits anything that, prima facie, seems to be gay-inclined, in the public domain.

Later, Rabbi Rosen who is Director of Inter-Religious Affairs at the American Jewish Committee, was at pains to reject Samoilenko’s remarks, saying that in no way did he see alternative lifestyles as a threat to his own religious beliefs. Rosen, for his part, stressed that despite the internal problems of Israel, virtually the whole population accepts the need for finding the answer to peaceful coexistence. He quoted from the Book of Micah, “Have we not one father? Why then do we violate the covenant of our fathers?”

The next event in this orgy of Jewish events was the rededication of the 100 year-old synagogue. In 1928, during Communist rule, the handsome art nouveau building was requisitioned by the authorities and used as a teacher’s club and then fell into disrepair. Now, at the expense of the government of Tatarstan, Chabad and local Jewish businessmen, it has been refurbished and redecorated. The opening was attended by Rustam Minnikhanov, the President of the Republic of Tatarstan. Rabbi Lazar affixed a mezuzah to the doorpost and Grand Mufti Semigulin said that the rededication of the synagogue was a celebration for Jews, Muslims and Christians alike.

Outside the synagogue, the street had been cordoned off to traffic and some 600 people enthusiastically listened to a concert billed as a “Festival of Jewish Music.” Various groups of singers, musicians, and children presented a program of Jewish and Israeli music and dance, including a spirited rendition of Naomi Shemer’s “Jerusalem of Gold” Yerusalimiskii – Zolotoy Yerusalim, gorod bronzy i sveta, delivered by a young girl from the local Jewish school. The highlight of the performance was the appearance of prominent Israeli musician Hanan Yovel and the Alma Band, who had the audience rocking in their seats and springing to their feet to the strains of Am Yisrael Chai.

But the main focus of the weekend was the first Limmud FSU to be held in Kazan which was dubbed Limmud Volga-Urals. Held in a lakeside resort some 15 kilometers from Kazan, the mostly young Jewish adults in the three-day event came from Kazan itself and the cities of the surrounding areas including Nizhny Novgorod, Saratov, Samara, Chelyabinsk and Yekaterinburg. The 400 participants could choose from over 100 presentations (five or six taking place at the same time) given by speakers from Russia and Israel. Overwhelmingly, the presentations were in Russian, with a few in English or Hebrew with simultaneous translation.

Among popular speakers were Rabbi Yosef Mendelevitch, the Russian refusenik who, in June, 1970, attempted with a group of 16 other dissidents to hijack a plane from Lennigrad and fly it to freedom. The members of the group were arrested and sentenced to various terms of imprisonment. Mendelevitch himself spent several years in the Chistopol prison near Kazan, and this was his first return visit after having been released in 1981. Particularly popular for the Russian-speaking audience was the well-known blogger, Anton Nosik, the poet and actor, Vladimir Vishnevskiy, noted academic Evgeniy Satanovskiy, the singer Irena Rosenfeld, and an enormously popular but rather weirdly named Gefilte Drive Band.

There were workshops in Hebrew calligraphy, a demonstration of krav maga, the Israeli system of self-defense, movie showings, and special programs for children of different ages. And to crown it all, Hanan Yovel and his band presenting “A Musical Journey to Israel,” and later, the songs of Rabbi Shlomo Carlebach, to celebrate 90 years since his birth.

Roman Kogan, Executive Director of Limmud FSU said, “It is always very exciting for us to launch a Limmud FSU in a new community. It is equally important for the local community itself because Limmud, with its special and unique qualities, brings a special message: that of attracting people to a Jewish circle of activity, and Limmud is virtually the only door to such circles. Limmud Volga-Urals certainly lived up to our expectations and was a great success.”

In summing up the festival, the founder of Limmud FSU, Chaim Chesler, who defies the established scientific principle that there is no such thing as Perpetual Motion, said, “Over and beyond the Limmud conference itself, the inter-faith dialogue we convened brought together Moslems, Russian Orthodox, Catholics and Jews — including Chabad, with whom we had not had a working relationship before. The whole Limmud FSU event was an unqualified triumph.”

About the Author
Asher Weill was the editor of Ariel: The Israel Review of Arts and Letters, in addition to Newsview and Israel Scene
Related Topics
Related Posts
Asher Weill
Comments