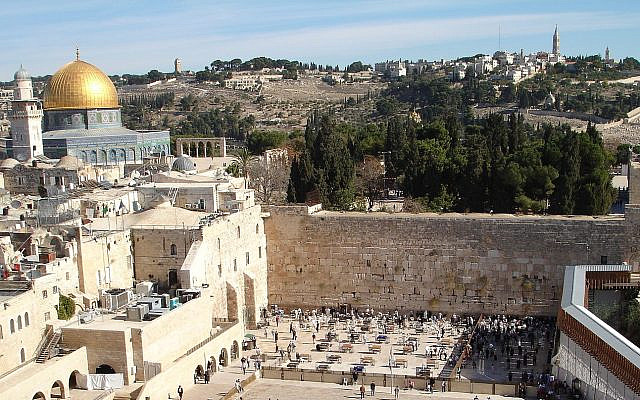 In a world of fault lines, here is the sharpest one -- on the top of the platform, it's the Islamic world and the East, on the plaza at the Western Wall below, it's the Jewish world and the West. (Photo credit: Golasso, CC via Wikimedia Commons)

Yair Lapid is my new rabbi.

I was in despair during the May Gaza crisis, thinking that Netanyahu, like so many right-wingers before him throughout world history, was successfully “wagging the dog” and preserving his power by scaring people.

But then, like Churchill in the darkest days of World War II, Lapid got on my television screen and said he understood our distress, our fears. “Change doesn’t happen when it’s easy,” he said. “Change happens when you believe that it’s the right thing, when you believe your path is correct.”

For just a few moments during the rocket fire, amid the riots by both Jews and Arabs in mixed Israeli cities like Lod, and amid the unfair and inaccurate worldwide condemnation of Israel, my faith, my hope, was restored.

All the political commentators were saying, it was over, that the ‘change’ effort had failed. But Lapid showed no quit. There are still 20 days left before his deadline to form a coalition, he said. “In political terms, that’s an eternity” — זה נצח/ze netzah.

An eternity, he said, just when the rest of us thought all time and hope had run out.

Even if Lapid’s incredibly diverse coalition does not hold together, there’s a lesson here for American progressives. Change doesn’t just come by completely vanquishing your enemies, by blocking their Twitter accounts and ‘canceling’ their representatives on university campuses.

“We don’t have the luxury of just consigning a group of people to say you’re not real Americans. We can’t do that” on the left, said ex-President Barack Obama in a recent interview with the New York Times’ Ezra Klein.

The democratic system in America, Obama pointed out, gives Republicans a natural advantage because they dominate in so many small right-leaning states that get to elect just as many senators as big blue states like New York and California do. That means that polarization works for them. But it will never work for us.

Polarization is the great political challenge we see throughout the world today. It’s not just Donald Trump who is able to appeal to people’s anti-democratic and anti-science, anti-expert feelings. A fault line runs through the world. From Washington, to Ankara, to Warsaw, to New Delhi, to Hong Kong, it’s a struggle between the forces of change and democracy and the forces of a reinvigorated authoritarianism.

It’s a fault line between industrialized nations in the West and developing ones in the global south with its wars and economic deprivation sending immigrants north and fanning flames of resentment among the working class in those northern countries. Even in a place that’s thriving overall as much as post-Communist era Poland is today, the right is ascendant, and there are people who “‘live in a different reality’ based on distrust of all scientific, moral and political authority,” said a small-town Polish mayor trying to promote vaccination, reports the New York Times.

It’s also a fault line between the Islamic world and the lands traditionally rooted in Christian and modernist traditions. In France especially we see an inability of a Western nation to figure out how its Muslim members can line in peace and prosperity.

Lapid’s coalition — born in the nation where these global fault lines are most salient — provides a vision of how these lines can be navigated. In his coalition — a coalition that would make a staunch right-winger Prime Minister — is also Mansour Abbas, an Islamist Arab. No one is promising Abbas a comprehensive peace agreement or a Palestinian state. They’re just promising him that the voice of his minority community will be heard within the halls of Israeli government in a way that has never happened before. And, in turn, he’s showing it’s possible to work for the interests of his community without demonizing all Israelis.

How did Lapid do it? How did he make the magic of bringing Abbas and Naftali Bennett into the same room?

One way is that he wasn’t pretending to solve everything. He wasn’t trying to pretend everything is “simple” like so many American progressives are right now. He said some issues are too complicated to solve completely, but we can still listen to each other, and try to accommodate each other’s needs and desires.

And, maybe, if we can ‘fix it’ here where the fault lines are most deep — where the border between Islam and Judaism manifests physically at one giant, ancient wall — maybe we can ‘make it anywhere.’

Condemning Israel has become very comfortable for many of the left. It’s easy. “It’s simple,” as they like to say.

But, actually, around the fault lines — including the American one between progressives and the Fox News right — nothing is ever simple. Life is complicated. Pretending it’s simple, I think, is a form of assimilationism for progressive Jews. It means they don’t have to have tough conversations with their non-Jewish friends. They can all just sit around together pretending it’s all simple.

And getting nothing done.