These are just some of the names I’ve been called on Twitter over the past few weeks.

The “conversation” around Israel and Palestine has become so toxic, with so much context and information missing, that I feel that trying to influence it is just spitting in the wind. Does anyone calling Jews Nazis or beating us up on the streets of London, Toronto, New York, Miami, etc. actually care about the accurate history  of this conflict?

Is anyone who gets their political information from TikTok songs or Instagram celebrities going to take the time to learn about facts about current events, even if it takes five minutes? Why should they? As Blake Flayton, a Jewish activist said, crediting @blakeezraphoto this is the “instafada” — a war against Israel on social media. 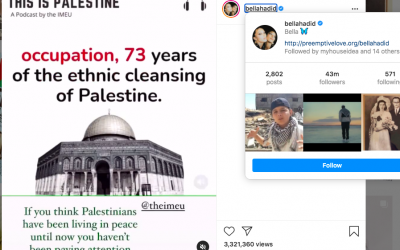 There are 14 million Jews in the world. Bella Hadid has 43 million followers on Instagram. We don’t stand a chance in the battle for public opinion.

And the mainstream media isn’t much better.

Straight up incitement from the NY Times. An entire article claiming that the problem is Jews moving from one city to another city in the Jewish state.

The choice is obvious: Side with the colonial settler baby killers or fight for human rights and dignity?

What could be easier? One side is evil, came from nowhere, took over someone else’s land, is the aggressor, is stronger and therefore is wrong. The other side has just rocks and a burning desire for freedom.

The public is told of Israeli police entering the Al Aqsa mosque (well, “attacking” it), but not of the Arab rioting there that pushed the soldiers to go there in the first place. The public rages about holy places desecrated by Israelis, but it doesn’t hear about the Arabs who made those holy places into war zones. The public hears that Israel has the Iron Dome, and Gaza does not, but never asks why that is.

The public hears “blockade,” but does not know (care?) that Israel expelled all 8,000+ Jews from Gaza in 2005 to give the Palestinians a chance for a state of their own. Instead, Hamas killed a few hundred Palestinian rivals, took the international money meant for infrastructure and prosperity, and instead of building a future for their people, built a jihad machine aimed at Israel. They shot rockets at Israeli civilians and kidnapped and killed soldiers. They’ve waged war against Israel ever since, with an entire generation of Israelis in the south growing up knowing exactly what the 15-second run for shelter means.

The public hears “apartheid wall,” but does not know that it is actually a security fence, built because some Palestinians, whose families receive monthly funds from the Palestinian leadership (the more Israelis killed, the higher the sum) put on suicide belts and blew themselves up while tearing apart as many people as they could. Daily life in Israel was a terror of charred buses and exploded restaurants. Babies, Holocaust survivors, Israeli Arabs, foreigners… no one was safe. Every Israeli knows someone who was murdered in those attacks.

The wall has saved lives — Israeli and Palestinian — by restricting the ability of terrorists to come in with suicide vests. Which leads us to — checkpoints. Why do we have checkpoints? Nearly 200,000 Palestinians come into Israel every day, for work, school, and medical needs. They go through checkpoints to ensure that terrorists can’t get in. Israel has made great efforts to upgrade the efficiency of the checkpoints so that long, hot lines are becoming a thing of the past. They can still be frustrating and horrifically time-consuming, but they are not there in order to torture or humiliate Palestinians.

The public hears of Sheikh Jarrah, but not the entire story. It has been sanitized, of law, of history and of context.

The public does NOT hear about the hundreds of Jewish families removed from their homes in other legal disputes, and it definitely did not hear of the dozens of families who had to leave their homes last week under police escort because of violence from their Arab neighbors in Lod, the burned synagogues, torched cars and riots in the streets.

And so, from what it sees, Israel is evil. Palestinians are righteous. And everything is viewed from this lens.

So, when reports of Palestinian violence and Hamas rockets raining down on Israeli cities emerge, the public has a ready answer: “Well, what do you expect? They’re under occupation. Of course they fight back.”

The public won’t even condemn Hamas when, horrifically, Palestinian children are killed by rockets falling far short of their original targets: Israeli children. Not one word is spoken against Hamas — an actual terror group that makes life in Gaza hell.

Because it is far, far easier to hate the Jews — I mean, Zionists — then to see this conflict for the complicated mess that it is.

And so, all aggression against Jews is legitimated, whether in Jerusalem, Lod, or New York.

It’s to the point that people despair of even saying anything. Why try to counter the calls of “baby killers,” and “From the River to the Sea” (i.e., no Israel)? Why try to speak up and call for peace for both people, when so few hold on to an ideal of a two-state solution anymore? The Jewish state has been delegitimized as an “ethno state.” Most now call for one “democratic” state “from the river to the sea,” with no ethnic character.

Look, it works, it really does. Changing Wikipedia entries to hide Palestinian culpability and using oil money to fund an anti-Israel news network works. Wrapping millennia of Jew-hate in modern American-based race terms cancels Jewish history and the Jewish heritage in the land of Israel completely. Some in the US are absolute masters of this. Members of Congress spout pithy (not really) slogans, trade-in one-sided narratives, and co-opt other people’s struggles to connect Israel/Palestine. They erase Jewish history in this land and the million plus Middle Eastern and North African Jews by painting the conflict as “white people vs. Brown and Black people.”

Jihadism on the streets of central London: “We don’t care about death! We love death!” pic.twitter.com/u47BqUh45y

You did not leave – go research what blockade and siege is. I think Hamas is justified in what it does. Were the jews in the Warsaw Ghetto uprising justified?

So, I still speak out, but not as much. Frankly, it’s exhausting. Watching Jews being attacked in New York and harassed in Germany calls for Jihad in London (as police walk by)… And the abuse of the Holocaust as Jews are compared to Nazis and Hamas to Warsaw Ghetto Fighters is too much to bear. At the end of the day, this is the hill we will die on. Because we have no other hills. Having been expelled from almost every place we have been, the Jews have finally come home. And while we are willing to share this home with the Palestinians, we are not willing to be slaughtered in it.

People around the world can incite against “Zionists,” beat up local Jews, and make them fear their current neighbors, but they should know that they will not win; they will simply drive the Jews away — into Israel’s waiting arms.