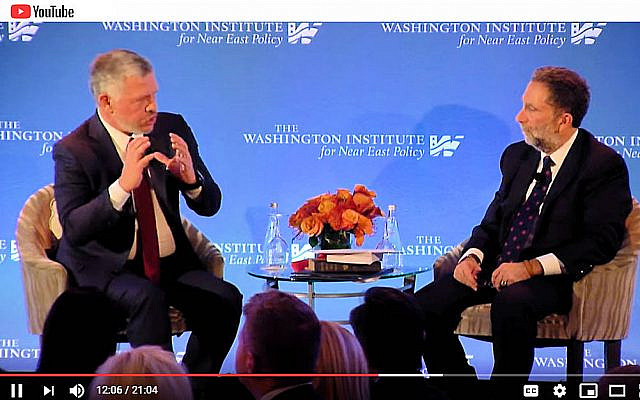 Along with the other concerned and curious around the world, I’ve been tuning in frequently to the impeachment hearings.

Many speakers have mentioned rule-by-monarchy as the bogey man looming large. “The United States Constitution is anti-monarchical” is an oft-repeated mantra.

So it was with shock and alarm that I listened to last week’s conversation between the Jordanian dictator King Abdullah II and the Washington Institute for Near East Policy’s executive director Dr. Robert Satloff, an expert on Arab and Islamic politics as well as on Jordan and on U.S. Middle East policy.

The exchange was video-recorded [here] before an audience, immediately after that esteemed think tank awarded Abdullah its highest honor, the 2019 Scholar-Statesman Award.

Dr. Satloff’s admiration for his Jordanian friend was evident throughout. He dubbed it “our very special conversation”, never addressing the King without appending “Your Majesty”.

He sought advice from him on the most pressing issues challenging world leaders, including ISIS:

“How would you describe the challenge of radicalism and extremism in this era today to Jordan specifically and more generally?”

But what truly blew me away was when Dr. Satloff focused on the Arab Spring and on the current protests gripping the Arab World. First, he invited Abdullah’s take on the phenomenon. Abdullah suggested two possible explanations:

“The leaders don’t understand, or regional politics is being played by Arab and non-Arab actors.”

Satloff responded to that with this shocker:

“One thing you can say looking at both waves. The monarchies seem to have avoided this. Jordan, Saudi Arabia, Morocco. What’s the secret recipe?”

“I think you should answer that.” [Laughter]

“Monarchies in the way I was brought up by his late Majesty [King Hussein] and he was brought up by his father and his father is: We’re there for all of society. You know, we are fortunately or unfortunately, in many parts of the third world, tribally-based. When you have a small monarchy like we have in Jordan and like you have in Morocco, we’re the balance therefore for everyone in society, whether you’re Muslim or Christian or Jewish. Whether you’re tribal or you’re a farmer. We are the ones that make sure that everybody is protected and everybody is supported. And I think that’s what’s helped the monarchies be stable, doing a very difficult task for our region.”

Satloff accepts that and proceeds to plug the King’s recently published book. 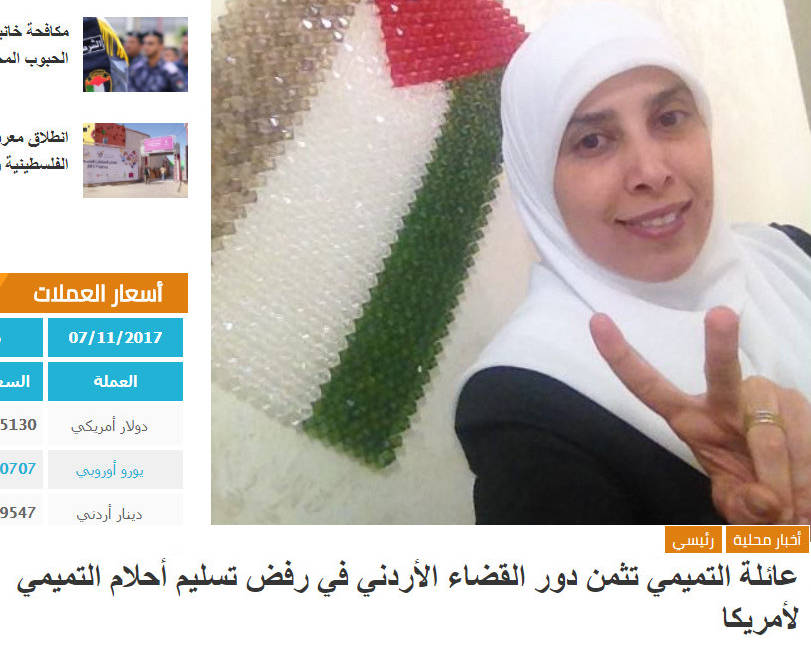 Now add to this the fact that the royal object of Dr. Satloff’s fulsome fawning has been defying a U.S. demand for extradition of one its most wanted terrorists for the past six years, Ahlam Tamimi.

And the fact that there is a signed, sealed and perfectly valid extradition treaty between Jordan and the U.S. (though Jordan now says it’s invalid) – and the above exchange becomes positively mind-boggling.

Yes, the very man whom Dr. Satloff adores is shielding a confessed mass murderer from facing trial in a U.S. Federal court. Three of her sixteen victims were U.S. citizens. One was my precious child, Malki.

In a widely-viewed video clip, Tamimi smiles on being told that the bomb she set had killed more children – eight – than she had presumed. This is the evil that King Abdullah II of Jordan enables to evade justice.