The Blogs
Walter Hilliger
Homme de lettres
Apply for a Blog
Advertisement
Please note that the posts on The Blogs are contributed by third parties. The opinions, facts and any media content in them are presented solely by the authors, and neither The Times of Israel nor its partners assume any responsibility for them. Please contact us in case of abuse. In case of abuse,
Report this post. 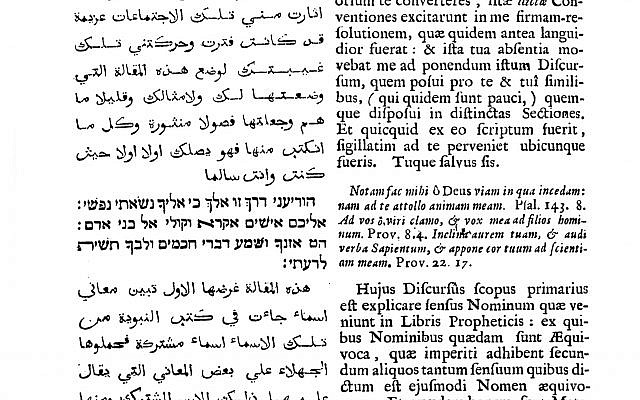 Introduction in Arabic and Latin to the Guide read by Leibniz in 1696, addressed to Yoseph Ben-Yehuda (c. 1160–1226) by Maimonides. Thomas Hyde, 1690. (Image in the public domain under the public data regime resulting from the digitization of the collections of public cultural institutions)

20 Tevet marks the 818th commemorative anniversary of Maimonides ז”ל, author of the most translated medieval work, entitled “The Guide”, which influenced scholasticism until the V Lateran Council.

Translation of the image’s extract:
“Following our separation and your departure to another place, our discussions revived in me a resolution which had weakened, and your absence prompted me to compose this treatise which I wrote for you and your peers, however few they may be. I made some divided chapters, and all that I put in writing for you will arrive successively where you will be. Be well.

This treatise is first intended to explain the meaning of some terms that occur in the prophetic books: some of these terms are ambiguous, among several meanings, the incompetent take the equivocal one; others are metaphorical, and they translate them univocally. Others are analogies so they can have multiple meanings when they think them having only one.”