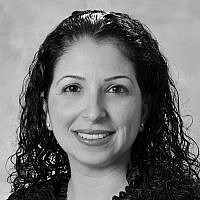 The Blogs
Shira Ruderman
Apply for a Blog
Please note that the posts on The Blogs are contributed by third parties. The opinions, facts and any media content in them are presented solely by the authors, and neither The Times of Israel nor its partners assume any responsibility for them. Please contact us in case of abuse. In case of abuse,
Report this post.

The coronavirus crisis has taken a heavy toll on Jewish communities in the United States, but if institutions choose to be wise and follow a path of change, efficiency and social diversity, this obstacle could mean progress.

Following the devastation brought on by COVID -19, many Jewish institutions and organizations in the United States are facing severe crises. These same crises are severely damaging the stability of the Jewish communities in America, which rely on these institutions.

Synagogues and summer camps are closing, schools and community organizations are cutting staff, and federations are being forced to shut down programs. Indeed, Jewish Federations of North America (JFNA) was forced to reduce their staff by about 21 percent.

However, the challenges of the Jewish community in the United States did not begin with the outbreak of the pandemic. The community has been in a state of stagnation for some time, and suffered from obsolescence in their methods of action and decision-making. On the eve of the crisis, there was a lack of ethnic and gender diversity across institutions and organizations; the various layers were not faithfully represented by the leadership of its institutions, and some Jews who define themselves as “Jews of color” feel they are not sufficiently represented at the administrative level. In addition, only about 14% of non-profit Jewish organizations are led by women.

When a crisis hits hard, the complex relations with Israel are pushed to the margins, and the rift between most Israelis and Jews in America increases. The stagnation in these institutions is what prevents them from leading substantial action and being successful in creating change. The lack of diversity and outdated organizational structure is not beneficial to the complex relationship with Israel and cause distance and alienation among the younger generation of Israelis, who do not experience emotional or value connections with these institutions they perceive as irrelevant.

Precisely now, amid cuts in staff and budgets, the ground is ripe for change to turn the crisis into an opportunity. The institutions of American Jewry must refresh their ranks with a more ethnically and gender-diverse human capital: more minorities and women. The absorption of new and young workers from different backgrounds and worldviews would help to create a closer connection with these communities in the United States and their new generation by changing their outdated image in the minds of millennial Israelis, and the Israeli public might identify more with their actions and the importance of the connection between the two sides.

To continue the momentum of change, this is also an opportunity to reform the economic model of most Jewish institutions in the United States. Donations have been reduced and income from membership fees has stagnated following the cancellation of activities. To address this, institutions need to move to models of crowd funding and payment by project participants. When the funding comes directly from the community, institutions better understand its needs and desires, and enjoy diversity in the human composition and nature of the activity. This way, the involvement of the community itself in the action will increase.

In this context, it might be pragmatic to reduce the duplication currently practiced among institutions which launch projects too similar, some even identical. This duplication splits the community and causes a waste of resources. Connections and collaborations will help institutions reach a wider audience, launch smarter projects and save costs.

Such savings may also come from switching to digital activity. This transition is not without its drawbacks, but if it is wisely planned, it can help awaken dormant audiences who are not yet taking advantage of the institutions’ programs. By offering more unique virtual activities, organizations will be able to engage diverse and distant audiences while saving resources.

Such streamlining can contribute to strengthening the connection with the younger generation of Israelis, as they will identify more with a community whose institutions have an up-to-date spirit, connected to the Internet and social networks.

The coronavirus crisis has taken a heavy toll on Jewish communities in the United States, but if they follow a path of change, efficiency and social diversity, this obstacle could mean progress, not only for American Jews but also for the young people of Israel.

About the Author
Shira Ruderman is the Israel Director of the Ruderman Family Foundation, which supports innovative programs that foster the inclusion of people with disabilities in the Jewish community and Israel; Follow the foundation on Twitter, or read their blog, zehlezeh.wordpress.com, to learn more about becoming an inclusive society
Related Topics
Related Posts
Comments