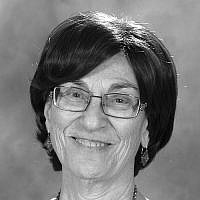 The Blogs
Yaffa Ganz
Apply for a Blog
Please note that the posts on The Blogs are contributed by third parties. The opinions, facts and any media content in them are presented solely by the authors, and neither The Times of Israel nor its partners assume any responsibility for them. Please contact us in case of abuse. In case of abuse,
Report this post.

The following is unsophisticated, undiplomatic, simple, stark and direct. It is also politically incorrect, uncomfortable and difficult for many people to hear. (The truth often is.) Which is why even those in the government of Israel who accept these principles have trouble articulating them for the public. As a private citizen, I have the luxury of speaking freely (after all, I do live in the only democracy in the Middle East…) and of saying what people – especially Jews — all over the world intuitively know and believe is true. Therefore,  I hereby proclaim….

1. The Land of Israel — the “Holy Land” — is the Divinely bestowed, Eternal Heritage of the Jewish People, promised by God to the descendants of Abraham, Isaac and Jacob.  It has been the indisputable, historical Jewish homeland since the time of Abraham, 3744 years ago. Look it up in the book of Genesis.

2. The Temple Mount is holy because God chose it as the site for the Beit Hamikdash – the  Holy Temple. The First Temple was built here in the year 833 B.C.E. , fifteen hundred years prior to Mohammed and the rise of Islam  (despite wishful Arab claims to the contrary). The two Temples stood on this spot for a total of almost one thousand years. Six hundred years later, in the eighth century, the gilded Dome of  the Rock (the Mosque of Omar) and the El Aksa mosque were built on the site.

3. Jerusalem is the Eternal capital of the Jewish people. Jewish Biblical tradition claims the city and the Temple Mount from the time of Abraham down to King David down to today. Jerusalem is the geographic and spiritual heart of Jewish existence in this world. It is mentioned more than 600 times in the Bible and scores of thousands of times in Jewish sources (and not even once in the Koran). All Jews everywhere turn to face Jerusalem in prayer. (Moslems turn to face Mecca.) As is God Himself, so too are Jerusalem and the Jewish People – one, eternal and indivisible.

4. Jerusalem, Hebron, Bethlehem, Nablus, Gaza and Jericho are all ancient Biblical cities – Jewish cities – part of the legacy of the Twelve Tribes of Israel and home to continuous Jewish settlement from Biblical times until the late nineteenth-early 20th century. They are full of Jewish holy sites, burial places, archeological remains and historical memories – witness to an unbroken Jewish presence in the Land of Israel.

5. Palestine and the Land of Israel are one and the same. The name Palestina was given to Judea – the Jewish Kingdom – by the Romans after the destruction of Jerusalem. It was an  attempt to wipe out the memory of the Jewish people who had fought so valiantly against the Romans, engaging Rome’s best troops at great cost and forcing Rome to call in their army from distant parts of their Empire . The Philistines had been part of a large scale immigration to southern Canaan in the 12th century BCE (that’s twelve centuries before the  destruction of Jerusalem by Rome. They are assumed to have come from Anatolia and Cyprus. At that time, the Land of Israel was known as Canaan after the various Canaanite tribes who had immigrated there. The Philistines ceased to exist after the first Jewish Kingdom in the time of David.)

6.  A Palestinian “Nation” never existed – not in Palestine, not in Israel, not on the West Bank, not on the East Bank, nor anywhere else. After the defeat of the Roman Empire, Palestine was conquered and colonized by Byzantines, Moslem Caliphates, Christian Crusaders, Egyptian Mamluks, Ottoman Turks and was then placed under British rule after World War I. They all came, conquered and disappeared. The Arabs themselves migrated to Palestine from the east during the great Islamic conquest in the 7th century. Nonetheless, from the 7th century until the twentieth, a sovereign, Arab, Palestinian “nation” or state was never established in the area, because there never was a separate and distinct Palestinian entity.  “Palestine” was simply the southern section of Syria. In 1917, Britain was given control over the area by the League of Nations and with the Balfour Declaration proclaimed “Palestine” as the Jewish National Homeland.

7. Today an Arab-Palestinian state does exist. It is called Jordan. In a total reversal of declared policy designed to placate and appease the Arabs, Britain withdrew from the Balfour Declaration and the commitments she had made to the League of Nations in accepting the Mandate over Palestine. It was a morally despicable decision which severely restricted Jewish immigration to Palestine and cost the lives of countless refugees from Hitler’s hell in Europe. 80% of the original Mandate designated as the Jewish Homeland was now given over to Abdullah and eventually became the Kingdom of Jordan. The remaining 20%  became the State of Israel. (Please digest those numbers.) Interestingly enough, until 1948, it was the Jews in Palestine who were known as the “Palestinians”. The Arabs refused to be called by that name. They were “Arabs“, part of the great Moslem-Arab brotherhood stretching from Saudia  Arabia to the sea. Today, with 80 % of the territory of the Palestine Mandate and a population composed of 70% Palestinian Arabs, Jordan is the Palestinian state.

8. We therefore vehemently oppose the creation of a second,  additional Arab state inside the already emasculated borders of the Jewish homeland. There are a multitude of Arab states in the Middle East. Israel, including Judea, Samaria (the “West Bank” which is the Biblical heart of the country) and Gaza (which Israel left in 2005),  is a microscopic island in a great sea of Arab nations. (Look at a map of the region. I guarantee that you will be so astounded at our miniscule size that you will not believe what you are seeing.) These Arab nations all speak the same language, practice the same religion, share the same culture and are virtually one people. Any Arab who desires a national homeland has a rich array to choose from. We Jews have exactly one. The God given Holy Land, the Land of Israel. Recognized by all of Western Civilization as the Land of Jews since time immemorial.

9. In addition, the Middle East is now almost completely Judenrein. Except for tiny remnants in Egypt, Syria and Iran, there are no Jews left in the vast, Arab Middle East. Six hundred thousand Jews (some from communities which were two thousand years old) were forced to flee their Arab host countries in 1948. (But who ever heard of a Jewish refugee problem???) Yet Arabs live, work and move freely throughout Israel (despite what you are told by the media. If you don’t believe it, come and see for yourself). The country – the only one in the Middle East – is open to any Jew, Moslem or gentile who desires to live here as a loyal, law-abiding and peaceful citizen. In addition, in almost all Arab countries today, Jews are not first-rate citizens, cannot purchase land, have no rights of domicile. Even in “progressive Jordan”. The Palestinian Authority, for example, declared that selling land to a Jew is punishable by death.

11. Remembrance is a Jewish trait and obligation. We remember the Exodus; we remember ancient and contemporary Amalek; we remember the Sabbath. We remember our beloved Jerusalem; we remember our Land. We remember where we came from, who we are and where we are going, even though we may sometimes temporarily go astray. The Land of Israel has always belonged to, now belongs to, and will continue to belong solely to the Jewish People. The Jewish State was created – and is destined to remain – a Jewish State in our God-given Land, divinely promised and lovingly, faithfully, passionately remembered for close to four millennia. We have finally returned home.

12. The world would therefore be wise to take note… that even as our beleaguered Government stumbles and stutters, trying valiantly to steer clear of disaster and keep us afloat in a tidal wave of anti-Semitism, world pressures and conflicting international interests, the Jewish People did not return home to be sacrificed, slaughtered or sent back into exile.

Because we are so fiercely independent (and democratic), everyone here must have their say, we are slow to move into battle formation. But make no mistake. We stubborn, stiff-necked, difficult Jews do not intend to commit national suicide in order to make life easier for international coalitions or to insure their goodwill. We will wage a bitter war against those who rise up to harm, kill, destroy or remove the Jewish People from the Jewish Land.

The children of Abraham, Isaac and Jacob have brought the world untold benefits – holy concepts, human dignity, wisdom; eternal values, unending knowledge and immeasurable progress. (Find a good history book which doesn’t downplay the peerless Jewish contribution to civilization and start reading.) Our reward has often been a tidal wave of hatred and suffering, forcing us to live by our wits, and when that failed, to go like faithful sheep to the slaughter. Now that God has arranged our return to our Land  after two thousand years of exile and has brought so many of us home, we have a strong suspicion He wants us to stay put. With His help, we intend to do so.

About the Author
The Ganzes came on aliya in 1964, are the parents of five , the grandparents of many more and the great-grandparents of a growing clan. Ms. Ganz is the author of more than forty children's books , several books of essays, hundreds of articles in Jewish publications, a history book and a book of poetry. She is the recipient of the prestigious Body of Work Award from the Association of Jewish Libraries in the United States for her "outstanding contribution to the field of Jewish Literature for Children."
Related Topics
Related Posts
Comments