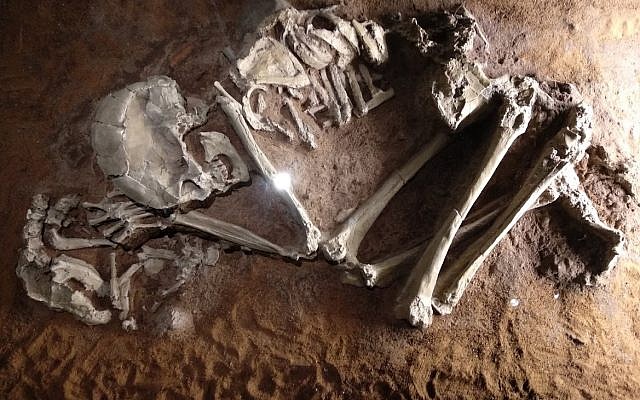 It is difficult to look away from this image. In a 12,000-year-old burial pit, the skeleton of a woman lies in a fetal position, with her hand cradling the head of a puppy in a gesture of affection. At a time when humans made simple stone tools and lived in semi-permanent dugout homes with stone walls and thatched roofs, this woman was demonstrating that the domesticated canine was already part of our story.

This is Eynan, the site of a village from the “Natufian” culture, among the first permanently settled villages in human history. By the shores of the Huleh Lake, about 16 miles north of the Sea of Galilee, lived a hunter-gather community of a few dozen souls, who discovered that settling in one place with access to water, game and wild grains was a wise idea, and thus was born a concept we take for granted: the village. A permanent settlement requires a place to bury the dead, and there are indeed many graves in Eynan. Most were found in family groupings, some interred inside their own homes and often with valuable decorative objects and ceremonial jewelry. But only one was buried with her puppy.

In addition to being among the very first examples of permanent settlement, this is the earliest direct evidence of the domestication of an animal.

How did this even happen?  How did dogs become part of the primitive Natufian village? One theory is that dogs (originally wolves) developed a taste for human leftovers. Dogs can crush animal bones with their strong jaws: humans cannot. Thus the dogs began to linger near human groupings, and as time went on the species began to accept each other as non-threatening neighbors. Ultimately, the dogs, pack animals by nature, began to perceive the humans as an extension of their pack. The humans benefited from the dogs as a security system. When the dogs defended their food source from other carnivores, or even other humans, they were essentially defending the village. The idea of “pets” is a modern one; what we are looking at here is two packs from two separate species slowly becoming one community.

One can only speculate about the relationship between the woman and her little dog. Was she buried with the dog for her protection in the afterlife? Or perhaps the reverse? Or were they companions, so attached to each other in life that it was fitting to continue the connection in the beyond?

This leads to deeper questions, such as what it means to be human and how we differ from animals. Fortunately there is a remarkable new museum in Tel Aviv that addresses these questions: the Steinhardt Museum of Natural History. This building, on the campus of Tel Aviv University, is designed to resemble Noah’s Ark and is a tribute first and foremost to biodiversity, one of the unique (but endangered) blessings of Israel. The museum highlights Israeli flora and fauna, but ultimately is dedicated to the entirety of the natural world. Like many natural history museums, but often in a new and delightful way, this one takes us step by step through form, function, taxonomy, ecosystems, and modern challenges.

But a special treat awaits the visitor on the top floor: “What Makes Us Human?” Among the many eye-opening exhibits in this unique series of archaeological and multimedia displays are prehistoric skeletons that have successfully endured trepanning (removing bone from the skull), which was history’s first surgery; a 12,000-year-old giant stone mortar and pestle for grinding nuts and seeds; a heel bone with a nail pounded through it from a crucifixion; and beautiful jewelry from before the invention of written language. We are inventive, we are cruel, we are empathetic, and we are artistic.

And, apparently, for at least 12,000 years, we have had a weakness for puppies. Of course it might be that we enjoy hanging out with canines not because it is part of our nature, but rather it has become part of our nature because they have been around us for so long. Do we like puppies because they are objectively cute? Or does the human concept of “cute” include dogs because we have come to rely on them to bark when enemies approach?

Today’s humans have found new ways, some inspiring, some perverse, of taking advantage of this affinity. We use dogs and their incredible sense of smell to sniff out bombs, drug smugglers and tumors. We use dogs to guide the blind and comfort trauma victims. And of course, they are in the movies, in comic strips and on lunch boxes. But somehow, it seems the unique bond between humans and “man’s best friend” is still best represented by that eternal coupling preserved in the fossil of the prehistoric Natufian and her puppy: a succinct portrayal of affection as well as a mutually beneficial survival mechanism. Perhaps this is the very essence of friendship.