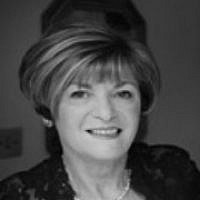 The Blogs
Gillian Caplin
Apply for a Blog
Advertisement
Please note that the posts on The Blogs are contributed by third parties. The opinions, facts and any media content in them are presented solely by the authors, and neither The Times of Israel nor its partners assume any responsibility for them. Please contact us in case of abuse. In case of abuse,
Report this post.

Are we behind the times? It seems like in North America and even in England, women are already presidents of synagogues and philanthropic organizations. I don’t think we are behind the times but rather I see myself as the successor to talented and dedicated leaders who have given their all to help the Jewish people, wherever they may live.

I do think perhaps, that we are ahead of the times. Recently, all the talk in the US has been about the Pew research study and the doom and gloom predictions for Conservative Judaism. Our past president, Rabbi Alan Silverstein has written a beautiful response to the naysayers that was published at the Times of Israel website. But Alan only spoke about the US, not other parts of the world where Masorti Judaism is growing and thriving and includes young and old alike.

Take Hungary. Hungary is not a great place to be a Jew right now, with its right wing government and echoes of Nazism. But there is in Budapest, a strong core of young Masorti Jewish adults, who run a MAROM Center, providing programs for young Jewish adults and who also founded Chir Hadash, a Masorti Kehilla. In the span of a year, the municipal government in Budapest moved the MAROM group out of the building, which also housed the kehilla, with little or no notice.

Not being people to give up, the group worked hard to bring attention to their plight and to find funding and a new place to continue their activities. With great wisdom, Masorti Jews in Budapest understand that they must work together with other minorities to secure their own rights and the rights of others. Each summer, on the banks of the Bank River, Bankito is held. A Shabbat and weekend geared toward the “other” and to putting in action some of our greatest Jewish values.

Moving around the globe to Argentina. In the religious world, with the election of an Argentinian Pope, Argentina has been in the spotlight. Most Jews in Argentina and in Latin America as a whole, identify themselves as Masorti/Conservative Jews. It also became known that one of the closest friends’ of the Pope is a Masorti Rabbi in Buenos Aires, Rabbi Abraham Skorka. Rabbi Skorka co-authored a book with then Archbishop Jorge Bergoglio and filmed 30 television shows with him. The book, “On Heaven and Earth” records their dialogue on current issues, and has served as an insight into how the Pope thinks and has been translated into more than 10 languages.

The Masorti community across Latin America thrives through active NOAM youth programs where the norm is to study in Israel for a year after graduation. One of the NOAM youth groups in Brazil even raised enough money on their own to bring Moshe Ben-Ari, a popular Israeli singer for a concert there. There are day schools, preschools, summer and winter camps, and the Seminario Rabinico Latinoamericano Marshall T. Meyer, which ordains rabbis and cantors and teaches Jewish education as well.

Back to the northern hemisphere, where in the summer of 2011, a new Masorti/Conservative rabbi was installed at the kehila in Kiev, Ukraine. Rabbi Reuven Stamov, a product of the Masorti movement there (especially the Ramah summer camp), went to Israel to study and returned to Kiev with his Israeli wife and young daughters. They started out in a small apartment that served as their educational center and shul. Recently, they moved to a bigger space due to their growth and success. The community gathers on Friday nights for services and a potluck dinner, they sponsor a professional dance troupe who performs to Jewish and Israeli music, they are learning how to read Torah and this month will hold their 2nd annual family camp.

The Masorti movement worldwide acknowledges the importance of the North American Conservative Jewish communities with whom we share a partnership and common values, as well as our involvement with Masorti Israel. We share a view of Halacha that merges tradition and modernity and support for the State of Israel, as a democratic and pluralistic state, is a central tenet of the entire movement.

Conservative/Masorti Judaism has rejuvenated itself everywhere that Jews can be found. It will continue to do so.

About the Author
Gillian Caplin is the Incoming President of Masorti Olami – the Worldwide Council for Masorti/Conservative Synagogues. Born in Birmingham, England, she has lived in London for many years. She was one of the founders of Masorti UK and served as president of Masorti Europe. She is also on the Board of Governors of the Jewish Agency. Gill previously worked as a journalist for the BBC and other independent production companies.
Related Topics
Related Posts
Comments