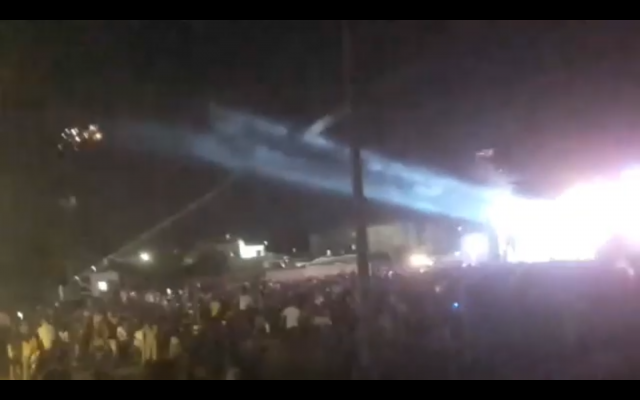 An Iron Dome interceptor explodes in mid-air over the town of Sderot, apparently as it shoots down an incoming rocket from the Gaza Strip, on August 25, 2019. (Screen capture: Instagram)

Make no mistake about it. Last night, in Sderot, there was a multi-casualty terror attack. Thousands of people are traumatized today: children whose emotional wounds caused by the panic of rockets exploding so close to a crowded venue where there was limited freedom for movement and limited opportunity for escape and virtually no saferooms. Parents who need to quell their fears of taking their kids to an outdoor event in their home town ever again. Kids who were separated from their parents for those few terror-filled minutes. Teens who were on their own, having gone to party with their friends. People who totally lost it: panicked and stampeded, with gates locked around them. Some fainted on the ground. Those teens are our soldiers of tomorrow, and will be drafted to the IDF someday, together with pre-service post-trauma, as a package deal. Because they have grown up as the flack jacket of their country.

Hamas knew of this two-day outdoor summer festival. It had been advertised publicly on all the media. They knew, and they shot. What kind of country allows that to happen? Allows that to slide by?

Where is my government? I don’t give a damn that there are elections coming up. This is an intolerable situation that is tolerated by my government, allowed to simmer on a low flame, because we are in the periphery and electoral seats are at stake. If this had happened in Tel Aviv, the response could not have been merely cutting back petrol supply to Gaza (in fact, that will only make the situation more combustable). And if any of the elected leaders in our Knesset say there is no solution, let them give back their keys! They don’t deserve to serve us!

Where are the enraged people of Sderot? We, in the different citizens’ groups (Soldarity with the South, Movement for the Future of the Western Negev, etc) have SUCH a hard time convincing people to join us in our different forms of protests, all demanding from the government to deal with the problems here… maybe this will be the catalyst for the citizens of Sderot to get up off their couches and do something about it. I am not trying to blame the victim. I am a victim, too. It’s not easy — we have been living in this War of Attrition war zone for 18 long years. But I am not willing to sit quietly, without calling my government to task demanding that they start doing their jobs. Nor should any other resident of the Western Negev. Instead of attending a service today, commemorating the death of one of my community members, Shachar Melamed z”l, who was murdered by a Hamas rocket on August 26th, 2014, together with Zeevick Etzion, while trying to restore the electricity supply that had been cut off earlier that morning by a previous rocket barrage, we could have found ourselves attending multiple funerals of people who could have easily been killed in Sunday night’s attack.

I do not call for war (though war may be the only way out). I call for action. I call for *responsible strategy* and *planning* and *action*.

Wake up, Israel. Smell the gunpowder.